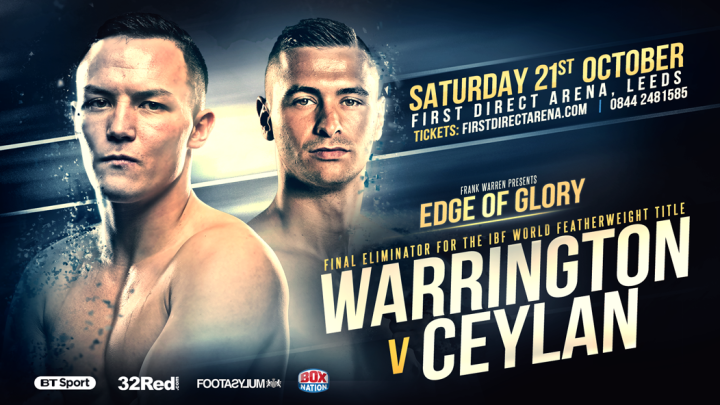 Yet another attractive all-British showdown could be on tap for early 2018.

On Saturday, unbeaten English featherweight Josh Warrington stopped Dennis Ceylan in the 10th round of what was billed as a final eliminator for the IBF title currently held by Welshman Lee Selby.

The bout was held at the First Direct Arena in Leeds, England, and was scheduled for 12.

Warrington, who hails from Leeds, decked Ceylan in the 10th with a sharp cluster of hooks. The Danish fighter was as fatigued as he was hurt and Warrington was never going to let him off the hook. Another two-fisted burst floored the visitor and referee Michael Alexander counted him out. The official time was 1:43.

“I hurt him early on and went for it too soon because my boxing went out the window,” said Warrington in his post-fight interview with BT Sport. “But I got there in the end. Once I started doing what I was told, things started working. I just wanted to win so bad.

“I’ve got no problems fighting the Welshman (Selby) as long as it’s up here (in Leeds). This is what I want. This what all these (fans) want. If we can make it at Elland Road (Leeds soccer ground), then let’s have it.”

The word is that Selby vs. Warrington could take place in March.

In the co-feature, Jack Catterall won a hard-fought 12-round unanimous decision over cerebral switch-hitter Tyrone Nurse. It was a messy affair, but the better man earned the decision. The official scores were 118-111, 116-113 and 115-114.