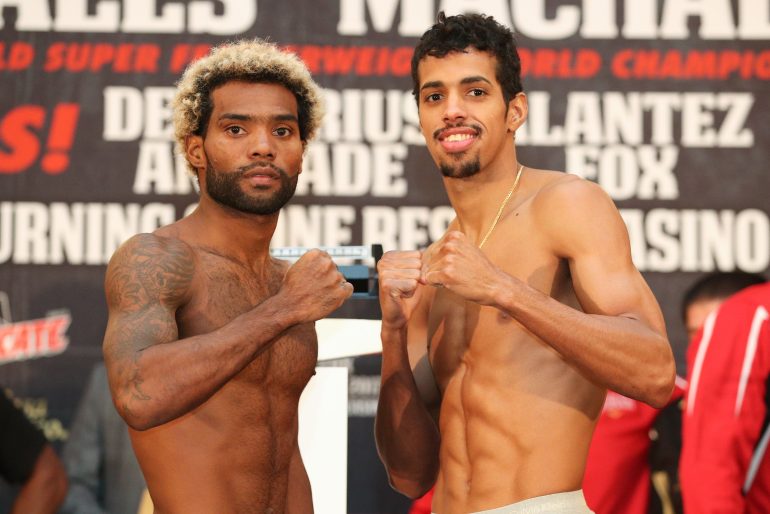 Jezreel Corrales’ title reign ended before he ever was able to truly capitalize.

The Panamanian fighter parlayed an upset over Takashi Uchiyama into a deal with Golden Boy and consecutive fights on HBO, but on the eve of his first American television main event, his WBA belt has been lifted.

Corrales (22-1, 8 knockouts) weighed in Friday at 133.25 pounds for his 130-pound title defense against Alberto Machado. The challenger weighed in at the junior lightweight limit and is eligible to win the title.

If Machado loses, the title will become vacant.

Corrales-Machado will headline HBO’s Boxing After Dark on Saturday from Turning Stone in Verona, New York. Demetrius Andrade (160 pounds) will make his middleweight debut in the co-feature against Alantez Fox (160).

Machado, a 27-year-old prospect from Puerto Rico, is fighting for his world title after scoring a bevy of knockouts over limited opposition. Machado (18-0, 15 KOs) had a 12-fight KO streak heading into his last outing, a decision victory over Carlos Morales in August. That was the first time he’s been 10 rounds, with most of his bouts inside one or two.

“Working with Freddie Roach has been great,” said Machado. “He prepares me and gives me the confidence necessary to be successful. His experience working in world title fights, along with the work in the gym, will be the key to winning this fight.”

Corrales, of course, will present a much more formidable challenge.

The quick-moving southpaw is a crafty power, and despite scoring just eight knockouts in 23 pro fights, his power seems to be improving.

The 26-year-old iced the Japanese legend in April 2016, and after outpointing him in the rematch, Corrales scored a technical decision win over Robinson Castellanos in July. Corrales was on the deck in that bout, but also scored a knockdown.

So Corrales may have hurt his standing with his unprofessionalism, but the fight goes on, and he’ll have an opportunity to make people forget with his in-ring performance.