After first loss, Sean Monaghan says he has a ‘lot more fighting left to do’ 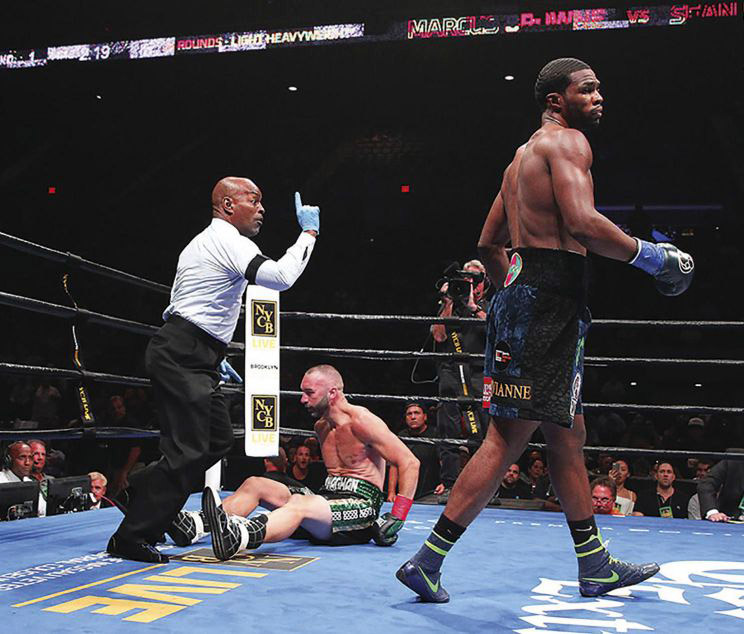 Walking back to the locker room after his first career defeat, Sean Monaghan went through a range of emotions. Disbelief, for one, in the hand speed that Marcus Browne exhibited when landing the straight left hand that sent him down 40 seconds into the fight last July. There was also disappointment after getting himself in “amazing shape,” only to have the fight end early in the second round.

“I was ready to get in there and win that fight. And Marcus’ hand speed just put me down right away, which was a shock to me,” Monaghan (28-1, 17 knockouts) says about a fight he can’t bring himself to watch on replay.

“I’d be lying if I said I wasn’t beating myself up. I was haunted by the loss. I couldn’t stop thinking about it,” Monaghan continues. “If I would’ve lost to Marcus in a great, great fight, a fight that was thrilling, that would’ve been a lot better. But I looked like I was completely overmatched in that fight, which isn’t the case. I just got jumped early.”

But even in that long walk backstage at Nassau Coliseum, in front of many of his biggest supporters in his home region of Long Island, there was resolve that, in the 220 seconds the clock was running, he could learn a lesson that would make him a better fighter.

“I was telling myself – I swear to God – if they let us do that again right now, that would not happen again,” Monaghan says. “I don’t really know what to make of that still. I just know I’ve got a lot more fighting left to do.”

The light heavyweight from Long Beach, New York, will take that first step toward rehabilitating his career on November 4 when he faces Colombia’s Evert Bravo (23-6-1, 17 KOs) in an eight-round bout at Barclays Center in Brooklyn, in support of the WBC heavyweight title rematch between Deontay Wilder and Bermane Stiverne.

Monaghan has seen some footage of Bravo, enough to say he “doesn’t look like he takes a great shot but he punches hard enough.” And just as he has, since his days as a New York Golden Glover, the 36-year-old Monaghan is back at the Freeport PAL working with trainer Joe Higgins. He knows it’ll take a few wins to get people talking about him in the same breath as Adonis Stevenson again. He also acknowledges the benefit of having a significant following in New York, which makes him a coveted undercard attraction for promoters.

Signing for the Browne fight meant signing with Lou DiBella. DiBella says Monaghan “didn’t look like himself” when he walked into the ring. But the New York promoter has already been brainstorming a way to bring Monaghan back in a meaningful manner, saying he’s had “some preliminary talks” with Joe Smith Jr. and promoter Joe DeGuardia about an all-Long Island showdown at Nassau Coliseum between two of the biggest ticket-sellers in the region.

That fight will have some time to simmer as Smith (23-2, 19 KOs) recovers from the broken jaw he suffered in his own July loss — a unanimous decision to Sullivan Barrera.

Even after the defeat, Monaghan holds no ill will for Browne, the unbeaten Staten Islander he describes as “a special talent.” Browne figures to be on deck for the winner of WBC light heavyweight titleholder Stevenson’s upcoming defense against mandatory challenger Eleider Alvarez. Monaghan says he can’t pick a winner but hopes Browne beats whoever emerges between the two.

“When Marcus gets the winner of that, I’m rooting for him because, if I lost to a world champion, it makes me look better,” said Monaghan. “I’m looking to get my own world title shot…the good thing about losing to a guy of Marcus’ caliber is that it takes only two-to-three fights to come back, when you lose to a top, top guy. If I would’ve got knocked out by some journeyman guy, then you fall all the way back down the ladder.”

November 4 will be Monaghan’s first opportunity to put to rest some of the ghosts from his last outing but he knows he’s got plenty of work left to do.

“I’m just using that frustration as more fuel for my fire because I know that all the naysayers said, ‘See, I told you that kid sucked.’ I’ve got a lot of proving myself to do.”