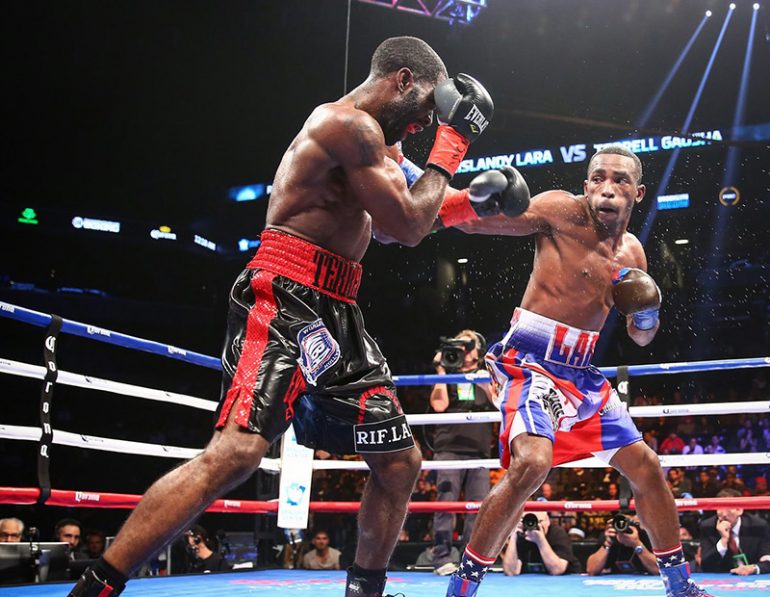 BROOKLYN, N.Y. – Erislandy Lara prevailed as the prohibitive favorite in the countdown to his featured fight at Barclays Center Saturday night, which ran as the main event on a Showtime collection of bouts.

Terrell Gausha, not unskilled, but not at the level of the Cuban pugilist-specialist, who has forgotten more moves than most of the young guns know, wasn’t expected to be able to handle the speed and movement and ring generalship of the 34 year old who now makes his home in Texas.

Many came here hoping that we’d get a good fight, at least, that Lara would be looking to impress. Alas, the boo birds were hooting for periods of the 12 rounds elapsed, and a multitude of cheering came when the bell clanged to signal the end of the final round. Lara did his smart boxing, took few risks, pecked with his jab a whole lot and nobody was surprised when the scores were read: 116-111, 117-110, 117-110, for Lara.

Only a scant remainder of the 7,643 announced were there to react. Most did by making not a peep. No cheers, no boos, silence.

In the days preceding this scrap, Lara told us that he wasn’t looking past Gausha, but wanted to clear out 154, while Gausha promised to make those dismissing his chances look like fools.

In the first, Gausha was smart, respectful, wary of sharp counters made coming back and ricocheting on him.

In the second, Lara the lefty closed the distance some. His jab often pecked, wasn’t thrown through the target. Gausha was encouraged by fan appreciation when he pressed forward, and flurried. He was still respectful of the Lara hand speed and counter-attack ability.

In the third, Lara pumped a rhythmic range finder jab. He exploded a couple times on Gausha, who skittered away, hands up. In the fourth, Lara and Gausha heard boos, first a smatter then more. Then, bang, down went Gausha. Lara pointed to his bicep. The shot that scored so heavy? A clipping right and a left follow from underneath which added insult.

In the fifth, Gausha tightened up the D and his offense suffered. Boos drifted down at the end of the round.

In the sixth, more boos late in the round. In the seventh, I was surprised so many rooters remained, they were hardcore fans and deserve back-pats. Gausha scored a shot and the remaining masses buzzed. In the eighth, ninth and into the tenth, we saw more of the same. There was more clinching now than before. A bunch of wise guys in section 115 did a countdown, 7, 6, 5, 4,3, 2, 1…to bid adios to the round. In round 11, the wise guys did it again. Same for the end of the 12th. We went to the cards, and many folks didn’t bother to hear the news, they jetted for the exit. It was no classic.