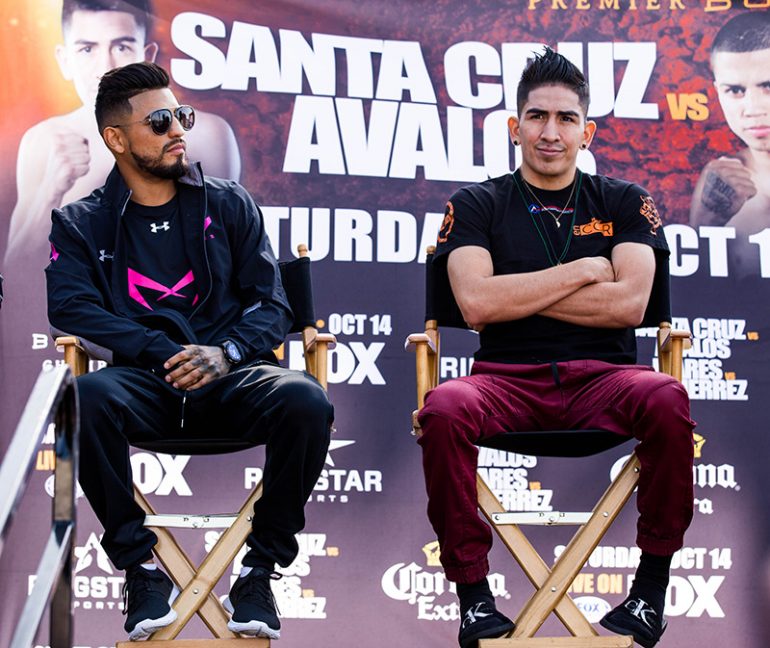 CARSON, Calif. — It wasn’t the fight everyone was hoping to see Leo Santa Cruz and Abner Mares in, but each man looked spectacular all the same.

In dual tune-ups Saturday before a planned March rematch between Santa Cruz and Mares, the 126-pounders took care of business in a PBC on FOX telecast at StubHub Center.

Santa Cruz successfully defended his WBA featherweight title in the main event with an eighth-round stoppage of journeyman Chris Avalos.

And in the co-feature, Mares doled out an absolute beating on Andres Gutierrez over 10 rounds before the bout was halted by referee Jack Reiss due to a grotesque cut over the opponent’s left eye.

The cut was actually caused by a clean right hand — and Mares landed a ton of them — but Reiss ruled that several head clashes and some elbows on the inside further damaged the gash.

“I told everyone that I was here to make a statement,” said Mares (31-2-1, 15 knockouts). ” … I’m a totally different fighter now since I started working with Robert Garcia. We’re going to keep showing that when we fight Leo Santa Cruz.”

Gutierrez was tough and rugged, but he was no match for Mares, who has shown improved boxing ability under the tutelage of Garcia.

Santa Cruz doesn’t believe version 2.0 of Mares will have any more success in the second encounter, though. LSC outpointed Mares in a spirited August 2015 affair at Staples Center.

“He did great, he was moving, but I saw little mistakes I can take advantage of,” said Santa Cruz (34-1-1, 19 KOs), who upended Carl Frampton in a January rematch to regain his title. “Let’s bring on the rematch. He paces himself more, he doesn’t go wild, he doesn’t try to knock you out. More speed and movement.
“I think it’s going to be more easy for me. Fighters that create distance make it more easy.”

Richard Schaefer, who promoted this show under Ringstar Promotions, said he’s already in talks with AEG’s Dan Beckerman to find a suitable date and location. The former Swiss banker’s hope is to place the 126-pound title tilt at Los Angeles’ Staples Center (site of the first meeting) in March, but April is another possibility.

“The next one is going to be another close one, they’re very evenly matched,” Schaefer said. “These are 50-50 action fights. It’s one of the best fights you can make. Abner and Robert Garcia are a match made in boxing heaven.

“Robert Garcia brings out the best in Abner Mares. I think what Robert Garcia has done, he has turned back the clock.”

Mares indeed is a new man. He now boxes on his toes, rather than recklessly plowing forward. He looked excellent in a December victory over Jesus Cuellar, and looked sharp again Saturday.

He measured Gutierrez with damaging right hands from the opening bell, and made mincemeat of the left eye.

“I had a tough opponent and he showed how good he is,” said Mares, 31. “It took a lot of punches and a lot of big punches. It was just a matter of time before I stopped him.”

Mares, of course, was hoping he would be commenting on the result of a second fight with Leo on this night. But he’s not frustrated or angry with the decision by Team Santa Cruz to push the rematch to next year. He understands what Leo was going through, with his father and trainer, Jose, battling cancer.

“He didn’t take this fight for a reason,” Mares said.

But Leo did fight. And he fought well as usual.

He absolutely pummeled Avalos in Round 4 and landed dozens of clean, looping, loaded-up power shots. Avalos, somehow, stood up to the punishment and kept pressing on.

Santa Cruz was a little surprised the fight wasn’t stopped then, but he made sure it wouldn’t last too much longer.

He wobbled Avalos again in the eight with a series of overhand rights and left hooks and scored the stoppage to set up the rematch.

It’s a time-tested strategy in boxing: pair future opponents on the same show against limited opposition to build interest toward the eventual matchup.

Now, it’s time to bring on the rematch.