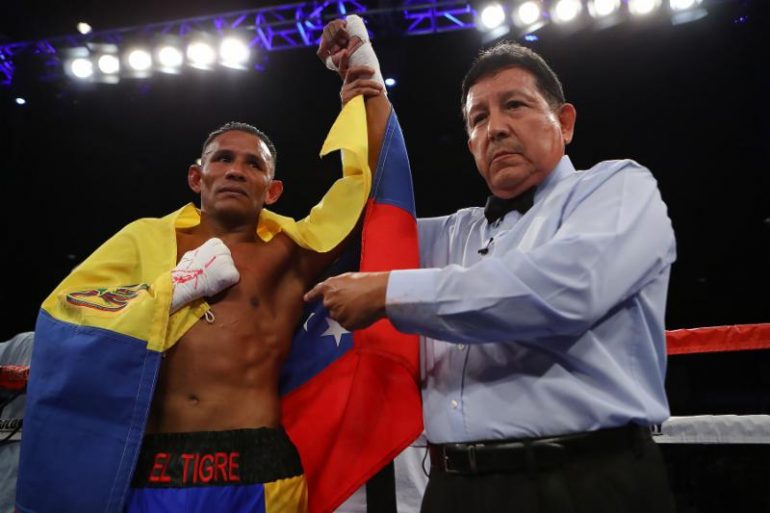 Ismael Barroso can punch with both hands. Fidel Maldonado Jr. can attest to that.

The former lightweight world title challenger made a solid debut at 140 pounds, dominating and eventually knocking out Maldonado Friday night at the Fantasy Springs Resort Casino in Indio, California.

The bout was a clash between hard-hitting southpaws, but it was Barroso who began to take the initiative in Round 2 after a dull opening session.

Maldonado survived but looked like unsteady in the fourth. The Albuquerque, New Mexico, resident grabbed Barroso numerous times during the round, prompting a point deduction from referee Raul Caiz Sr. for holding and hitting on a break.

Cut and on the defensive, Maldonado looked worse for wear. Sensing his opponent was struggling, Barroso pressed the fight in Round 6 and dropped him with a left hand to the body. Caiz Sr. counted Maldonado out at 2:23.

The fight against Maldonado was Barroso’s first in 17 months. Last May, the Venezuelan power-puncher was leading against then-WBA lightweight titleholder Anthony Crolla before being knocked out in seven.

“I knew I was going to win,” said Barroso, who will turn 35 on January 27. “I was feeling very strong going into this fight. We were looking for the body the entire fight. And when we found the opportunity, we landed the shot and ended the fight.”

“I felt fine after the knockdown,” said Maldonado. “(Barroso) had a sneaky left hand, but I recovered well. Then he set me up with the body shot and I just couldn’t get up. I was too hesitant sometimes and it kind of set me up for failure. I have to watch and assess every move and see where to go from there.”

Lopez dropped Cano (30-7-1 1 NC, 21 KOs) with a counter right hand-left hook combination. Cano beat the count but was in no condition to continue, prompting referee Eddie Hernandez to wave the fight over at 2:27.

“I know we had a good fight,” said Lopez afterward. “It’s a big step forward for what’s to come. I want to get better and better every day.”

Francisco A. Salazar has written for RingTV.com.com since October of 2013 and has covered boxing in Southern California and abroad since 2000. Francisco also covers boxing for the Ventura County (Calif.) Star newspaper, Boxingscene.com, and FightNights.com. He can be reached by email at [email protected] or on Twitter at FSalazarBoxing