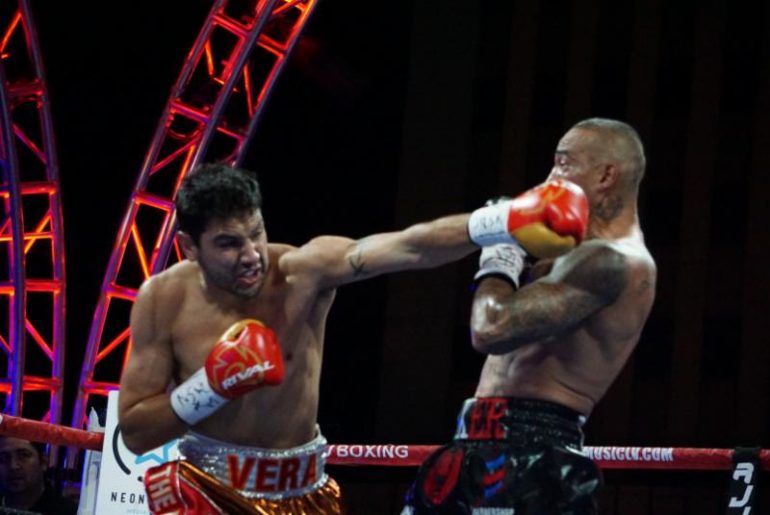 Vera stopped Sunday Ajuwa near the end of Round 3 before a partisan crowd at Gilley’s in Dallas, Texas.

After a feeling-out opening round, the southpaw Vera (18-0, 11 knockouts) found his rhythm. Utilizing his reach and a four-inch height advantage, the home fighter rained punches down on Ajuwa.

With less than a minute left in the second round, a two-punch combination dropped the visitor. Ajuwa, who hails from Nigeria and was making his U.S. debut, fought back, but he was sent down again by a barrage of power punches.

Vera ended matters in the following round, dropping Ajuwa (13-3, 10 KOs) face-first to the canvas with a right hook to the head to the top of the head. Ajuwa beat the count but he was in no condition to continue. The official time of the stoppage was 2:59.

With December 2 the likely date when Puerto Rican legend Miguel Cotto fights for the final time as a professional, Vera was eager to throw his name in the mix of potential opponents.

“I’m half Mexican and half Puerto Rican. I would love the opportunity to face Miguel Cotto,” said Vera, who resides in nearby Fort Worth. “I knew that Ajuwa was a strong fighter, but I had to pick my shots.”

Vera is currently ranked No. 7 by the WBA.

In a battle of featherweights, Gabriel Flores Jr. (4-0, 3 KOs) overwhelmed Donnie Reeves, stopping him in the second round.

Reeves (1-1, 1 KO) never went down, but he was hit repeatedly throughout the fight, prompting referee Neal Young to step in and stop the bout at 1:25.