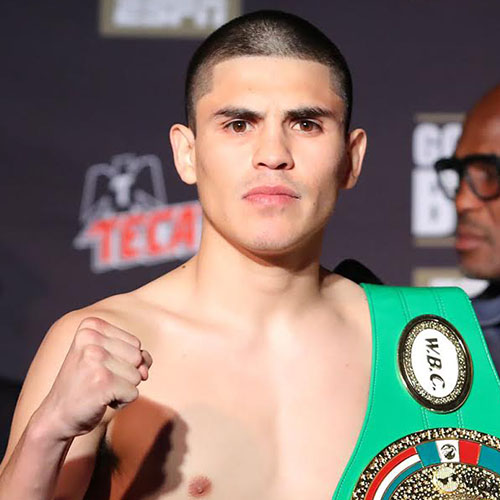 Sure, being the second cousin of Oscar De La Hoya carries its perks. But it also adds a lot of pressure.

Diego wants to create his own name in the ring, and he did a pretty good job of that Saturday in his biggest fight yet.

De La Hoya (20-0, 9 knockouts) consistently beat Randy Caballero to the punch, and cruised to a unanimous decision over 10 rounds in a battle of unbeaten 122-pounders. One judge scored it a shutout, 100-90, with the other two judges turning in the same tally: 98-92. RingTV.com scored it 99-91.

“I trained for this fight, knowing it was going to be a really great battle,” De La Hoya said. “All my sacrifice, I fueled into this fight.”

It figured to be a coin-flip fight heading in, but that prognostication was clearly off when the first round ended. One guy was able to cleanly let loose with fast, accurate punches. The other simply absorbed them and took a step back.

Caballero (24-1, 14 KOs) connected with a picture-perfect triple left hook in the opening round, and continued to batter Caballero’s left eye throughout the duration.

He was able to bust up Caballero with volume – though not power — and the ease with which De La Hoya dispatched him was surprising.

“When we did this fight, we knew it was going to be a great opportunity to put on a good show,” Caballero, a former champion at 118 pounds, said. “Diego is a good kid, and a great fighter and I wish him the best.”

De La Hoya was THE RING’s No. 6 junior featherweight entering the night, but now figures to increase his status in the division. At just 23 years old, the Mexican is clearly ready for a tougher challenger.

And he’s making good on his goal to not just live up to the De La Hoya name, but hopefully be known as his own man.