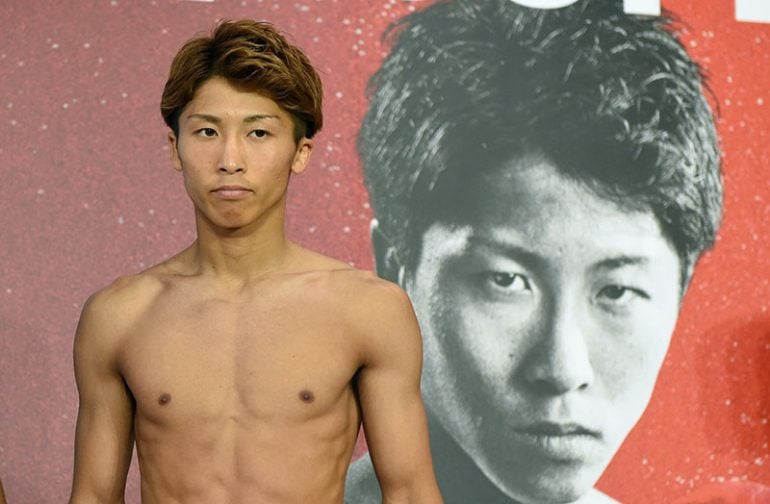 If Naoya Inoue can become a major player on the world-class U.S. boxing scene, a feat no other Japanese boxer has accomplished, the hardcore fans that clamored for his American debut for more than a year have the precocious 115-pound titleholder’s father-trainer to thank.

Inoue (13-0, 11 knockouts), who won world titles in two weight classes by his eighth pro bout, is in position to live up to his ring moniker – “The Monster” – against the best of a very deep and formidable junior bantamweight division. If he eventually does so, proud boxing geeks can start calling Shingo Inoue “Dr. Frankenstein.”

There is no “Monster” without Shingo Inoue and nobody is more aware of this fact than the dutiful son who credits is father as his only boxing hero, his sole inspiration for doing what he does so well in the ring – which is kick ass – and the main man responsible for his impressive accomplishments to date.

Just 24 years old, Inoue is already THE RING’s No. 1-rated junior bantamweight and No. 10 in the magazine’s pound-for-pound rankings. However, if he wins his next fight in impressive fashion, he’ll have the opportunity to climb to the top of the mythical ratings. 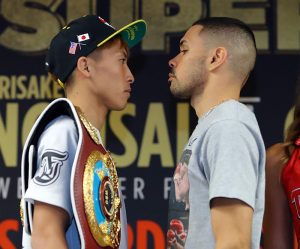 Inoue and Nieves engage in a staredown at the final press conference for “SuperFly.” Photo / Tom Hogan-Hoganphotos-K2 Promotions

The Yokohama-based boxer-puncher makes his anticipated U.S. debut against Antonio Nieves on Saturday at StubHub Center in Carson, California. It’s the opening bout of a stacked HBO tripleheader topped by the Srisaket Sor Rungvisai-Roman Gonzalez rematch and co-headlined by a showdown between two of Mexico’s top fighters, Carlos Cuadras and Juan Estrada. The card, dubbed “SuperFly,” showcases THE RING’s top five junior bantamweights: Inoue, Wisaksil Wangek (AKA Sor Rungvisai), Gonzalez, Cuadras and Estrada. Hardcore fans are already looking forward to Inoue pitting his dynamic boxing style against the winners of the co-main events.

The magnitude of Saturday’s showcase isn’t lost on Inoue, but he wouldn’t look past Nieves (17-1-2, 9 KOs), a 30-year-old former U.S. amateur standout from Cleveland, Ohio, during interviews at a media workout at Legendz Boxing in Norwalk, California, earlier this week.

“My 14th pro fight is one of the most important fights of my career because I want the American fans to want to see more of my fights,” he told RingTV through translator Nobu Ikushima. “I feel the need to come back and fight more in the United States.”

To be welcomed back to the U.S. (and on HBO), he knows he must shine against Nieves, a decided underdog according to fans, media and odds makers, but a solid fighter in eyes of Team Inoue.

“He has a very solid foundation, good fundamental boxing skills,” Inoue said. “I see good one-two combinations and he’s got a long reach, but he’s methodical. I have to get past the reach and breakdown his fundamentals. I want to make an impact, so I will look for the knockout.”

Inoue’s manager, Hideyuki Ohashi, a former two-time strawweight champ, respects Nieves but doesn’t think it will take long for the star of his stable to figure the Ohioan out.

“Nieves has good skill but he’s basic,” Ohashi, who fought hall of famers Ricardo Lopez and Jung-Koo Chang in the late 1980s/early ’90s, told RingTV.com through translator Daisuke Okabe. “He has average speed and power. Naoya is not average. 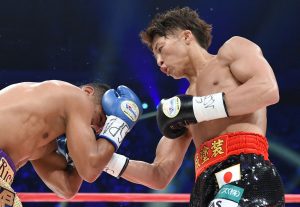 “I’ve been on the business side of boxing for 23 years, but I’ve never managed a fighter as talented as Naoya. He’s levels above the best champions that I’ve trained, managed and promoted.”

Okabe, a young cornerman who is not part of Team Inoue, doesn’t mince words.

“Inoue’s going to get him out of there in two-to-three rounds,” said the understudy to veteran trainer Rudy Hernandez. “The speed, power, timing, control of distance all favors Inoue. I think he’ll smash Nieves.”

If he does it will be a solid introduction to American audiences, but hardcore fans already know who Inoue is.

Before he was “The Monster,” he was an amateur standout with solid international experience. (Inoue compiled a 75-6 record that includes 48 stoppages.) He’s been on a fast track ever since turning pro in October 2012, beating current WBA 108-pound titleholder Ryoichi Taguchi for the Japanese junior flyweight championship in his fourth pro bout. (Taguchi won the WBA belt two bouts removed from his decision loss to Inoue and has defended it six times during a near-three-year reign.) Inoue stopped Adrian Hernandez in 11 rounds to win his first world title (the WBC 108-pound belt) in his sixth bout, then leapfrogged the flyweight division to campaign at 115 pounds after his seventh fight.

In his division debut, he took on long-reigning WBO titleholder Omar Narvaez and blasted THE RING’s No. 1-rated junior bantamweight in two rounds. He’s defended the title five times, and achieved star status in Japan, but yearns for bigger challenges. 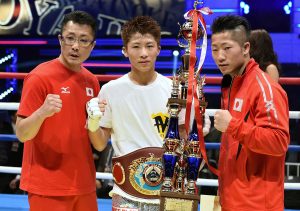 Inoue’s fearless ambition comes as no surprise to those who are familiar with his father. Don’t bother trying to look up Shingo Inoue on BoxRec.com. He only had two amateur bouts, but his passion for boxing was clearly passed on to his sons (Naoya and younger brother Takuma Inoue, THE RING’s 2015 Prospect of the Year).

“Shingo began training in boxing when he was 23 or 24 years old, when Naoya was a baby,” Yuriko Miyata, a staff writer for Japan’s Boxing Magazine, told RingTV.com. “He loved boxing but could never dedicate himself to the sport because of other obligations. His father owned a painting company and he had to help with the family business, so he was a young father who worked full time while he trained in boxing.”

Shingo Inoue eventually gave up on his dreams of boxing, but noticed that 5-year-old Naoya had taken an interest in the sport he was obsessed with.

“He asked Naoya if he wanted to try boxing and Naoya said yes,” Miyata said. “From the very beginning Shingo was very strict on him in the gym. That’s why he trains and hits so hard. It’s always been this way for him.”

Miyata, who has covered boxing in Japan for 20 years, met Inoue when he was an amateur boxer but she says the young man’s talent and potential was evident even then.

“He was still in high school when I first interviewed him and watched him train,” she recalled. “He was a nationally rated amateur who sparred with seasoned professionals. The first time I saw him spar, he sparred with Ryo Akaho, the OPBF super flyweight (115-pound) champion at the time. Naoya was too good for him. Akaho would go on to twice challenge for world titles, but he was outclassed. 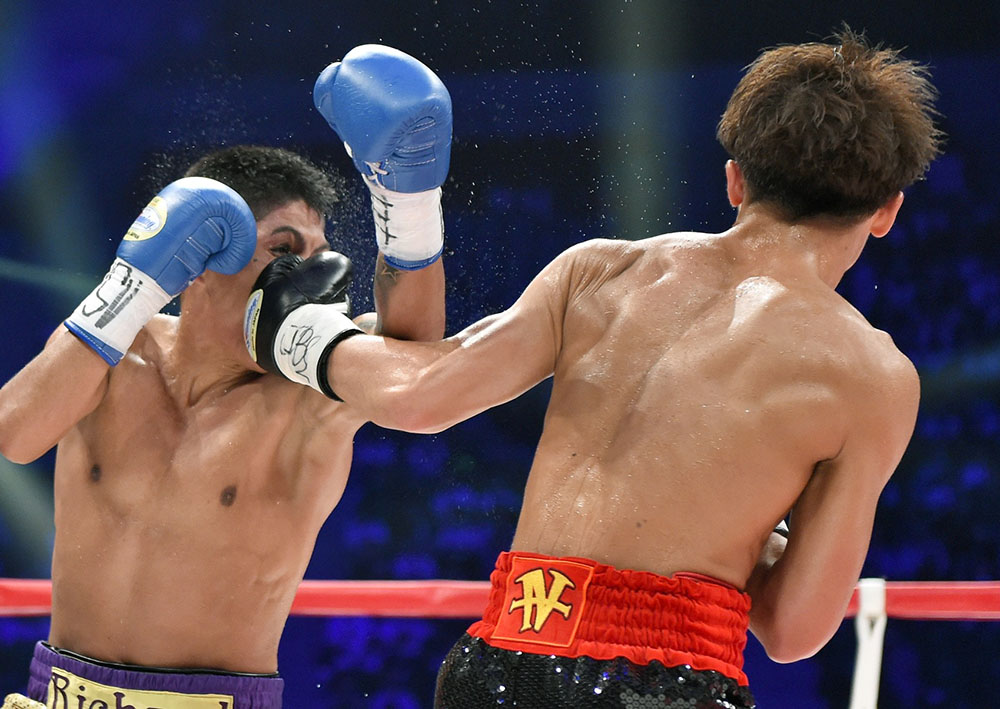 “I spoke to Shingo about what made his son special. I thought it was his control of distance and he told me that is what he always wants from his son. His boxing philosophy is about keeping the opponent in the right spot.”

On Saturday, a significant U.S. audience will witness Inoue put this philosophy into play against Nieves. If successful, Inoue not only continues to fulfill his father’s dreams, but the dreams of countless Japanese boxers – present and past.

“There is more opportunity for Japanese boxers to fight in the United States, and this is a good thing for our young standouts that are watching Naoya,” Ohashi said. “Naoya would have come over last year had he not injured his hand. (Traveling to the U.S.) is something many Japanese fighters want. It’s something I wanted to do when I was a fighter.

“I was told that if I beat ‘Finito’ Lopez there was an offer for me to fight Michael Carbajal in the U.S. Fighting in America was my dream. Unfortunately, I fell short of that dream. Naoya will not fall short of his.”