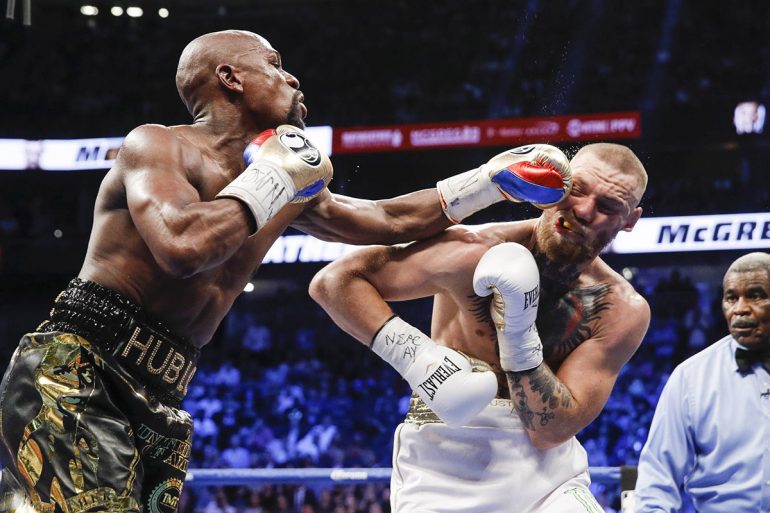 The event came, amid fanfare extraordinaire, excessive, perhaps, to some who scoffed at the mashup of fight game personalities Floyd Mayweather Jr.and Conor McGregor. The hype festival hit 11 for 24/7 and then, finally, mercifully, we saw it play out.

Many came away satisfied, seeing their guy Mayweather show McGregor that you don’t play boxing, that you can’t parachute in and snatch all the glory like it’s a capture-the-flag game. He stopped the UFC lightweight champion in round 10, luring him into deep waters and then draping a concrete life-vest around his waist. The Dubliner gave his peeps much to cheer for and leave their watching parties with heads held high. He did indeed land a few solid shots at one of the greatest defenders of this and any era, and competed at a sky-high level, until his stamina reservoir emptied, and the risk-averse master craftsman decided to bring all the tools out of the box and finish the dismantling.

Days later, debate persists. Some dug it; some didn’t. I wondered, did boxing’s king of all promoters, Las Vegas-based and Brooklyn-born Bob Arum watch the Mayweather-McGregor bout and what did he think?

“Mayweather-McGregor was what you’d expect,” the 85-year-old deal-maker, fresh off announcing specifics of a multiyear TopRank-ESPN deal, told me on the Everlast podcast “TALKBOX.”

“I mean, Floyd carried him for a few rounds and took him out whenever he could,” the Top Rank CEO said. “Look, I know boxing and I know McGregor is a great personality, and he may be a great MMA guy, but he doesn’t know how to box. His stance is all wrong. I have 50 welterweights that I could put in with him and he could pick any of the 50 and he would knock (McGregor) out within 10 rounds. He can’t fight, for Christ’s sake! He doesn’t know how to throw a punch!”

“Yeah, I watched the fight,” said the promoter of Manny Pacquiao.

Was he not entertained?

“Nah, I wasn’t entertained because I knew what was happening. I mean, I know Floyd. Floyd’s job was to play around for a few rounds and then go forward with the guy because Floyd never goes forward. He started landing his punches; the guy had no answer and Floyd knocked him out.”

“You can’t blame Floyd,” Arum continued. “He went in, took the money; he never made any secrets about that it wasn’t a competitive match or that he was to win the fight. If anybody’s to blame, it’s Dana White, and his absurd statements about McGregor knocking (Mayweather) out. McGregor didn’t even land a punch that was anywhere close to Mayweather…It is what it is.”

Muhammad Ali-Jerry Quarry I: Half a century on from the return of the champion

50 years ago, Muhammad Ali launched a comeback unlike any other vs. Jerry Quarry