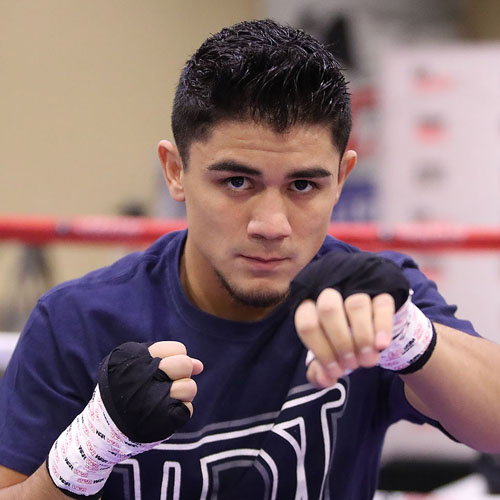 The WBC 126-pound title eliminator between RING-rated fighters will serve as the co-feature to Canelo Alvarez vs. Gennady Golovkin on September 16, it was announced by Golden Boy Promotions on Monday.

A 10-round junior featherweight bout pitting Diego De La Hoya, the cousin of Oscar, against Randy Caballero also is on the card. Lightweight prospect Ryan Martin will open the four-fight HBO pay-per-view telecast against Francisco Rojo.

“I’m facing a guy that has tremendous knockout power,” Diaz, THE RING’s No. 7-rated featherweight, told reporters at L.A. Live on Monday. ” … I personally believe when he fights me, he’s not going to be able to hurt me or faze me because he’s going to be facing a big 126-pounder.

“I don’t think he’s faced a guy as big as me. … I’m going to showcase to everybody that I’m going to be able to take his shots and I’m going to deliver mine, too.”

“JoJo” represented the United States in the 2012 Olympic Games but failed to medal. With his good looks and charismatic personality, Golden Boy could have a star on their hands if Diaz (24-0, 13 knockouts) can claim a title and keep on winning. The bout against Lara is the first step, and it doesn’t figure to be an easy one.

Lara (29-0-2, 21 KOs) possesses a wallop of a punch, highlighted by his first-round knockout of faded former champion Fernando Montiel in April 2016. The Mexican southpaw followed up with a stoppage of Mario Briones, and will enter his toughest challenge to date rated No. 9 by THE RING.

Diaz-Lara is a worthy co-feature fight, one that deserves the attention and exposure Canelo and GGG will bring them. So, too, does the matchup between De La Hoya (19-0, 9 KOs) and Caballero, undefeated 122-pounders.

Neither man has really been tested yet, but that should change with this outing. De La Hoya’s volume punching and aggressive style, while raw, is a lot to handle. Caballero, though, owns a vast edge in experience as a former champion.

“The last name’s always going to be there — De La Hoya — you can’t get away from that,” the Mexican said Monday through a translator. “But this fight is going to prove to everyone what Diego De La Hoya’s about.”

Caballero (24-0, 14 KOs) remains undefeated, but lost his 118-pound title after he missed weight by a mile for scheduled November 2015 defense against Lee Haskins. The Coachella, California, native hopes a victory over De La Hoya will lead him to an opportunity to become a two-division champion next year.

“It was amazing. I’m world champion, everybody’s going to love me, this and that, I walk into Vegas, and I lost my title at the scale,” Caballero said. “Everything was just gone at the blink of an eye, and I witnessed it myself. … It just hurts really bad. But being on a card like this has helped me get my motivation back. I’m eager to come back.

Canelo-GGG is a can’t miss fight, but the undercard figures to deliver plenty of action, too.