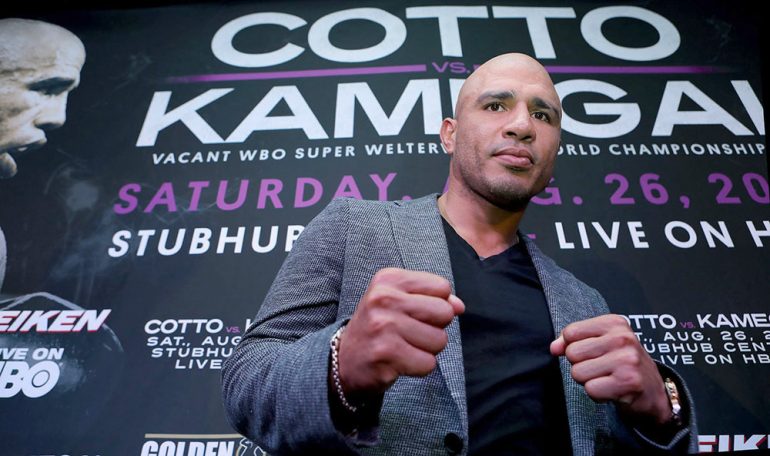 The message was crystal clear.

After 16 years in boxing and titles in four weight classes, there won’t be any more Miguel Cotto in boxing when the clock his midnight on New Year’s Eve in December.

The future hall of famer fights fringe contender Yoshihiro Kamegai on Saturday (9:45 p.m. ET, HBO) for a vacant junior middleweight title. After that, he’s pegged for a December bout, possibly on the second of the month against middleweight contender David Lemieux, in what would be his farewell bout.

And Cotto was steadfast: no matter how good he may look, or what big-money fight may be waiting for him in 2018, he won’t be around to wait and see.

“The decision is already made,” Cotto said. “I’m leaving on December 31 no matter what happens with my career.

” … I think that 16 years is enough, and I have other things to do in my life. You know, I’m taking care of my family better, and that is the biggest and only reason that I have to stop boxing and quit boxing and retire.”

Of course, boxers retire and return all the time. Floyd Mayweather, who fights Conor McGregor on Saturday in a competing bout on Showtime Pay-Per-View, has already announced his retirement three times. Oscar De La Hoya, who will promote Cotto-Kamegai, never returned after losing to Manny Pacquiao, but considered a comeback against Gennady Golovkin in 2015.

Will Cotto be any different, especially with the prospect of a rematch against Canelo Alvarez or a bout vs. GGG? Only time will tell. What De La Hoya is certain about: the quality of his fight vs. Mayweather-McGregor.

“It will be the best boxing match taking place in the country on August 26, mark my words,” he said.

Cotto is widely expected to easily defeat Kamegai in what amounts to a shake-off-the-rust bout, even if it auspiciously is for a vacant title. The Puerto Rican hasn’t competed since a November 2015 defeat to Canelo, though not entirely be design.

The 36 year old was scheduled to return in February against James Kirkland, but the Texan suffered a fractured nose and it was scrapped. Now, Cotto is running out of time to add just two more wins to the ledger of his storied career.

“First of all, I have to just think about Kamegai, and then we are going to do what we always do, you know?” he said. “Then we’re going to pick and choose the best challenger out there, and we are going to face him.

It’s been one helluva ride for Cotto, and it comes to a screeching halt in just a few months. Or so he says.