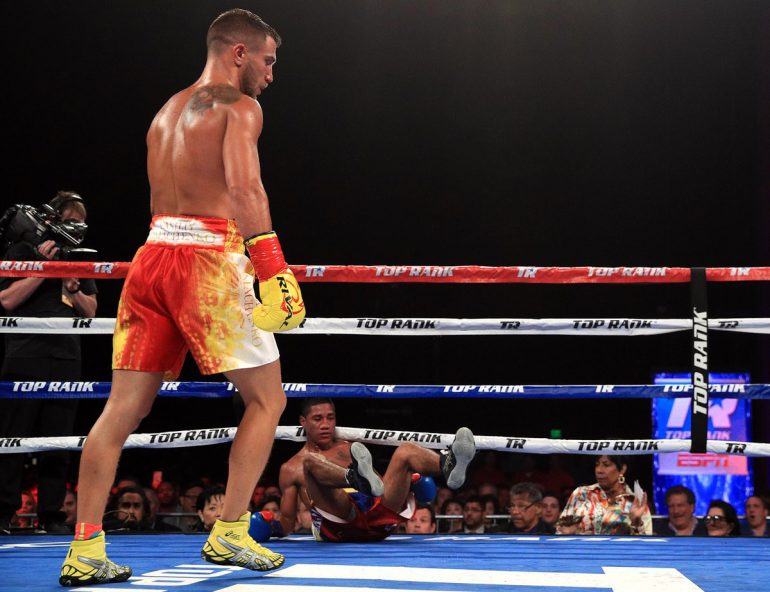 The richly gifted Ukrainian dropped his hands and summoned Marriaga to him on one occasion. He poked his head in and out in a playful way. He gently tapped Marriaga’s head in rapid succession when they got stuck in a clinch. He even did a little dance.

And the 4,000-plus inside the Microsoft Theater laughed. All but Marriaga and those close to him, that is.

Lomachenko toyed with the sadly overmatched Colombian the entire fight, peppering him with all kinds of punches from all kinds of angles and took virtually nothing in return in a fight that couldn’t have been more one-sided.

Marriaga went down from a straight left in the third round. He hit the canvas again in the final seconds of the seventh round, this time from an overhand left to the top of his head.

By the latter knockdown, it was clear to anyone paying attention that this was anything but an actual fight. And, worse, Marriaga was starting to take a beating. Those two factors prompted Marriaga’s corner to end the fight after the seventh round, a wise decision.

That’s why the WBO 130-pound titleholder was unhappy about the selection of Marriaga as his opponent after a potential rematch with Orlando Salido – the only fighter to beat Lomachenko – never materialized. He knew Marriaga wasn’t worthy of the challenge.

His next opponent might not be such a pushover.

Bob Arum, Lomachenko’s promoter, told RingTV.com that he has begun talks with another sublime boxer – Guillermo Rigondeaux – for a possible showdown in December.

Arum said the Cuban junior featherweight, who has chased a big fight for years, is willing to jump two weight classes to junior lightweight to face Lomachenko in what would be a fascinating matchup.

An agreement doesn’t appear to be imminent but both sides seem enthusiastic about the fight, which is encouraging to those who would like to see it.

God knows Rigondeaux needs a defining fight and some big money. He’s 36 and his career has been slipping away. And the public shouldn’t be subjected to another matchup like Lomachenko-Marriaga.