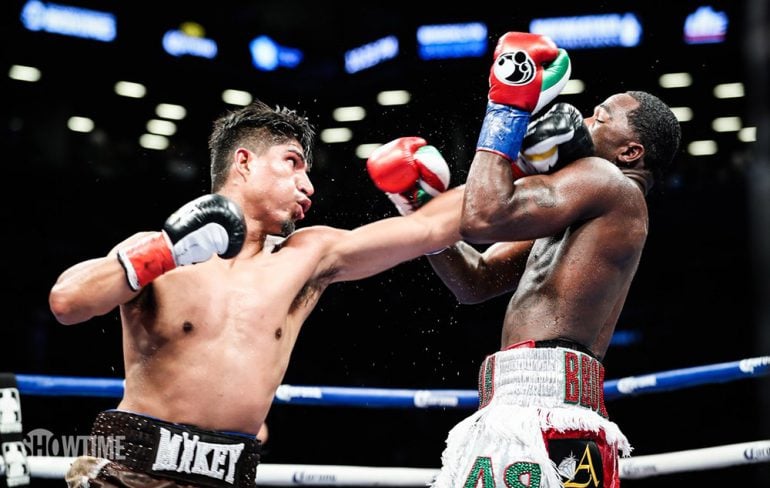 NEW YORK — Mikey Garcia is who we thought he was. So, too, is Adrien Broner.

The fight played out in a familiar pattern round after round: Broner yet again refused to throw punches in a high-profile fight, shades of his 2015 one-sided loss to Shawn Porter.

No, Broner preferred to dance, talk trash and shake his head no as Garcia delivered precise combination after combination in a one-sided rout that turned out to be the mismatch oddsmakers — and many media members — predicted. But surely no one thought it would be this uncompetitive.

Garcia, though, proved yet again that despite a two-and-a-half year layoff amid a legal battle with Top Rank, he’s a man who must be accounted for in any discussion about the sport’s elite talents.

“This is definitely one of my best performances ever,” said Garcia (37-0, 30 knockouts), who also owns victories over Orlando Salido and Roman Martinez. “I think I controlled the fight in the early rounds and I kept the activity up. [Broner] is a great fighter who has great skills. I was the superior fighter tonight.

“It was the timing, I’ve always said I have very good timing. It is underestimated when you are outside the ring but once you get inside the ring with me, I’m a step ahead.”

And there’s no doubt about it: Garcia was a step ahead all night long. He stepped into the pocket and fired accurate combinations over and over again.

Every punch the 29-year-old flung had a particular purpose, and was thrown with such incredible precision. No energy was needlessly expended as Garcia let loose with picture-esque one-twos — short, straight shots from in close that forced Broner into a defensive shell, afraid to engage for fear of what would land in return.

Broner, in yet another moment of delusion in a long line of such experiences, delivered a curious line.

“It was Tom & Jerry, I had to catch the mouse,” said Broner, 28, who was stalked by Garcia round after round. “If I fight tomorrow, everybody in this motherf—– still gonna come see me. At the end of the day I’m still A.B., I’m still ‘About Billions,’ I’m still the ‘Can Man,’ I’m still a fighting motherf—– and anybody still can get it.”

What exactly Broner can do at this point is clear. He can compete and beat B-level fighters — like he did Adrian Granados in their February outing. He can’t hang with A-level types like Porter, Garcia and Marcos Maidana, who too was trained by Robert Garcia, Mikey’s older brother.

Broner (33-3, 24 KOs) always had tremendous hype surrounding him, but it was just that — hype.

Garcia, however, appears to be the real deal, and with his professed willingness to fight anywhere between 135 pounds and 147 to facilitate matchups with the most high-profile opponents, he’ll find himself in the public consciousness for quite a long time.

Really, he appears to be just getting started. The layoff apparently didn’t harm Garcia at all, other than cost him a few seven-figure paydays. Instead, he was able to avoid some wear-and-tear, and looks sharper than ever.

He scored a knockout of the year candidate over Dejan Zlaticanin in January, and six months later, he now has a win over the most-accomplished opponent of his career and on his biggest stage yet.

Unfortunately, Garcia’s victory over Broner was a ho-hum affair from start to finish. Broner’s unwillingness to step into punching range and refusal to throw more than one punch at a time made it so.

The crowd of 12,084 was sleepy but woke up in Round 3 when Garcia connected on a powerful left hook. Broner, naturally, shook his head, as if to say no, but didn’t respond in fighting manner.

When Broner dispensed with his jab, it effectively upset Garcia’s rhythm, but then Broner would inexplicably stop, and resorted to ducking and dodging under Garcia’s combos.

Garcia picked Broner apart patiently, and then, in Round 6, he finally truly let his hands go and landed at will. Only then did Broner begin to counter, but he was overwhelmed by the volume.

The angsty crowd pleaded with Broner to begin punching to no avail, and when Mikey began to fire his shots in Round 8, everyone began chanting his first name in unison.

Broner began to open up a bit more in the final few rounds, but it was too little, too late. The result was a foregone conclusion.

It’s also too little, too late for Broner to reignite his career as a top-level fighter.

He’ll surely receive another opportunity based on nothing but name recognition, but no one will be fooled again into thinking Broner is one of the sport’s elite talents, no matter if he’s in shape or not (Broner avoided a $500,000 fine by making weight Friday.)

But there’s someone who doesn’t have to fool anyone. He talks with his fists. And that’s Mikey Garcia, who is understated in and out of the ring, but is ready to grab the brass ring as one of boxing’s best. 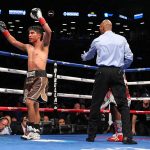