Mike Stafford on Adrien Broner: ‘We never lost to a Mexican’ 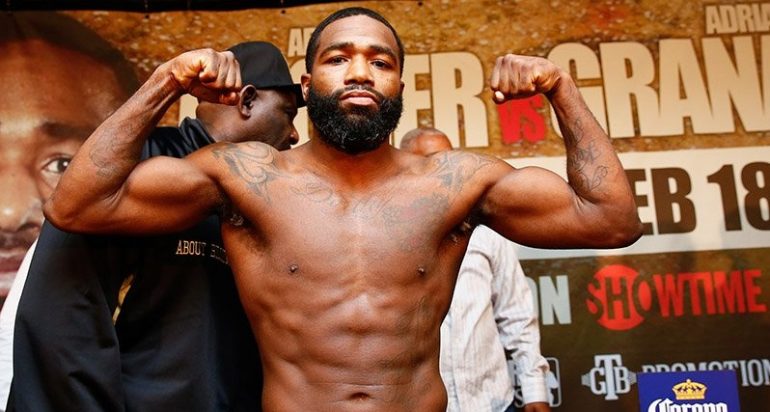 Like any smart soul, the people in the Adrien Broner camp are deciding, they say, to use disses and discredits as fuel to motivate.

There is no shortage of kindling, of course…

Team Broner sees what you say on social media, that Mikey Garcia is going to drop and stop him, that Mikey has a better skill set and is the hungrier dude.

“AB” doesn’t agree that Mikey is all that, plus a bag of chips…

Trainer Mike Stafford checked in from camp in Colorado, as sparring mate Gabe Bracero chattered in the background and his main man, he said, is walking around right now in the mid-140s.

“We are counting the days down,” said Cincinnati Stafford. “We are feeling real good.”

His voice featured a relaxed tone, one that reflects, perhaps, his level of pleasure at how hard his talented but mercurial charge has been working.

“The negativity we see, from some the reporters, the stuff on Facebook, the so-called experts saying Mikey is a a better boxer, more focused, more skillful…that’s a bunch a bull,” Stafford said.

People, he said, are too fixated on “the bad rap, the stuff AB went through a year or two years ago. But we use it as motivating. It always motivates him. That’s why he’s a four-time world champion. He’s the underdog. He’d been the underdog, since he came into my gym, and was taking on my national champions. He had over 350 amateur fights, won national championships and everyone doubts him. Why? Partly because he expresses himself in a different way than most. He’s a fireplug. Most champions are.”

OK, but yeah, Broner sure does express himself in a distinct style. And, frankly, it beefs up his pay grade. So many tune in to see the braggy boxer lose. Same with Floyd Mayweather Jr.…Extra zeroes go to the people many love to hate. That’s the upside but it can be hard to swim through a sea of trash-talking aimed your way. Yes, even Broner has feelings, much as his blustering and bragging and such indicates otherwise.

Stafford has been hearing some chatter, stuff along the lines of: Mikey is going to stop AB. “OK, this is the good guy versus the bad guy,” said Stafford. “It would be one thing if AB had ever been knocked out. It would be different if we didn’t have no knockouts. People bring up the past, the (Shawn) Porter fight. He was an overweight welterweight and we woulda knocked him out with one more round. They bring up (Marcos) Maidana; one more round and we would have knocked him out.”

Stafford said AB has wrecked a few sparring partners and they went home after a day or two. The high altitude has served him and his lungs well, he said. Maybe, I noted, an extra stamina burst could mean we won’t hear, “If he had one more round…” Maybe he has an extra measure of zest this time out…

The trainer acknowledged this could be so…

He also took aim at Mikey’s trainer and brother Robert Garcia. “They talk about Maidana and Robert. Robert was lucky. Maidana was from Argentina and he came to his gym. I trained AB since he was seven. He had a bad night against Maidana and almost knocked him out. Then, Maidana lost twice and retired and didn’t give us another shot…And we’ve been hearing Mikey is showing in camp how great things are going. And then people doubt that camp is great for Broner. They doubt it. Why does that have to be B.S.?”

It will all be proven, one way or another, come July 29 at Barclays Center in Brooklyn, and on Showtime. Broner would be getting an XL win over a guy a lot of people are thinking and hoping elevates to Top 5 star status this year.

Stafford is more than mildly puzzled why people are drooling over Garcia in this one. “At 140, we never lost. We never lost to a Mexican. Why they think a Mexican gonna KO Adrien? We’re winning…We’ve been winning. All the hard work he’s been doing will be proven. All the road work…the stamina, the ability to adjust. He’s doing everything in camp. Turning his hips. Countering. So many weapons…and he’s using all that! Adrien can fight from both sides. He was a southpaw originally. He has so many weapons. Anything coming at us, we can handle. No, I don’t train him like Floyd Mayweather, don’t train like Senior or Roger. When Mikey has someone slipping, rolling with shots, countering, throwing stiff jabs, Adrien got all that. He make adjustments and go for the kill. Adrien is a smart boxer; his ring IQ is very high!”

Stafford gets it, basically, why Garcia gets the adoration and his guy doesn’t as much, “Mikey is a lovable kid but Adrien is also lovable! Any reporter that thinks otherwise, you see him out, and kids come up to him, love to take pictures. Mexican kids!”

There is a week left of sparring and Stafford said weight is totally on track. He’s already mid-140s today, the tutor said. “I just wanna finish and say, ‘Tune in; it will be a great fight. You got experts saying this and that. Robert Garcia is so famous; he’s talking and people are listening to him more than his brother. He’s not in the ring. He’s talking too damn much!”

All the social media chatter, the Instagramming and all that, it will be rendered moot shortly enough. In less than two weeks, Broner would get arguably his career-best win and doubters will be eating a “Told ya so” sandwich, courtesy of the braggy boxer. Or Garcia lives up to that billing from suits and such who think he is a rare gem, one to build around. There won’t be five more anticipated boxing matches booked this year.

All the social media chatter, the Instagramming and all that, will NEVER be rendered moot when it comes to Michael Woods. Because you’ll have to pry that smart phone from his cold, dead hands!!