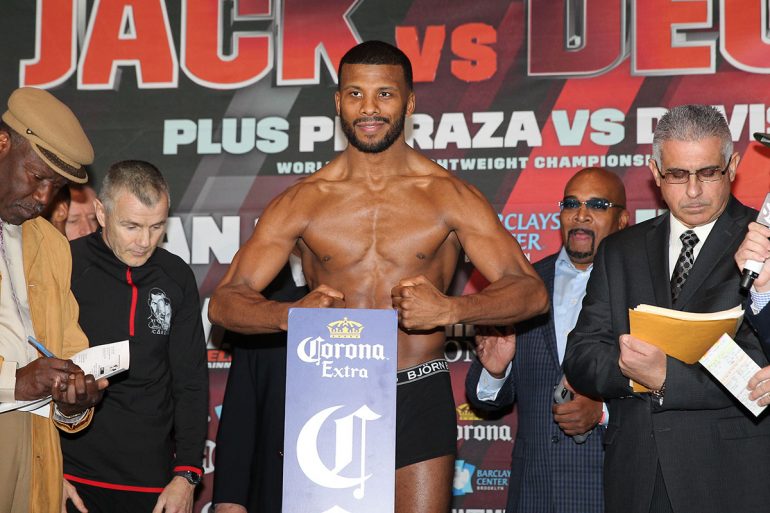 The former super middleweight champion has been in talks for weeks ahead of a possible light heavyweight showdown against Nathan Cleverly and it was finalized Thursday as part of the Floyd Mayweather Jr.-Conor McGregor undercard on August 26 in Las Vegas.

The other two televised undercard fights on the pay-per-view telecast: Gervonta “Tank” Davis against Francisco Fonseca and Andrew Tabiti vs. Steve Cunningham. Jack, like Davis and Tabiti, fights under the Mayweather Promotions banner.

“I’m thankful for this opportunity and I’m excited about getting another shot at a world title,” said Jack, who will challenge for Cleverly’s “regular” WBA title, which THE RING doesn’t recognize. (Andre Ward holds the WBA’s true title at light heavyweight, as well as THE RING belt.) “To be a part of this event and fighting on this card is historic. Nothing beats it. I’m excited to get back in the ring. I’m getting ready to take that belt, and win a title in my second weight class.

“The biggest difference between past training camps and preparing for this fight is the fact that I was training to get the weight down, now I’m training to build muscle and perfect my boxing strategy. This will be a tough fight, but I don’t see any issues getting through it. I feel confident and fans can expect a win by knockout or decision. He’s not leaving with that belt. It’s staying right here in Las Vegas.”

Jack (21-1-2, 12 knockouts) vacated his 168-pound title following a January draw with James DeGale. The Swede had been sapping himself to make weight, but already feels great as he cuts into shape for his return to 175. The 33-year-old fought at light heavyweight early in his career, but made a name for himself as a super middleweight.

Cleverly (30-3, 16 KOs) made five defenses of his light heavyweight belt before Sergey Kovalev knocked him out in 2013. The Welshman then moved up to cruiserweight and eventually dropped a split decision to Tony Bellew, before settling back at 175 pounds.

He dropped a decision to Andrzej Fonfara in a fight of the year candidate but bounced back with a victory over Juergen Braehmer last year. Cleverly figures to have far more trouble with Jack, an athletic puncher.

“This is a fight I have wanted ever since Badou Jack moved to light heavyweight and I’m delighted to fight in Vegas on an event like this,” said Cleverly. “I’ve trained long and hard for this fight and I’m ready to be let off the leash. This is the biggest fight of my career so far and I’m going to do a number on Badou Jack on August 26.”