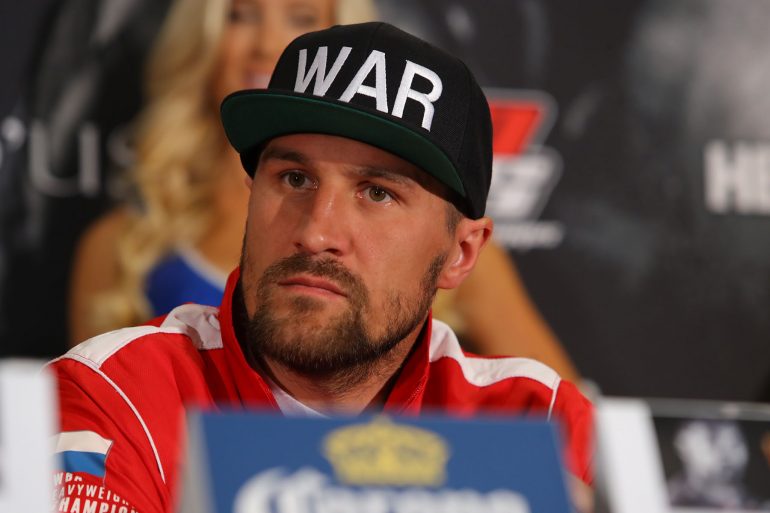 No doubt, he’s agitated about the massive disparity in his purse, compared to Andre Ward’s following a razor-thin first meeting.

The Russian is definitely pissed off at the media, whom, in his mind, twist his words into soundbites and headlines.

So he did something about it.

When it was time for Kovalev to speak with select media prior to the final news conference ahead of Saturday’s rematch, he decided he’d rather not.

Kovalev appeared at the actual presser on time but after he said his piece, he quickly jettisoned the media center, much to the chagrin of RocNation Sports executive Michael Yormark and the rest of Team Ward.

“I already said enough and I will prove it June 17 in the ring,” Kovalev said while wearing a black “WAR” ball cap in a nod to Marvelous Marvin Hagler. “You (pointing at Ward) get prepared.”

Ward shot back, “Don’t point your finger at me.”

It’s funny he should say that. The HBO show titled “Face Off with Max Kellerman” is what raised tensions in the first place.

The 15-minute segment, in which fighters trade barbs in an intimate setting, was scheduled for May 7, the afternoon following Canelo Alvarez’s dismantling of Julio Cesar Chavez Jr.

The way Yormark told it to RingTV.com, Ward was delayed three hours for his scheduled flight from Oakland to Las Vegas for his appearance on the Canelo-Chavez pay-per-view telecast. Ward was unsure if he should even go but Yormark explained how vital the Latino audience was to the promotion for the Ward-Kovalev rematch.

Ward made it and was interviewed by HBO’s Jim Lampley shortly before the fighters touched them up for the opening bell. Kovalev was noticeably absent from the interview. 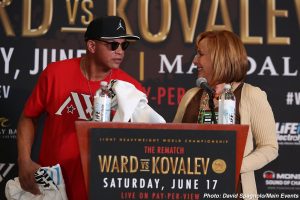 Around 5 p.m. PT that night, Yormark says Main Events CEO Kathy Duva, Kovalev’s promoter, informed him that her fighter wouldn’t be present. Kovalev was tired after training, Duva said, according to Yormark.

Would Kovalev even make it to the scheduled taping for “Face Off” the next day, Yormark wondered. Ward was equally curious, so Yormark told Ward to leave Sin City instead of waiting around.

In Yormark’s mind, why should Ward miss a day of training on the chance Kovalev didn’t appear?

Sure enough, Kovalev was present on time for the HBO show but, with Ward now M.I.A., the segment was canceled, a staple of every HBO Pay-Per-View and, with it, $50,000 down the drain for production costs.

Duva and her daughter Nicole dispute that version of the events. They said Main Events never promised that Kovalev would appear on HBO, only that he might but that he would certainly be at the “Face Off” taping.

Yormark expressed that it was “no problem at all,” according to Nicole, a key decision-maker with Main Events, and said to “disregard an accusatory email sent by one of his employees and he hugged each of us before leaving. Kathy assured him Sergey would be at the ‘Face Off’ and he gave absolutely no indication at all that he was concerned.”

Kathy says she would have told Yormark sooner that Kovalev was indeed not going to make it to Vegas in time but they don’t have the executive’s personal cell phone contact, only the number of his assistant.

The flames were truly stoked now if matters weren’t heated enough between both camps. There was the controversial nature of the first bout, with fan and media sentiment favoring Kovalev, but all three judges scored the bout for Ward.

Then, Ward publicly toyed with the idea of retirement rather than the mandated rematch, which put Kovalev on ice for a while.

Outrage is often feigned in boxing to build interest in a fight. There’s little buzz for this one but make no mistake: these two men – these two camps – hate each other.

“He seems to forget that we’re only responding to the outrageous and outlandish comments that he’s made throughout this promotion,” Yormark said, referring to comments from Kovalev about punishing Ward, since he can’t get in the ring with Yormark himself. “He was the one that made those comments, not us. We haven’t initiated. We responded.”

Kovalev’s tweet that included a faux conversation with Ward including racial overtones was the icing on the cake. Kovalev snapped when questioned about charges that he’s a racist, on Tuesday, and called Team Ward “rude motherf**kers.”

The 34-year-old said there won’t be a third fight because he’s not doing business with them again. The feeling seems to be mutual.

“I’m not quite sure if we wanna do a trilogy either. We probably both have the same opinion of each other. Andre is going to win the fight and there’s going to be no need for a third fight after Andre wins twice. Andre will have an opportunity to move on to whatever fight he wants to,” said Yormark.

The controversy even extends to the trainers.

Ward and his trainer Virgil Hunter claim Kovalev coach John David Jackson attempted to jump ship to their side. Jackson says Ward and Company contacted him.

Before the presser came to a close on Thursday, Kathy Duva grabbed a white towel with “Life Water” written on it, one of Ward’s many sponsors, and asked, “Is this what you’re going to throw into the ring on Saturday?”

Hunter quickly replied, “If I need to,” and added “(Kovalev is) twisted; you know that, right?”

Kathy didn’t disagree. Kovalev is angry, she admitted, and he’s going to take it out on Ward.

“The first fight, (Kovalev) did so much (to promote it),” said Egis Klimas, Kovalev’s manager. “He flew the country back and forth. On this, he doesn’t feel like Ward is doing enough to promote. Ward has a sugar daddy (music mogul Jay Z) who pays him $7 million for this fight. OK? Sergey is earning every single penny. He is promoting this fight as much as he can.

“Every single penny comes from the fans – from the ticket sales, from the pay-per-view – Sergey is earning. Nobody’s giving it to him.”

The talk is over – almost — and, on Saturday night, Kovalev will have to work even harder to earn a victory because nobody is giving that to him either.

* Yormark, in an interview with RingTV.com, shot down speculation that this bout is the last of Ward’s deal with RocNation Sports. “He signed a mutliyear agreement and we’re nowhere near the end of that contract.”

* Yormark also said RocNation Sports, despite operating without a matchmaker following Eric Bottjer’s departure, is as committed to boxing as ever. Miguel Cotto left the company last month after just two fights but Yormark pointed to Guillermo Rigondeaux, who fights Moises Flores on the undercard Saturday, and middleweight contender Luis Arias, who opens the telecast, as pillars of the stable led by Ward.

* The Wednesday announcement that Floyd Mayweather Jr. will meet UFC lightweight champion Conor McGregor in a mega-event on August 26 really put a damper on the promotion for Ward-Kovalev II. Organizers lost key scheduled media appearances and it’s likely that PPV sales will suffer as a result. Duva even implored the media to keep pumping out coverage of the fight on Thursday.