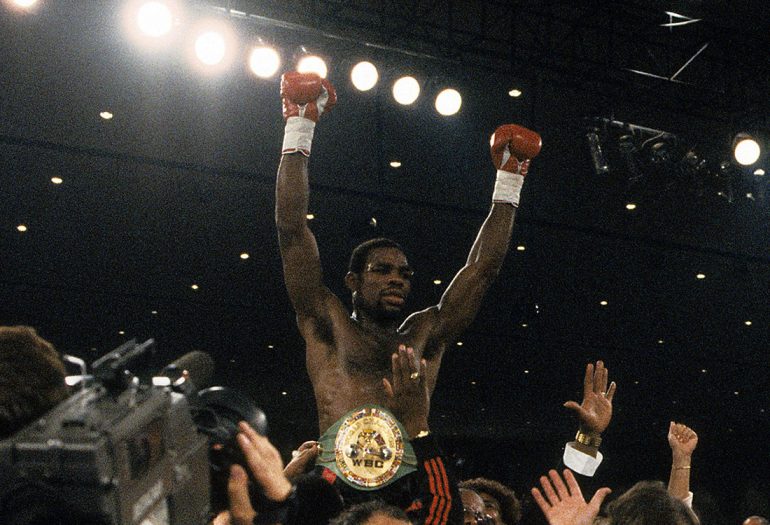 Photo from The Ring archive
12
Jun
by Anson Wainwright

Iran Barkley, an all-action fighter who made his name as a middleweight when the 160-pound division was particularly deep, lit up boxing during the 1980s and early ’90s. He wasn’t consistent — being just as likely to lose a fight he was favored to win as he was capable of upsetting the biggest stars in the sport — but he was always fun to watch. All told, the likeable New Yorker won world titles in three weight classes in an exciting career.

Barkley’s early years were particularly tough. He was born and raised in the notorious Patterson Projects in South Bronx, the youngest of eight children. Despite the hardships he has fond memories of his youth.

“It was tough. I had to battle with gangs, I was a former gang member in the Black Spades,” Barkley told RingTV.com. “We protected our neighborhood, we ran it in the ’70s, it’s not like it is now, the buildings run down, gangs were coming into the neighborhood, we were beating them up and kicking them out of there.”

Many in his family boxed but it was his sister – a female boxer – who first introduced him to the sport when he was 14 years old. 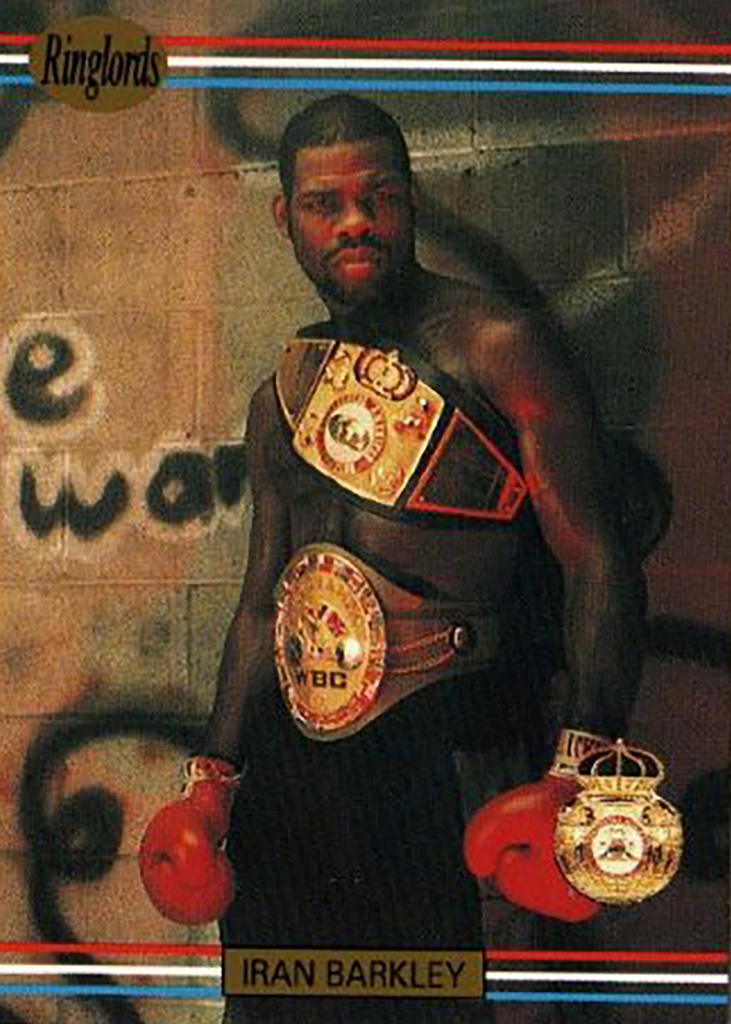 “The Blade” enjoyed a successful amateur career. He was the runner up to his best friend Dennis Milton at the New York Golden Gloves in 1981, the same year he won the Empire State Games. In 1982, he won silver at the United States amateur championships and bronze at the Copenhagen Box Cup. He also won bronze at the World Championships in Munich, Germany.

He was on the Olympic squad and had hopes of making the 1984 team. However, fate had other ideas.

“I didn’t want to wait the two years because my first daughter was born,” he explained, “and I had to figure out how to raise her and get money instead of robbing and stealing.

“I said, ‘I’ve got to figure out how to do this.’ I chose the boxing world and gave up the gang business. I was still cool with my gang. They supported me.”

Barkley exited the amateur system with a very respectable record of 95-4 (26 knockouts).

He turned pro in late ’82, and after winning his first four bouts the heavy-handed bruiser dropped a decision to Osley Silas, though he later avenged it. In early ’84, Barkley was stopped when he faced Marvin Hagler’s half brother Robbie Sims.

Barkley continued to progress and although he lost once more his career was clearly on the way up. He was one of the more popular fighters at the Felt Forum in his home city. He beat well respected Wilford Scypion in late ’85. The following year he stayed active, notably beating world-rated James Kinchen by 10-round split decision.

When Marvin Hagler was stripped of the IBF and WBA middleweight titles for facing an inactive Sugar Ray Leonard, Barkley was selected to face Sumbu Kalambay for one of the fractured titles. The two met in one of the final 15-round fights in Kalambay’s adopted Italy. Despite a sterling effort Barkley, he lost a spirited decision to the skilled but underrated African.

The two met in Las Vegas in the summer of 1988. Barkley entered as a 4-1 underdog and while expected to make for an entertaining fight most believed Hearns would win handily. It looked that way for two-and-a-half rounds, as Hearns speared Barkley with sharp, thudding shots to the head and body, busting up the New Yorker and cutting him badly over both eyes. 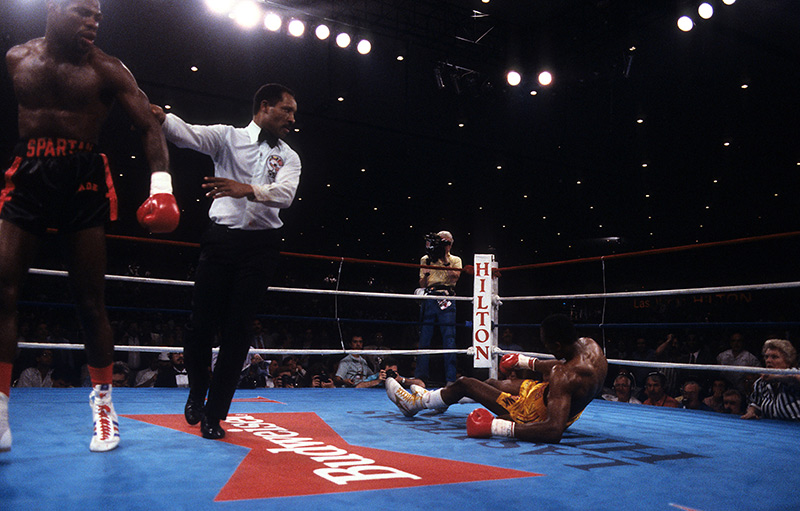 It was doubtful referee Richard Steele and the ringside doctor would have let the fight continue into the fourth round. However, Barkley never stopped believing and is nothing if not resilient. He dug down deep within himself and with 45 seconds left in the round Barkley threw a Hail Mary right hand that landed perfectly, dropping boxing royalty flat on his back. Hearns made it to his feet but had nothing left and a follow up flurry dropped him through the ropes. It was one of the most unlikely wins of not just the ’80s but many other decades.

Eight-months later, Barkley met another ring legend: Roberto Duran. Barkley was hoping to avenge the loss of his friend Davey Moore who Duran had beaten previously. On this night Barkley wasn’t able to turn back the super-human effort put forth by the smaller, older man, who wouldn’t be denied.

Barkley learned just how special Duran was and famously afterwards said, “It was his heart… it just wouldn’t go.”

Looking back now he feels it wasn’t meant to be and it was simply Duran’s night. The fight was awarded THE RING magazine’s Fight of the Year award for 1989.

His name was such that he was able to fight Michael Nunn and Nigel Benn in middleweight title fights. However, by this time he was struggling badly to make 160 pounds and lost both bouts. 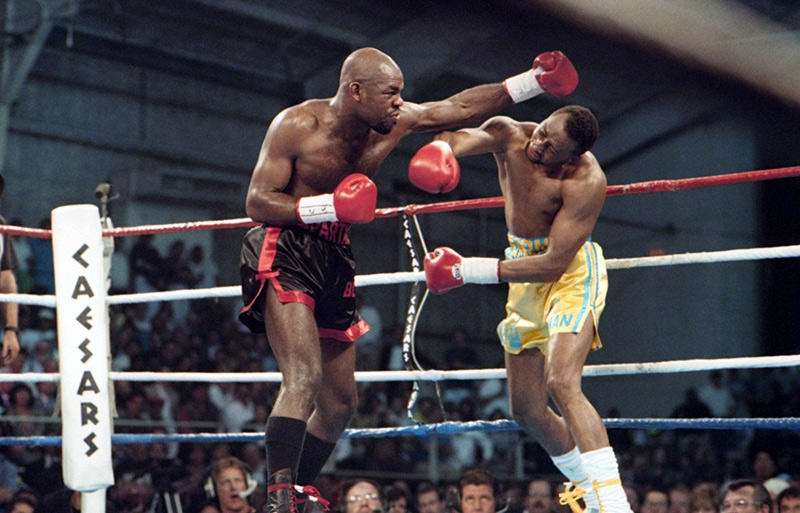 Barkley worked his way back up at super middleweight where he demolished Darrin Van Horn in two brisk rounds to win the IBF 168-pound title. Just two-months later, Barkley met Hearns in a rematch this time at light heavyweight where they contested The Hitman’s WBA strap. Barkley still had Hearns’ number in terms of style, as his pressure and slugging produced another early round knockdown, but the Detroit legend got up and fought the New Yorker tooth and nail to the final bell. Barkley won a split decision and become an unlikely three-weight champion. Both wins helped him win the THE RING’s ‘Comeback of the Year’ award for 1992.

He made the decision to drop back to super middleweight where he was stopped by then up-and-coming James Toney in nine rounds. The following year he had one final world title fight, when he traveled to Germany and lost to Henry Maske. By this time Barkley was clearly on his way down.

“Henry Maske was a guy who caught me when I was a light heavyweight that came down from 240 pounds to fight him,” he said. “When I made weight I was dry. Henry was an alright boxer but he wasn’t a strong guy. It got away from me that day.”

Like many others before him and since, Barkley stuck around too long. By the mid-’90s, his prime was in the rear view mirror, but he continued to fight up at heavyweight for much of the rest of the decade.

“Boxing was my life,” he said passionately. “I didn’t know what else to do after that. You’re lost until you find yourself.”

Despite the numerous late-career losses, Barkley, who retired with a record of 43-19-1 (27 knockouts), is largely pleased with his boxing achievements. 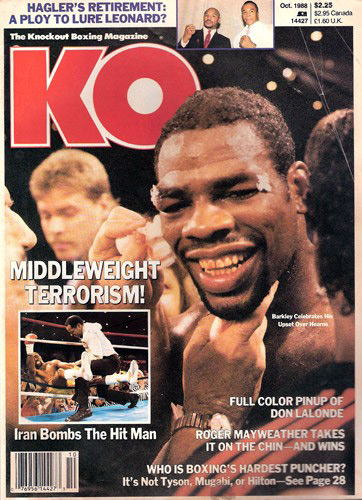 “I feel I achieved everything I could have achieved,” he said. “Except saving the money and just moving on.

“I think I fought everybody they could have thrown at me, except John ‘The Beast’ Mugabi, Marvin Hagler, those would have been good fights. If I’d beat Duran maybe Ray Leonard would have had to fight me and maybe I’d be getting the millions they were getting. I was making comfortable money.”

While he enjoyed many highs and several lows, he finds it difficult to pin down a particular proudest moment.

For several years life was tough for Barkley, however, due to the kindness of his friends he has been able to put his life back in order.

Barkley, now 57, is married and has four daughters from a previous relationship. He also has four grandchildren. He still lives in the Bronx and has been doing the celebrity tour, meeting and greeting, signing autographs, all of which keeps him actively involved in boxing. He says there is an autobiography being written on him called “It was never meant for me to win.”

Roberto Duran: Wow, in my pro career, you know who I would have to say? Duran. Duran had a jab that if he hits you with it, he knew how to throw punches off of it. He set everything up off that jab. Another fighter I always thought was perfect doing that was was James ‘The Heat’ Kinchen.

James Toney: He used to protect himself and roll. I really had to figure him out. He wasn’t a big puncher but that roll was frustrating.

Thomas Hearns: Tommy had fast hands. Being tall and lanky like he was, his hands were pretty quick. Tommy had a bigger punch with everything he threw. Michael Nunn’s punches, I didn’t really feel. He was quick but I didn’t feel his punches. He wasn’t quicker than Tommy.

James Kinchen: As a matter of fact, James Kinchen and another guy I that didn’t get too much recognition I fought early in my career, Mike Tinley, (had fast feet). Kinchen, he was little and he had fast little feet.

Duran: Duran was a good catcher. I spun Duran around with a left hook one time. It was amazing. I said, “This guy took a shot that would have knocked a building down.” [Laughs]. James Kinchen. I hit 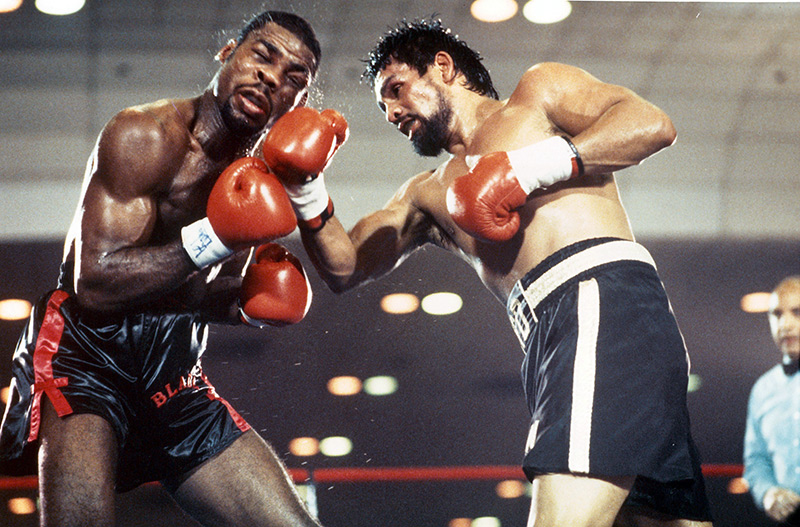 him with good shots, he would always come back, even though I was a big puncher and knocked him down a couple of times, he just came back. Toney took a good shot but he was crafty with his rolls.

Duran: He knew just how to get out of things. No matter how hard I hit him he would always come back and figure something out, someway how to survive. Toney had a good Ring IQ.

Duran: [Laughs] Duran was the guy. He was a little guy but no matter what I hit him with he would roll and come back. He was still able to push me a little. 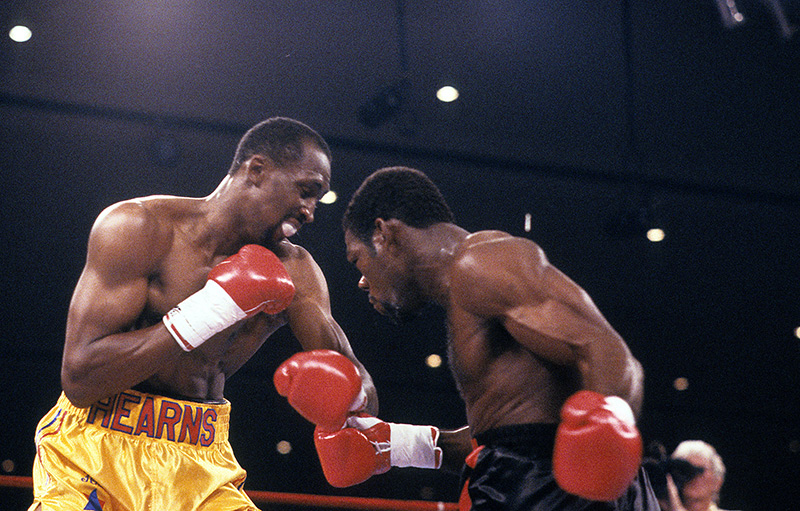 Hearns: His power’s unbelievable. He was a lot stronger than I thought he was for a slim guy. Nigel [Benn] didn’t have any power to me. I felt a lot of punches but Nigel’s power to me, I didn’t really feel his power. That evening [against Benn], with me I couldn’t make [middleweight] weight anymore, I was steamed out but he did his job that he had to do. I fought guys who hit way harder than him.

Duran: His skills were sharp. He was a crafty guy. He’ll roll back and punch, he’d catch you off balance if he could. He was a smart, crafty man.

Hearns: Because of his punching power and his skills, his ability to jab, move and be that tall to be able to box.