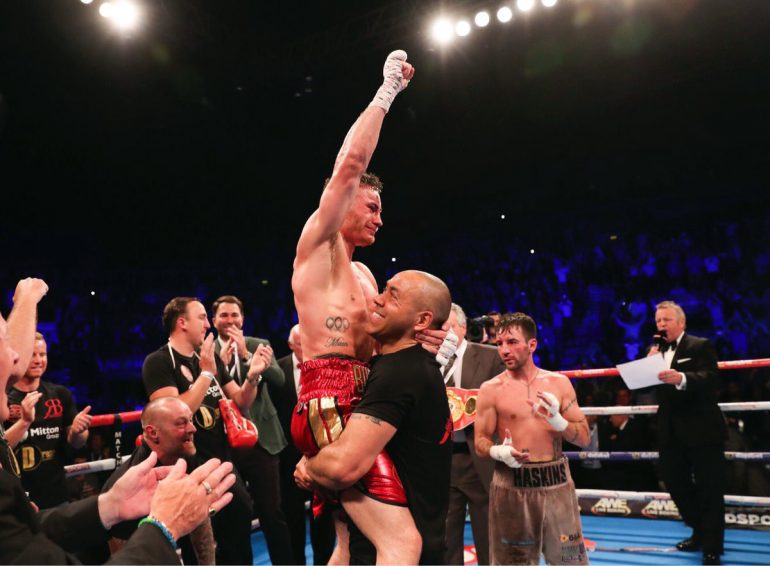 There was a train of thought that it was too early for Ryan Burnett. Put that to bed.

The unbeaten 25-year-old scored a 12-round split decision over the vastly more experienced Lee Haskins to claim the IBF bantamweight title in front of a raucous home support at the Odyssey Arena in Belfast, Northern Ireland, on Saturday.

Official scores were 119-107 twice for Burnett, and a preposterous 118-108 in favor of Haskins. Don’t let the result detract from the facts, however, as the score in favor of Haskins is literally the most ludicrous tally that this reporter has ever seen. Unless American judge Clark Sammartino has made a bizarre error of some sort, he should never work again. And that is no exaggeration. 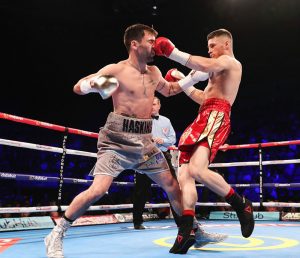 “The title is staying in Belfast,” roared Burnett in his post-fight interview with Sky Sports in the U.K. “Haskins is a serious competitor. He hurt me a couple of times but I tried to hide it. I’m world champion and I strongly believe that the best man won on the night.”

The challenger was sharp early. He offered plenty of feints to draw leads from Haskins, which he then countered to good effect on more than one occasion. The right hand landed well, although Haskins, who has seen it all before, worked adeptly out of the southpaw stance and landed some nice left hands to the body.

As is always the danger when orthodox meets southpaw, there was a terrible clash of heads when the fighters threw their backhands simultaneously in Round 2. Blood instantly appeared around the eyes of both men, although Burnett got the worst of it. However, it was still the challenger landing the cleaner blows.

Haskins, known for having an awkward style, was struggling to time the Belfast man. Burnett’s feints, head movement, footwork and broken rhythm were a nightmare to time and that sharp right lead continued to pierce the guard.

Head clashes remained a problem throughout and it is indeed difficult to recall a world title fight with so many of them. The style confrontation was solely responsible for this and there was no intentional butting whatsoever.

In the sixth, Haskins missed with a right hook and backed away from an exchange, shaking his right arm. Distracted, he quickly found himself against the ropes and Burnett scored with a withering overhand right to score the first knockdown. The visitor signaled to his corner that his right arm was bothering him and conveyed the same information in his team between rounds.

As one would expect, Haskins’ punch output began to drop and he was being tagged more frequently as a result. Burnett was a lot sharper, a lot more energetic and he wore the look of a man who would not be denied.

Despite the punishment intensifying in the championship rounds, Haskins was determined to stay the course. He had sporadic success but was mostly beaten to the punch by Burnett who snapped his head back with a huge right in the 10th.

A swift right lead, left hook combination decked Haskins again in the 11th and he was very close to be being stopped. Only bravery and championship grit got him through his 38th professional contest and the gusty Englishman deserved to hear the final bell.

Burnett was stepping up more than one level tonight. The former British champion had everything his own way in his first 16 outings but hadn’t mixed with anything resembling Haskins, who is a decorated and established professional. Burnett passed this test with flying colors.

Haskins (34-4, 14 KOs) is 33 years old and it will be difficult to bounce back at top level. In an interview with RingTV.com last week, the crafty left-hander sounded extremely content with how his career had panned out and you can’t blame him. A former two-time British, Commonwealth and European champion, and now a former world titleholder. It’s been a wonderful journey for the Bristol man.

Moments after the fight British Boxing Board of Control secretary Robert Smith addressed the scorecard that created so much outrage. “I just couldn’t believe it,” he said. “I haven’t had time to speak to the (Clark Sammartino) which I will do later. The judge in question will not be working in this U.K. again and I will be making the IBF aware of that.”

Both fighters weighed in officially at 117 pounds.