Stevenson-Fonfara: Everything you need to know 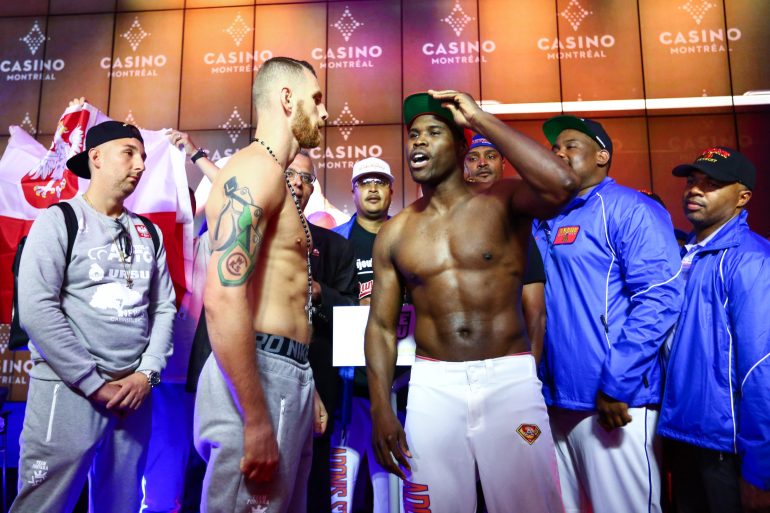 When Adonis Stevenson and Andrzej Fonfara met in 2014, the Polish fringe contender shocked the public by pushing the then-RING light heavyweight champion to the brink.

Fonfara applied tons of pressure in an action brawl and even knocked the Canadian down in Round 9. That was after Stevenson scored two knockdowns himself (in Rounds 1 and 5). Fonfara’s impressive late finish begged for a rematch, and three years later, it’s finally here Saturday at the Bell Centre in Montreal (9 p.m. ET, Showtime).

A lot changed in that time.

Stevenson was stripped of the RING title due the quality of his opposition. The much-anticipated clash with Sergey Kovalev never materialized and instead, “Superman” scored decisive victories over a quarter of middling foes: Tommy Karpency, Sakio Bika, Thomas “Top Dog” Williams and Dmitry Sukhotskiy.

Fonfara, on the other hand, scored a career-best victory with a stoppage of Julio Cesar Chavez Jr. in yet another Showtime main event. Fonfara followed up with a thrilling victory over Nathan Cleverly, but then all the momentum came to screeching a halt when Joe Smith Jr. knocked him out in only one round.

The 29-year-old rebounded in March with a knockout of Chad Dawson (the man Stevenson grabbed the title from with a first-round KO), though Dawson is now badly faded and even gave Fonfara fits at times.

Stevenson is now 39, but will time be enough to chip away at his punching power and give Fonfara the chance at both revenge and the upset?

Stevenson ranges from a 10-1 to favorite to odds placing him at more than 12-1 to make his the eighth consecutive successful defense of his WBC 175-pound title.

Can Fonfara carry over his success from the finish of the first fight?

Will Fonfara improve in his second outing with Virgil Hunter?

Can Stevenson score the KO this time, which would be his biggest victory since the highlight-reel knockout of Dawson to the win the title in 2013?

How much does Stevenson have left at age 39?

Will Eleider Alvarez take care of faded former champion Jean Pascal in the TV co-feature and become a viable challenger to Stevenson in the future?

“I’m ready because I know Fonfara is dangerous. We’re not underestimating him. I’ve prepared for everything, everything he brings in the ring I’ll be ready for it.

“I’m training for the knockout. Emanuel Steward always told me ‘knockouts sell.’ When I get in the ring I’m going for a knockout. It’s not an option for me to go 12 rounds.”

“I know Andrzej Fonfara from 12 rounds in the ring. He can’t change his style right now. He may show some improved defense, but after a couple of rounds it will be the old Fonfara.”

“I’m a much smarter fighter now. Mentally, I’m much stronger and smarter. I bettered myself. Virgil (Hunter) has taught me a lot of new stuff. Some things worked in my last fight with Chad Dawson, some things didn’t. But that was our first fight together. Now I’m ready to show everything in this fight.”

“I can’t make the same mistakes I did in our first fight. I must fight much smarter.”

“Stevenson only has a good left hand. He’s the champ and he’s a good fighter, but his boxing isn’t amazing. He’s not easy, but he only has basic boxing skills. We must cut his left hand and be ready to throw my right. We need to control him.”

“I’m ready to take the title. My time has come. I respect him because he’s the champ. I came here to show that, this time, I’m the better fighter.”

Stevenson might be older, but he’s still the sharper, better fighter, and he carries the equalizer with his massive left hand. Fonfara might test him again, but it says here Stevenson stops him this go around.