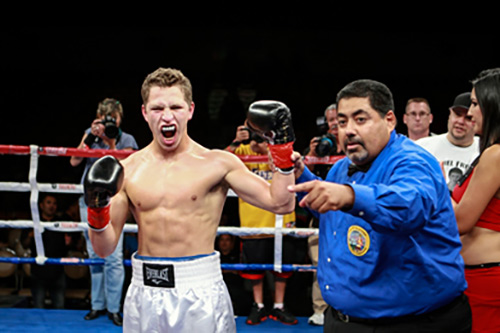 Franco-Haro replaces the original main event between unbeaten junior welterweight Maurice Hooker and hard-hitting Abdiel Ramirez, which was scrapped when Hooker had to withdraw from the fight earlier this week due to an injury.

“I honestly felt Haro versus Franco was a legitimate main event fight as the co-feature,” said promoter John Andersen. “Injuries are an unfortunate part of boxing and we’re disappointed to lose a world-class fighter like Hooker. Haro-Franco gets top billing and we’re fortunate to have a solid co-feature to a very competitive, entertaining card.”

Franco (16-1-3, with 11 knockouts) suffered his first defeat as a pro on March 23, losing by knockout in Round 3 at the hands of Christopher Martin in Los Angeles. In his last bout, on May 12, Franco, who resides in Riverside, California, knocked out over-matched Francisco Suarez in Round 1.

Haro (13-1-1, with 7 KOs), who resides in the Salt Lake City suburb of West Jordan, has not fought since since stopping Sergio Najera on July 16. He is unbeaten in his last six bouts since losing to Toka Kahn Clary.

A few weeks after winning a one-sided decision over Juan Reyes in September 2015, Haro was sidelined for several weeks after being shot twice, once on each foot. After surgery and weeks of recovery and therapy, Haro returned to the ring six months later.

Opening the CBS Sports Network telecast will be a six-round junior lightweight between Giovanni Mioletti (7-0, with 1 KO) and Salvador Lopez (4-1).

The fight card will be a co-promotion between Knockout Night Boxing and Roc Nation.