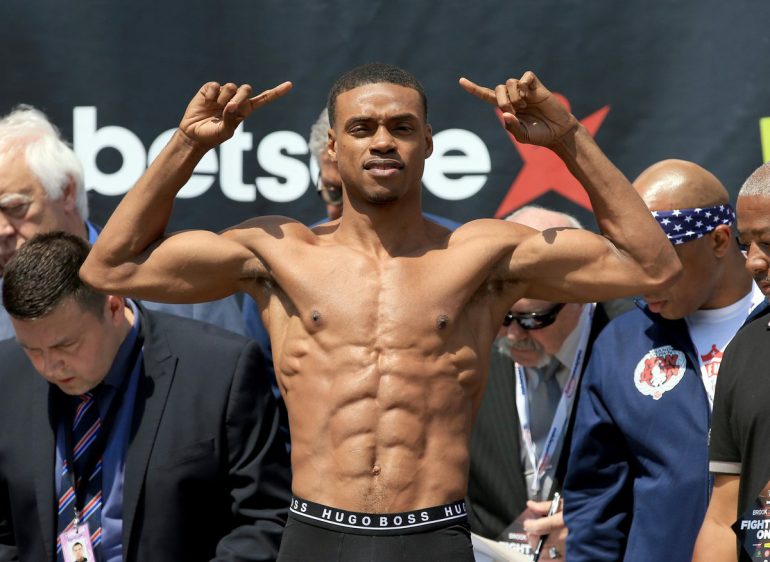 26
May
by Mike Coppinger

Errol Spence Jr. possesses all the ingredients to become the next American boxing star; that much is clear.

Time is on his side. After all, he’s just 27 years old. He’s supremely confident of his vast abilities — a trait he says comes from hard work — and he should be. Spence isn’t the type to yell from the mountaintop about how great he is, though. His self belief is expressed in a more quiet manner.

All has gone swimmingly for the Texan thus far, but on Saturday, we’ll find out what he’s really composed of. That’s because Spence is jumping all the way from fights against gatekeepers and the like to elite level with an assignment against IBF welterweight titleholder Kell Brook (THE RING’s No. 2 at 147 pounds).

Spence (21-0, 18 knockouts) will be tasked with not just learning how to deal with a champion on the fly, but if he’s going to win his first world title, Spence must complete the job on hostile ground before thousands of screaming, singing loyal Brits at the outdoor Bramall Lane Football Ground in Sheffield (5:15 p.m. ET, Showtime).

“I feel like this is a legacy-defining fight for me,” Spence, THE RING’s No. 7-rated welterweight, said on a recent conference call. “Most guys with my pedigree get the title handed to them in some type of way. They don’t go across seas to fight the hometown guy against a good fighter like Kell Brook. That’s really unheard of. So I definitely think I get a lot of credit for going overseas and fighting Kell Brook.

“This is an ideal situation. I would be disappointed if I was fighting someone else because he vacated. I’m a real fighter, I want to fight the best, I want to fight the champion and earn it the right way. I can’t wait to prove I am one of the best fighters in the welterweight division.

In a sport filled with bloviation, Spence is right: It truly is unheard of to see a former Olympian earn his first title shot in this manner. But that’s just how great Spence’s advisor, Al Haymon, and the boxing public at large feel Spence can be. No challenge seems too large at the moment.

You never truly know until you see a fighter mix it up with someone on the top level. And to this date, Spence has feasted on far lesser opponents, though it’s looked easy each time out. His blend of power, speed, balance and all-around fundamentals have carried him to wins inside the distance last year over tough veterans like Chris Algieri and Leonard Bundu.

Spence is also one of the strongest welterweights out there. Ask anyone who has sparred with “The Truth” and they’ll tell you: Spence is hulking on the inside. He’ll need that strength against Brook, another big 147-pounder who moved up to 160 to face Gennady Golovkin in his last outing.

Brook (36-1, 25 KOs) was eventually stopped by GGG after suffering a fractured orbital bone, but the “Special One” stood in the pocket and traded with a much larger man, proof his punch resistance is top-notch. Brook possesses a big advantage in experience (he won his title with a decision over Shawn Porter on American soil), but Spence believes he can overcome it all.

“You just have to have that ‘it’ factor, and I think I have it,” said Spence, who represented the U.S. in the 2012 Olympic Games in London. “I’m not worried about the crowd, I’m not worried about the boos or anything like that. I can’t let the fans get to me. … I love all boxing fans, and they don’t know yet, but at the end of the night they are going to be rooting for me. They’ll be my fans.”

For a period, it seemed unlikely Spence would have his opportunity at a Rocky-Drago moment at all. Asking a fighter to drop 13 pounds in actual competition weight is a tall order. A cautionary tale: Roy Jones Jr. climbed up to heavyweight for a title fight against John Ruiz, and immediately after faced Antonio Tarver at 175.

The all-time great looked sluggish en route to a majority decision victory over Tarver, and then was knocked cold in the second round of the rematch.

Sure, Brook walks around at a heavy weight, but after moving up to 160 pounds for the Triple G bout, promoter Eddie Hearn wanted his man to settle in at 154 pounds.

Brook, 31, refused, saying he worked too hard to simply vacate the belt. And besides, he’d heard all the naysayers claiming he didn’t want to face a tough challenge like Spence. So weight games be damned, it was on.

“I wasn’t surprised. Kell Brook’s a real fighter that wants to fight the best,” said Spence, who arrived in England two weeks in advance to combat jet lag. “A lot of people said he would be ducking me … I kind of knew he was coming down. I wanted him to come down because I wanted to take the belt from the champion. I didn’t want to fight the next available guy. I wanted to fight the champion, the guy who has the belt and earn it the right way.”

And if Spence is going to ascend to his place as one of boxing’s best pound-for-pound fighters, he’ll likely have no other choice but to earn it the right way. He’ll no doubt receive no favors from the three judges, nor referee Howard Foster. It simply comes with the territory of fighting overseas.

If Spence is going to begin his ascent up the ladder to an eventual spot as America’s top boxing star, the quest will begin tomorrow, nearly 5,000 miles away, far from the comfort of Desoto, Texas.

“This is a lifelong dream of mine, something I have been dreaming about as a little kid,” he said. “I’ve given my blood, sweat and tears to get here. This is my time, this is my era, and I will be a world champion Saturday night. I wouldn’t have come here if I had any doubts.”

Americans looking for the next great boxing star to call their own hope this isn’t a case of too much, too soon.