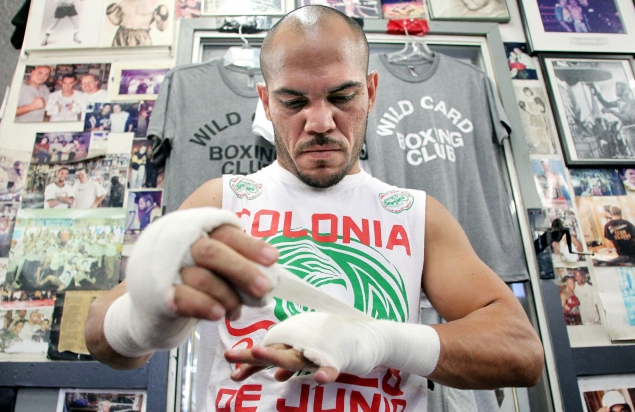 20
May
by Mike Coppinger

NEW YORK — The thud of Jonathan Maicelo’s head colliding with the canvas produced a sickening sound and a concussive ending to what was a spirited affair.

Maicelo, with massive support from the large contingent of Peruvians from nearby North Jersey, had knocked Raymundo Beltran down in Round 1 and had his foe eating a volley of shots in the second, when suddenly — swiftly — the fight was over.

Beltran struck his foe, gaining confidence by the second, with a picture-perfect counter left hook that ended matters at 1:25 of Round 2. Maicelo (25-3, 12 knockouts) rolled slightly in agony while on his back, his right forearm at his forehead as he stared up at the Madison Square Garden lights, and referee David Fields halted the HBO-televised contest immediately without a count.

The stretcher was quickly rolled out by medical personnel, and Maicelo was transported to Bellevue Hospital for observation.

Beltran was told by immigration lawyers that he badly needed a victory to strengthen his case for a green card, or risk deportation to Mexico.

The law states that an athlete must possess special skills in order to obtain one, and with a win in the IBF lightweight title eliminator, Beltran is in line to face the winner of the Robert Easter-Denis Shafikov contest set for June 30.

That’s now two consecutive statement victories by Beltran, who knocked out Mason Menard on HBO in December, and you can add Beltran-Maicelo to a growing list of Knockout of the Year candidates headlined by David Lemieux-Curtis Stevens and Mikey Garcia-Dejan Zlaticanin.

Maicelo was coming off an impressive victory over Jose Felix, where the Peruvian scored five knockdowns. But it’s Beltran, who started his career slow and was better known for being Manny Pacquiao’s chief sparring partner, who appears to still be improving at age 35.

Beltran has had two cracks at the title — a lopsided loss to Terence Crawford and a controversial decision defeat to Ricky Burns — but just maybe, the third time’s the charm.