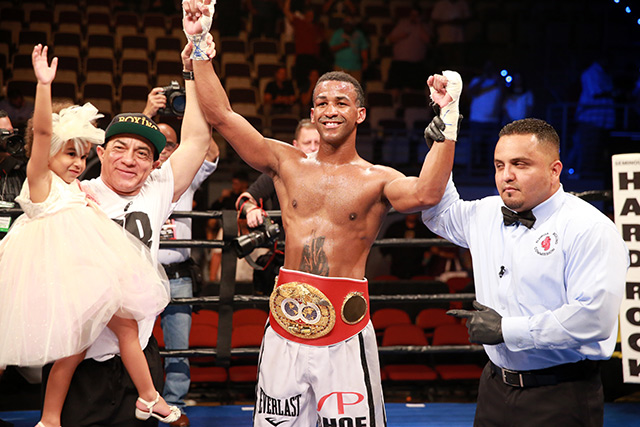 20
May
by Brian Harty

The fight got off to a fast start with Relikh whipping hooks upstairs while Barthelemy chose body shots between his stiff jabs. Round 3 was a painful one for Relikh as he caught a head-butt and then a low blow that dropped him to all fours, but he accomplished some good work with his higher volume of power punches.

That trend continued into the fifth, when Relikh scored with an overhand right that landed behind Barthelemy’s ear and triggered a knockdown after the ropes held him up. Barthelemy was fortunate the round was nearly over at that point, as Relikh’s follow-up attack had the Cuban on the verge of defeat.

By Round 8 Barthelemy (26-0, 13 KOs) had largely abandoned any hands-at-his-sides cockiness in favor of earmuffs, but Relikh continued to chop the taller fighter down with body shots. Just before the bell, though, Relikh (21-2, 19 KOs) was dropped by a bodyshot from Barthelemy. Another series of bodyshots hurt Relikh in Round 11.

The two switch-hitters finished Round 12 with no further drama and Relikh may have been fading, but the overall impression was that the less athletically talented but dogged fighter swayed the result in his favor or, if anything, that the eighth-round knockdown would be the decider.