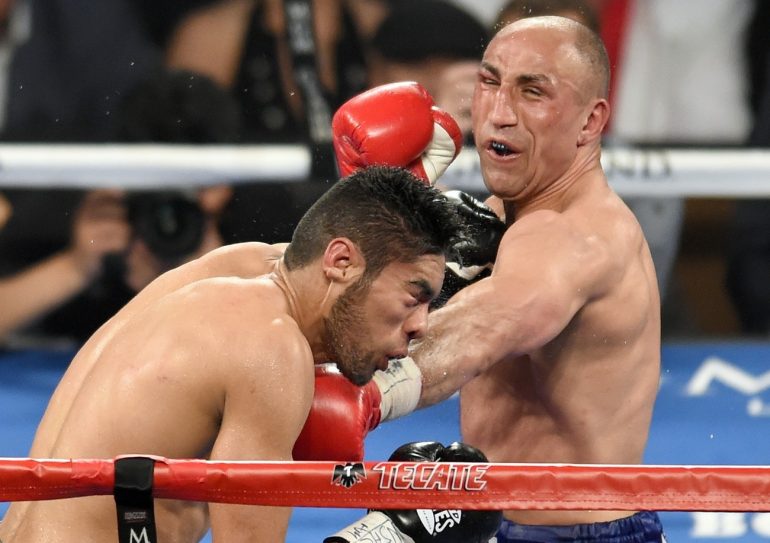 Just when it seems Arthur Abraham could be close to hanging up his gloves, the 37-year-old finds himself in position to fight for another world title belt.

In a world title elimination bout, Abraham outboxed Robin Krasniqi to win a hard-fought 12 round unanimous decision Saturday night at the Messehalle in Erfurt, Germany.

Over a year ago, Abraham lost the WBO super middleweight title in a one-sided bout to unbeaten Gilberto Ramirez (who also fought Saturday night) in Las Vegas. Abraham, who is ranked No. 2 by the WBO, bounced back from the loss to Ramirez on July 16 with an eighth round knockout win over Tim Robin Lihaug.

Krasniqi, who challenged for a world light heavyweight title twice before dropping down to 168 pounds, entered the Abraham fight having won his two previous bouts.

It was all Abraham during the first half of the fight. Abraham mostly worked from the center of the ring, beating Krasniqi to the punch. Abraham momentarily staggered Krasniqi midway through round five, but the Kosovo-born fighter was able to survive Abraham’s onslaught.

Sensing he was down on the scorecards, Krasniqi let his hands go more from the eighth round on. Krasniqi worked threw more two and three-punch combinations, but Abraham effectively countered with his own combinations, landing consistently with right hands to the head.

Both fighters fought in spurts during the final two rounds, likely from exhaustion, but there was little doubt Abraham would be the one who would have his arm raised in victory.

Scores were 118-110, 117-111, and 115-114 for Abraham, who earned a world title opportunity with the win. Unbeaten Jesse Hart is the mandatory challenger to face WBO super middleweight titleholder Gilberto Ramirez, who will likely follow up with the WBO to enforce his mandatory shot against Ramirez.

Welterweight prospect Mohammed Rabii (2-0, with 1 KO), who represented Morocco in the 2016 Olympic Games in Rio de Janeiro, won a six round unanimous decision over Jean Pierre Habimana (6-9-3, with 2 KOs).