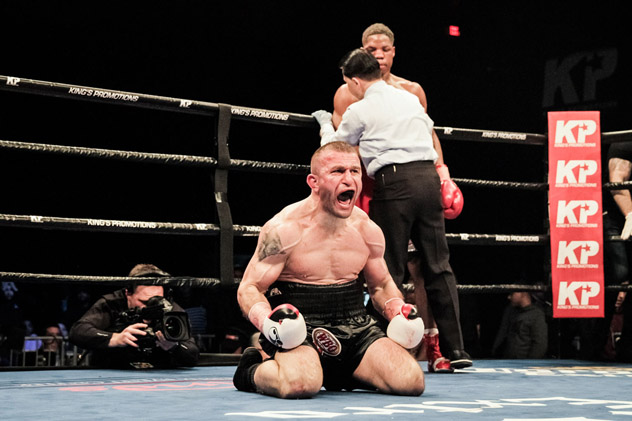 Avtandil Khurtsidze’s approach to his interim WBO middleweight title bout with Tommy Langford tonight in England is simple: He needs to win by a knockout or he knows he likely won’t get a decision in Langford’s backward, says the boxer’s advisor Keith Connolly.

“I think he has to win by knockout to assure that he doesn’t get robbed over there in England,” Connolly said in a phone interview. “That’s the game plan. That’s always his game plan — to seek and destroy and wear the guy down. He’s not a guy that ever prefers decisions, but I think tonight more than ever, he’s going for the knockout because I think he’s fully aware that fighting in England, in this guy’s backyard, he would probably have to decisively win 11 out of 12 rounds to get the decision, so he doesn’t want to take that chance. So he’s definitely going for the knockout.”

Connolly and Khurtsidze (32-2-2, 21 knockouts) understand the situation they’re in. Connolly, who predicted a late-round knockout, said the location of the fight in Leicestershire at Leicester Arena was a condition of the step-aside deal they made with WBO titleholder Billy Joe Saunders to allow Saunders to pursue a bigger fight with someone such as three-belt champion Gennady Golovkin while Khurtsidze, his mandatory, fought Langford for an interim title.

“We had to play the cards that we were dealt,” Connolly said. “It was part of the step-aside deal to not fight Billy Joe Saunders next. We took this fight as part of that package and part of the deal was fighting over in England. We’re confident he can knock out Langford and if he does, it should open up doors where he should be able to get fights with any of the top guys.”