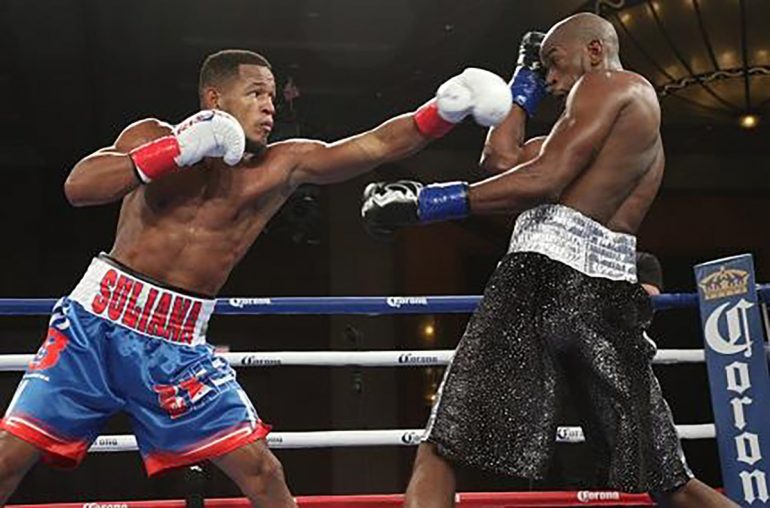 Light heavyweight contender Sullivan Barrera followed through fighting this month, but not in a world title elimination bout as was originally planned. Even against a fighter with half as many fights he has, Barrera still made the most of the opportunity.

Barrera broke down Paul Parker, stopping him late Saturday night at the Mohegan Sun Resort and Casino in Uncasville, Connecticut.

Barrera, who is originally from Cuba and now resides in the Miami area, was penciled in to face unbeaten Artur Beterbiev on Apr. 21 in a world title elimination bout. Barrera backed out of the fight, alleging that Beterbiev’s promoter Yvon Michel did not follow through on verbal agreements.

Main Events, which promotes Barrera, already had the fight card at the Mohegan Sun secured for weeks and eventually decided to put Barrera on to stay busy.

In his previous fight on Dec. 16, Barrera knocked out previously-unbeaten Vyacheslav Shabranskyy in Indio, California. Parker had also faced Shabranskyy in June of 2015, dropping the Ukraine-born fighter twice before being stopped in round three.

Parker, who hails from Toledo, Ohio, held his ground early on against Barrera, even getting his attention late in the opening round with a counter right cross to Barrera’s head.

Barrera eventually showed his pedigree as the bout progressed, closing the distance and scoring more with counter and lead right hands to the head of Parker. Barrera continued to walk Parker down, forcing him to fight defensively and mostly throw one punch at a time.

“We came out a little cold from the locker room, but we eventually found a rhythm during the fight,” said Barrera after the fight. “He caught me a few times early on.”

Late in round four, an inadvertent clash of heads dropped Parker to the canvas. Parker stood up, but appeared dizzy, blinking repeatedly, but taking the entire five minutes allowed to recover from an incidental foul.

About 30 seconds into round five, Barrera staggered Parker with a right hand to the head. Moments later, a barrage of punches dropped Parker to one knee. Parker was able to get up, but later in the round, a left hook dropped Parker a second time to the canvas. Barrera went in for the kill, trapping Parker in a corner and unloading punches until referee Harvey Dock stepped in and stopped the bout at 2:08.

“The key (to this victory) was what we did in the gym,” said Barrera, who has won his last two bouts since suffering his only loss of his career to Andre Ward in March of last year. “Parker is a fighter with little experience, but I still respected him, but we were effective with the right hand. We were able to hurt him and end the fight.”

“My team is looking for the best fights for me. Paul Parker was the best opponent (my team) could find at the last minute. I’d like to fight Joe Smith Jr. It’s a fight boxing fans on social media tell me that they want. I think it’s a great fight for the fans.” 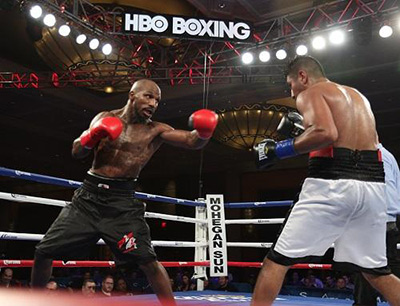 In the opening bout of the HBO Latino broadcast, middleweight Vaughn Alexander won a 10-round unanimous decision over Andres Calixto Rey.

Alexander, the older brother of former world titleholder Devon Alexander, improves to 8-0, with 5 KOs. Calixto Rey falls to 7-6, with 5 KOs.

The Alexander-Calixto Rey fight was promoted to the televised portion of the Main Events card when Arif Magomedov fell ill and had to withdraw from his bout against Elias Espadas.

Alexander mostly dominated the action against Calixto Rey, who was deducted a point in Round 10 for hitting Alexander on a break.

Heavyweight Cassius Chaney from nearby New London won a six-round unanimous decision over Juan Goode (8-5, with 6 KOs). All three judges scored the bout 59-55 in favor of Chaney, who improves to 10-0, with 5 KOs.