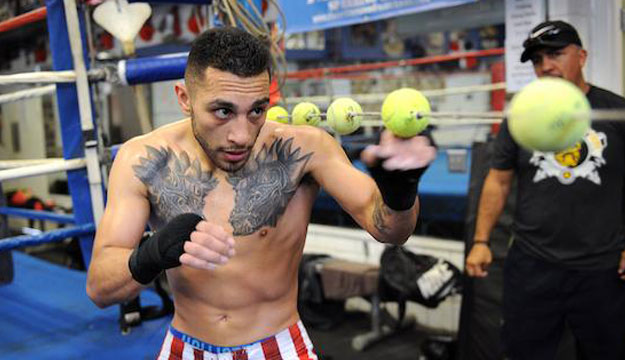 ONTARIO, Calif. — Manuel Mendez has had a penchant for knocking out his opposition in recent fights. Friday night, he demonstrated he could box, even against someone with far more experience than him.

Mendez dominated Luis Arceo, forcing the veteran fighter to remain on his stool after the fourth round in a scheduled eight-round junior welterweight bout.

After losing his pro debut, Mendez has not looked back, winning impressively against modest opposition. His best win occurred on November 4, when he knocked out Vitor Jones Freitas (the nephew of Acelino Freitas) in the opening round of a Showtime telecast.

In his last bout, on March 11, Mendez, who is trained by Joel Diaz, knocked out Bergman Aguilar in the third round.

Arceo, who has faced a who’s who of contenders, prospects, and unbeaten fighters, fought to a draw against Damon Allen in his previous bout, on October 7, snapping a four-bout losing streak.

Mendez controlled the action from the opening bell, utilizing his youth and athleticism to outbox the 38-year-old Arceo. A punch opened a cut over Arceo’s left eye in the third round, prompting questions of how much longer the fight at the Doubletree Hotel would continue.

Arceo attempted to hang in with Mendez in Round 4, but his face had reddened from the number of punches landed. After the round ended, Arceo remained on his stool and referee Raul Caiz Sr. stopped the bout.

Roman was coming off a decision loss to Eddie Ramirez on July 9, while Gonzalez had not fought since his highlight-reel knockout loss to Zachary Ochoa on June 3.

After an even opening round, Roman began landing the more telling blows. By Round 4, Gonzalez’s punch output dropped dramatically and he was dropped twice, both times by a barrage of punches that culminated to the body. Gonzalez fought back bravely in Round 5 but was dropped again, prompting the stoppage at 1:50.

Bantamweight Mario Hernandez, who was making his pro debut, won an action-filled, four-round unanimous decision over Manuel Manzo. Scores were 39-37, 39-37, and 40-36 for Hernandez, who recently signed a promotional contract with Thompson Boxing.

In a clash of junior featherweights making their pro debuts, Xavier Pena won by disqualification at 2:04 of Round 3 when Daniel Guzman landed a low blow. Pena was unable to continue because of the foul, prompting referee Raul Caiz Sr. to disqualify Guzman.

Junior welterweight Alfredo Escarcega was successful in his pro debut, winning a four-round unanimous decision over Mario Aguirre. All three judges scored the bout 39-36 for Escarcega, who was deducted a point in Round 3 for intentionally head-butting Aguirre.

Francisco A. Salazar has written for RingTV since October of 2013 and has covered boxing in Southern California and abroad since 2000. Francisco also covers boxing for the Ventura County (Calif.) Star newspaper, Boxingscene, and Knockout Nation. He can be reached by email at [email protected] or on Twitter at FSalazarBoxing.