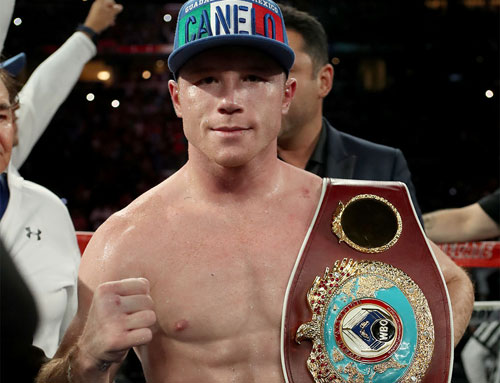 Oscar De La Hoya said he wasn’t aware of a recent report that Gennady Golovkin will likely skip a rumored bout with Billy Joe Saunders on June 10 in Kazakhstan to rest for a possible fall blockbuster with Canelo Alvarez but he seemed pleased by the news.

Golovkin and Canelo are in discussions for a possible mega-fight in September but Canelo has to first get past Julio Cesar Chavez Jr. on May 6 at T-Mobile Arena on HBO PPV before that can happen. When told of the report by Yahoo!Sports’ Chris Mannix, De La Hoya appeared to suggest it was a good indication the fight could be closer to happening  between Canelo and Golovkin.

Canelo doesn’t view his bout with Chavez Jr. at a catch-weight of 164.5 pounds as any sort of preparation for an eventual fight with Golovkin. It’s his first fight above 155 pounds but he doesn’t see the fight as having any mutual benefits.

“No, not at all,” Canelo said on Tuesday. “This is just another fight. It’s a very important fight for me and I’m not focused on any other fighter than the fight in front of me.” The report said that Golovkin needed to rest after his hotly contested unanimous decision victory over Danny Jacobs on March 18 at Madison Square Garden. Though he came out of that fight without any injuries, his trainer Abel Sanchez told RingTV.com last week that Golovkin was sore afterward. Neither Sanchez nor Golovkin promoter Tom Loeffler could be immediately reached on Tuesday for comment.