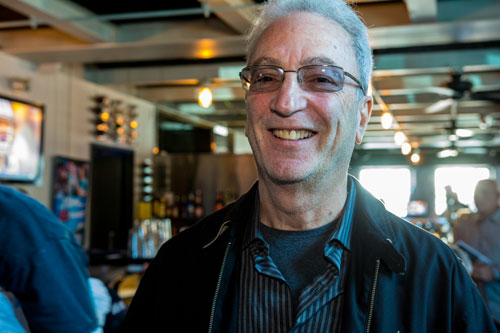 He’s been doing this longer than almost anyone now doing it.

J Russell Peltz has eaten and slept and lived and breathed boxing from back in the days when, if you were fighting, you had to swat the haze of cigarette and cigar smoke, so you could see your foe three feet in front of your face.

Peltz has been doing it before the internet exploded with experts here and there and everywhere, when the writers weren’t hobbyists, when boxers like his junior lightweight contender Jason Sosa weren’t heartily congratulated for doing what fighters do. That is seek out the stiffest competition, in hopes of winning an outsized prize of a purse, so they might grow their fame and fortune to drool-worthy levels.

“It’s a fight,” the 70-year-old Peltz told me, with that tone, the one he and Top Rank Promotions’ Bob Arum and famed trainer Don Turner and other dudes who have forgotten more anecdotes than the young guns have heard, occasionally use. It’s one-part world weariness, a half-measure veiled contempt, a dash of professorial explanation. “Sosa is a 25-to-1 underdog.”

He might win…He might very well lose. And the world will keep turning and President Donald Trump will keep Tweeting and, Peltz said, he would be happy to talk about it Tuesday on “TALKBOX,” no matter the result to the Vasyl Lomachenko versus Jason Sosa tango, which unfolds at the MGM National Harbor in Oxon Hill, Maryland Saturday, April 8, and on “free” HBO.

I admitted to Peltz that I’ve fallen into this trap/habit, talking about who is the pound-for-pound best. It’s because, I think, there isn’t enough real action occurring…so fans are left to talking theories and opinions. Too many promoters protect their cash cows; too many exhibitions and showcases occur…too many good bouts – not even great-on-paper ones – are relegated to behind pay walls. And the buildups, the lead-up, the flirtation process drags on…and on…and on. As with the Canelo Alvarez versus Gennady Golovkin chatter. What if fans decided to just not give a rat’s ass and instead focus on the here-and-now matters at hand?

But, back to this here-and-now…

Sosa has talked a good game, about being willing to die – but he came in .4 pounds over. Peltz didn’t perseverate on that. “Matthew Saad Muhammad was over the weight so many times,” he pointed out.

Peltz is old-school, zero doubt about it. He’s a promoter and, back in the day, less often, arguably, did a promoter have to do a selling job, play up his kids’ chances. The matchup, the fans knew it was legit. They had a darned good idea that the rounds would be even and packed with punching. The writers, who used to prowl the gyms – not buffet lines so much – they knew who was who and what was what. Peltz ranted about an “expert” who likened a solid pro to Willie Pep and snorted. “All these experts,” he sniffed.

Yeah, I know. I sound like a guy yearning for the old days. That’s the mood I’m in and Peltz helped get me there. It isn’t like it used to be. He’s damn right; a Sosa, back in the day, wouldn’t be receiving a stream of congrats for accepting a tough test. That’s what fighters did. They looked for the baddest dude in the joint and they jockeyed until they got to see if the baddest was all that, and all hat, no cattle.

Is Vasyl Lomachenko all hat and no cattle? No. Some tape study will tell you that.

But no, you won’t get far with Peltz if you want to play the “Is Loma pound-for-pound No. 1?” game. Because the Philly-based dealmaker, who promoted his first event a few weeks before I was born, right after the Summer of Love fizzled to a close, counsels you to have patience.

Loma has fought eight times as a pro. Let us see how it plays out, shall we, before we opine and declare how clever we are, by announcing how majestic he is. “Is he pound for pound number one…or the greatest of all time?” Peltz asked, snortingly. “It’s like (Floyd) Mayweather (Jr.)…Would he be undefeated if he had to fight in some of the conditions, and how often, those old-timers did?”

Let’s channel Peltz, shall we, all of us, and traffic in less theory and opining. There will be a fight tomorrow. Maybe the 25-to-1 kid unspools a marvelous effort and makes Loma look like a regular 7-1 guy – not the greatest 7-1 guy in the history of planet pugilism. Maybe Loma drops and stop the Jersey guy. And surely, the world will keep turning, Trump will Tweet and Peltz’s wisdom will hold true. It’s a fight. And fighters fight.

Hey, maybe it’s all for the better. The world can be cruel. Maybe it’s a good thing that all the kids get a trophy now, for participating. Maybe it’s a good thing we heartily congratulate men like Sosa stepping to the line. And let’s also acknowledge, the good old days weren’t always good. They had “Bum of the Month Clubs” then, too. But even if that’s so, we need the Peltzes of the world to help remind us, or inform us for the first time, that, in some ways, we’ve become a little silly. And I have a remedy in mind: Let’s make all those best-versus-the-best fights we’ve pondered a reality. And then, we will traffic in reality and not have to settle for second best: opining.

The good old days might not have always been good but you sure could buy a whole lot more for a whole lot less. Pepperidge Farm remembers…waitaminnit, it’s Michael Woods who actually remembers. Farms don’t remember anything. Because they’re farms.