Hagler-Leonard: The Debate Rages On 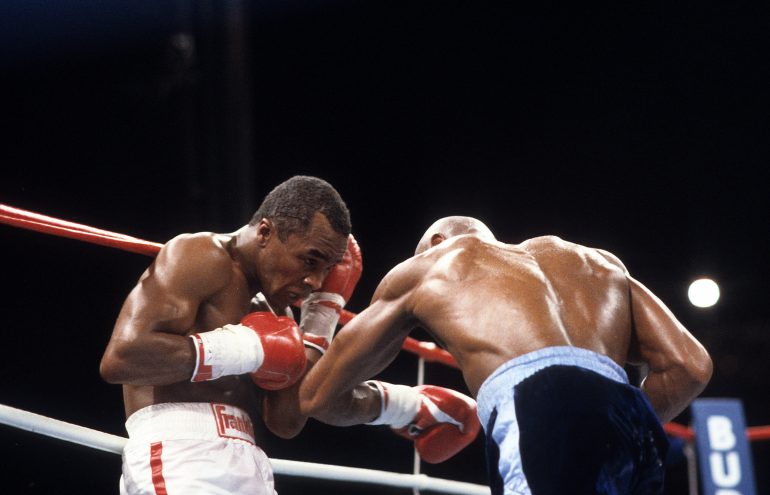 Note: This feature originally appeared in the May 2017 issue of THE RING magazine

On a trip to New York in 2003, I stumbled across Jimmy’s Corner on West 44th Street in Manhattan. A visit to the narrow boxing-themed bar would be a big thrill for any U.K.-based lover of the sweet science and I literally had to be dragged out because I had a plane to catch the next morning.

The one thing I will never forget is the heated debate I encountered as I walked in. “Hagler won that fight,” barked a burly, middle-aged man. “Leonard was too fast and deserved the decision,” countered his equally stout associate. “If you think Leonard deserved that decision, then you don’t know how to score a damn fight!” And so it went. Luckily, the two drinking buddies didn’t re-enact the fight and moved on to other business.

Sugar Ray Leonard dethroned long-reigning middleweight champion Marvelous Marvin Hagler on April 6, 1987, in a sold-out temporary arena at Caesars Palace in Las Vegas. It was the comeback of comebacks. Leonard had fought just once in five years, because of potentially career-ending eye surgery, yet defeated one of the most feared fighters on the planet. Like Floyd Mayweather Jr. vs. Manny Pacquiao, this matchup was six years in the making – but Hagler-Leonard lived up to the hype.

The controversial 12-round split decision in Leonard’s favor elicits as much emotion as any verdict rendered in the modern era. If you want to piss off a Hagler fan, and you’re brave enough, then this is unequivocally the best place to start.

“Because they gave the fight to the loser and not the winner,” said RING contributor Ron Borges, who worked for the Boston Globe at that time and, from ringside, had Hagler winning the bout by seven rounds to five. “People will always debate it because both guys were so popular. They had loyal fans and that fight was eagerly anticipated for a very long time. Many people also felt that Ray, as he often did in his career, made a calculated decision to fight Hagler when (Hagler) was past his best and they hold that against him. The nature of the fight itself is another factor. There are those, including myself, who felt that Marvin didn’t fight the smartest fight but Hagler supporters feel that Ray didn’t do anything; he just stole rounds in the closing seconds.”

Some feel that Leonard had a one- or two-round advantage before the opening bell for sentimental reasons; the David vs. Goliath symbolism could not possibly be lost on the judges. Former welterweight champ vs. reigning middleweight champ. Inactivity vs. dominating title reign. Fragile right eye vs. bulletproof skull. The fact that Leonard was competitive against Hagler was astonishing to most onlookers. Perhaps American broadcaster Tim Ryan said it best during the commentary: “It’s going to be difficult (for the judges) to separate what they admire in this performance (by Leonard) from what is actually happening.”

“That might be true, I’m not sure,” said Hall of Fame boxing writer Mike Katz, who covered the bout for the New York Daily News and favored Leonard 117-112. “Ray fought so smart and would close each round with a flurry. He would do most of his best work in the last 30 seconds and steal rounds. Marvin just couldn’t get going and made a mistake by starting out orthodox. He told me once that he was not only the best southpaw middleweight, he felt he was the best middleweight in the orthodox stance. I think he believed that. And while it may have been true in his prime, this was not prime Marvin Hagler. I think if they had fought when both were in their primes, Marvin would have killed him.

“I remember writing that although I was picking Leonard to win (Katz officially changed his prediction to Hagler the day before the fight) the matchup would prove nothing in terms of who was the better man. Leonard was a great fighter but he wasn’t a middleweight, and Marvin, for me, was the best middleweight since (Sugar Ray) Robinson. When I was there live, I thought that Leonard was winning round after round. In hindsight, maybe I didn’t give enough credit to Marvin for landing the heavier punches because every time I look at the fight, it gets closer and closer.”

In capsule form, Leonard got off to a great start and then Hagler found his range. By the middle rounds, the champion frequently pinned his rival against the ropes and outworked him on the inside. Leonard was shaken momentarily in the fifth and the ninth but, amazingly, had strong, sturdy legs in the championship rounds. The challenger won two of the last three rounds on two of the judges’ scorecards to secure the most important victory of his career. The 32-year-old Hagler had lost for the first time in 11 years and was absolutely crestfallen. He would never fight again.

“When the fight was over, Hagler stayed in the locker room for a long time,” recalled Borges, who was very close to both the fighter and his team. “He was with (former world title challenger) Robbie Sims and the Petronelli brothers (Hagler’s trainers) and they were all livid. We finally left and walked from the back of Caesars Palace, past the pool area towards the hotel. Suddenly there’s this guy loading beer into the back of a truck and Marvin asks him for a beer. The guy turned and said, ‘Jesus, it’s Marvin Hagler’ and gave him a case. I remember Marvin turned to me and asked, ‘How can you lose a fight when you don’t get hit?’ What he meant was, hit in a way where there’s significant damage. The only damage done in that fight was done by Hagler.

“If there had been any other boxer in that ring that night, other than Ray Leonard, and that fight went the way it did, they would have raised Marvin Hagler’s hand at the end. Do you think if that had been John Mugabi, they would have raised Mugabi’s hand? Marvin felt – and I think most boxing people would agree with this – that you have to take the championship from the champion. He’s defending it, the challenger has to take it.”

Not every boxing person agrees with that philosophy. Jose Juan Guerra was one of the official judges. He turned in an astonishingly wide 118-110 card for Leonard. The other two judges, the late Lou Filippo and Dave Moretti, had it closer: Filippo favored Hagler 115-113 while Moretti scored it for Leonard by the same score.

“You should pretend like the fighters are your brothers,” said Moretti, an official in Nevada for 40 years. “I don’t care who the champion is. I don’t care what their last name is. I don’t care about none of that. All I care about is that there are two people doing their best in the ring and I need to do my best on the outside.

“I can’t speak for the other officials but I don’t care who (the fighters) are. I don’t care about religion, color – nothing – I show no bias towards anybody. You have to score the round exactly as you see it. Forget who’s attached to the gloves, just score the round. Be honest, be dedicated and always remember: These fighters went through hell to get to this point. They don’t just climb in the ring and fight, it’s a very tough life being a boxer.”

The third man in the ring that night was Richard Steele who, by 1987, had established himself as a respected referee. Steele worked Hagler’s three-round demolition of Thomas Hearns two years earlier and would officiate a plethora of superfights during a classic era. In the Hagler-Leonard fight, Steele warned the challenger on several occasions for hitting after the bell and holding, but no points were deducted.

“I followed the rules and regulations,” Steele said. “I was conscious of enforcing those rules in that fight the same way I was in every other fight. I was never close to deducting points. I issued strong warnings but there was no need to take any points off because Leonard followed my instructions after I warned him. There was no advantage (gained).

“When it was over, I really didn’t know who had won. I felt it was a very close fight and either one of them could have pulled it out. The more I watch it the closer it gets but I still think that Leonard deserved it, by a very close margin. It was one of the best fights I was ever involved with.”

In a poll conducted via THE RING’s official Twitter account (see chart below), 1,749 people voted on who they felt won the fight. The results favored Hagler but it was far from one-sided. I also contacted several former and reigning world champions for their views but abandoned that idea because so many of them were non-committal about the outcome. I’ve watched the fight dozens of times and the final round is actually one of my earliest boxing memories. I’ve always scored in favor of Leonard, although my most recent card is the closest I’ve ever had it (115-114 Leonard). 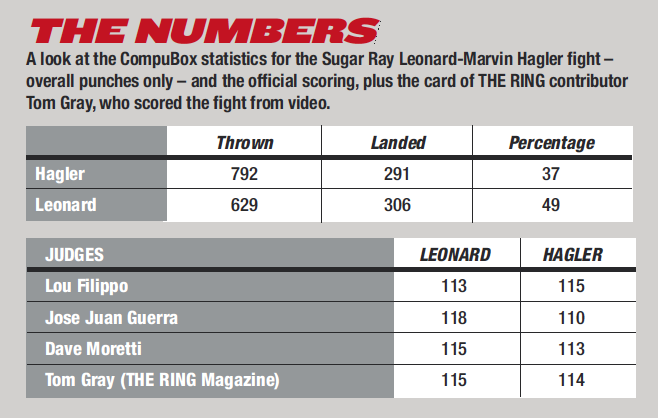 The most ardent Hagler fans will forever consider the decision highway robbery but the most objective among us wonder whether that is the result of admiration for their great champion and contempt for Leonard. For the most part, all avenues point to this being an extremely close fight. Leonard himself acknowledged that fact.

Of course, fans will never forget one of the most disputed decisions in history. Ultimately, though, it didn’t make or break either of the great participants.

“Leonard’s legacy was secure following his wins over Hearns, (Roberto) Duran and (Wilfred) Benitez,” said Katz when asked whether Leonard truly needed Hagler as a signature victory. “He was going down in history as one of the all-time greats and, pound-for-pound, I still think he was better than Hagler. Hagler was just bigger and in their primes, I believe Hagler would have won because of his size. You couldn’t hurt Marvin; he had one of the greatest chins ever.”

Borges believes that Hagler is the best middleweight of all time. And although he also regards Leonard as “one of the greatest fighters ever,” he couldn’t resist teasing him about the Hagler fight several years later.

“I once provided commentary on a fight card with Ray and Barry Tompkins,” he said. “I can’t remember what the main event was but there was a preliminary bout on and we were struggling for things to say. Finally, I said, ‘Hey Ray, there’s a question I’ve been meaning to ask you for a few years.’ He asked me what it was and I said, ‘If you had ever fought Marvin Hagler, do you think you would have won?’ Barry Tompkins starts laughing and Ray’s eyes were bulging out of his head. When the broadcast was over Ray was still pissed at me. He said, ‘I can’t believe you f—ing did that!”

Feelings will always run high when it comes to “The Superfight.” Hagler was unavailable for comment before our deadline but it’s common knowledge that the Leonard fight isn’t his favorite topic of conversation. He feels he was screwed. Many agree with him, many don’t. That’s not up for debate.

Tom Gray is a UK Correspondent/Editor for RingTV.com and a member of THE RING ratings panel. Follow him on Twitter: @Tom_Gray_Boxing