My road to THE RING 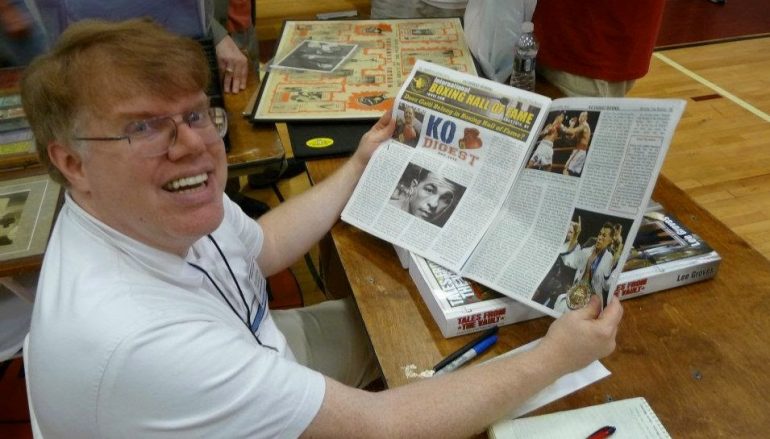 Over the years, aspiring boxing writers have asked me how I was able to secure a paid gig writing for THE RING and its sister website RingTV.com. A few weeks ago, I recounted the road I took in earning a full-time job with CompuBox and while it comprises a large part of my ultimate professional dream, I still feel a need to honor the journey I took to reach the goal to which I committed as a teenager.

What many may not know is the RING portion of the dream was achieved not just once but on two separate occasions.

Most of you know me as “The Travelin’ Man.” However, in the late 1980s, I had about two dozen fight reports and feature pieces appear in the magazine as well as its then-sister publications. For those who ask me how I got here, I say this: As was the case with CompuBox, both stints with THE RING happened due to a mutual leap of faith followed by a sustained effort to stay in the room once the door was cracked open.

Less than a year after graduating magna cum laude from Fairmont State College in 1987 with a major in English and minors in journalism and technical writing, I noticed THE RING lacked a West Virginia correspondent for its “Rings Around the World” section located in the back of each issue. Knowing that a fight card was to be staged in a couple of weeks’ time in Parkersburg (located 35 miles from my home), I placed a cold call to THE RING’s office, introduced myself, briefly told them about my writing background and offered to cover the upcoming card. To my surprise, the person on the other end said yes and promised to mail me a press card that I would need to gain access to the media section.

I covered about a half-dozen such cards and even offered to do write-ups off TV of the weekend Spanish-language cards emanating from the historic Arena Coliseo in Mexico City, which aired on Galavision. They must have liked my work because they also said yes to that request. It might also have been because I was doing all this for free.

Thanks to this door being opened, I was regularly communicating with editor-in-chief (and future Hall-of-Famer) Nigel Collins and managing editor Phill Marder, both of whom offered encouragement and opportunity. How meaningful were these communications? I still have several of Nigel’s letters in my archives.

During a few of our conversations, I asked for the chance to do a full-length feature. At the time, I thought that opportunity would come after a few years of seasoning but, just months after my initial fight report was published, I got a call from Marder. He said correspondent Wes Moon had begun work on a feature chronicling the infighting between the WBA, WBC and IBF before the Mike Tyson-Michael Spinks fight but, for whatever reason, he was forced to abandon it.

“Would you like to take over for him?” Marder asked.

I was stunned into silence. After all, I was a 23-year-old who was a little more than a year out of college and this was a marvelous chance to cover a major story. I took a few seconds to absorb the situation. Moments later, my trance was broken.

“Well, are you going to do it or not?” Phill barked.

Phill gave me a bit of background as well as several phone numbers. I scored an hour-long phone interview with then-WBC President Jose Sulaiman (which rolled up a $109 bill) and a similarly lengthy one with then-IBF chief Bob Lee. However, the WBA’s Gilberto Mendoza Sr. and James Binns stonewalled me, so much so that I ended up writing a sidebar story called “WBA: Why Bother Answering.” That, along with the main story (“The Alphabet War: Who’s Zooming Who”) was published in the December 1988 issue.

The bigwigs were so pleased that I ended up writing nearly a dozen other features over the next few years. So, in a very real way, my dream had been achieved and I was still in my early-20s. Here, I also began working with Steve Farhood, who took over as editor-in-chief after the magazine was sold to Stanley Weston. At the same time, I worked stints with the Tyler Star-News, the Wetzel-Chronicle in New Martinsville, West Virginia, (as a typist), the Marietta Times (as a part-time sportswriter) and The Parkersburg News (which materialized only after I was blocked out of a chance to become a full-time sportswriter at the Times).

With my writing career seemingly at full throttle, I decided to roll the dice and ask if THE RING had any full-time openings available, adding that I would be willing to move to make it happen.

“Not only do we not have any full-time jobs open now, there probably won’t be any in the foreseeable future,” I was told.

Those words cut through me. The dream, as I knew it, was dead. With my growing responsibilities at The News, there was precious little time to do much else. Aside from the occasional non-compensated column for The News, I refrained from boxing writing for more than a decade.

So how did I get from there to here? Again, it was the result of turning a chance moment into initiative and turning initiative into opportunity. Believe it or not, a throwaway line by Max Kellerman started it all.

I was watching a tape of an episode of Friday Night Fights that I had recorded, while at work earlier that evening, when Kellerman, then a studio analyst for ESPN, referenced the boxing website MaxBoxing.com. “And no, it’s not a site entirely devoted to me,” Max joked. That remark prompted me to visit the website the following morning and on its home page was a column entitled “The Gym Rat” in which Marty Mulcahey answered queries by readers regarding boxing trivia. Being a sucker for trivia, I immediately clicked on it and began reading.

In the course of that column, I noticed one of the answers was incorrect, so I clicked the email address and politely informed Mulcahey about the error. Some writers would take umbrage at being corrected but Mulcahey was (and still is) a class act. He thanked me for the correction and promised to rectify it in his next column (which he did). This exchange led to several other emails in which I described my past writing experience with THE RING, which prompted Mulcahey to contact one of MaxBoxing’s editors – Doug Fischer.

Fischer offered me the chance to write as an unpaid contributor, with the possibility of becoming a paid columnist, should the funds become available. I jumped at the chance and I got my first test during the early morning hours of Valentine’s Day 2003.

I had just come home from work at 1:30 a.m., when I turned on my computer and checked my email. I was copied on a message Doug sent Mulcahey, asking if one of us could write an obituary for Kid Gavilan. Marty couldn’t do it due to work responsibilities, so it was up to me to produce the piece. Over the next couple of hours I wrote an article on “The Keed’s” life and times, did some quick polishing on my first draft, hit the “send” key and went to bed. When I got up the next morning, my article was on MaxBoxing’s home page.

I proved my worth by coming through at a critical moment and it was rewarded a couple of years later when MaxBoxing, now blessed with additional funds, began paying me. It was on this platform that I launched the “Closet Classics” series that eventually became my book “Tales from the Vault.”

All seemed well…until those in charge at MaxBoxing stopped paying me.

Out of a deep sense of loyalty, I continued to write for another six months on the understanding that the backlog would eventually be made up. It wasn’t and I wasn’t the only one being stiffed. I resigned from MaxBoxing and, for a short time, wrote for BoxingScene, who, several months later, stopped paying me as well.

By now, Fischer was working as the editor-in-chief of RingTV.com. I wrote him an email explaining my situation and asked whether there was a spot for me on his staff.

It didn’t take long for him to respond: “When can you start?”

It didn’t take me long to reply: “How about now?”

It’s funny how life tends to run in circles. Fischer was once my boss at MaxBoxing and now he’s my editor at THE RING. Farhood was one of the first editors to give me a chance to broaden my writing horizons and not only do I work with him regularly as part of the “ShoBox” series, he wrote the foreword to “Tales.”

My road to THE RING has been unorthodox and, given that I come from a town of 130 people, highly improbable. However, several traits unite the seemingly by-chance threads: The perceptiveness to recognize a potential opportunity, the courage to reach out to people in positions of power, the work ethic to not only complete assigned tasks but also the willingness to go above and beyond to turn in a quality product that bears a unique signature, the eagerness to sacrifice financially in the short-term, so the long-term dream can be furthered and the unshakable belief that all the effort will lead to the mountaintop.

I didn’t reach my mountaintop until I was 42. I didn’t take my first plane ride (or even step inside an airport) until I was 40. But now, at 52, I have traveled the globe and have accrued experiences that can’t be bought. Let this be said: The reality has far superseded the fantasy.

As I write this, I couldn’t be happier or more fulfilled. I’ve been told that I look far younger than my age and that’s because my mind is no longer anxious or filled with professional dread. In its place is an eagerness to start the next working day. Sleep, to me, is a necessary interruption to my fun.

If you can channel your knowledge and talent properly and work your hardest when asked, then my road can be your road. I am living proof that dreams do come true.

Lee Groves is a boxing writer and historian based in Friendly, West Virginia. He is a full member of the BWAA, from which he has won 15 writing awards, including 12 in the last six years and two first-place awards since 2011. He has been an elector for the International Boxing Hall of Fame since 2001 and is also a writer, researcher and punch-counter for CompuBox, Inc. He is the author of “Tales from the Vault: A Celebration of 100 Boxing Closet Classics.” To order, please visit Amazon.com. To contact Groves, use the email [email protected].