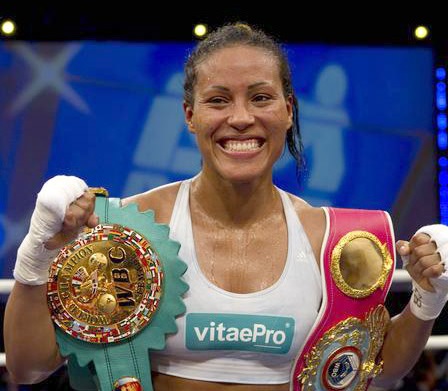 Cecilia Braekhus once again earned her moniker as the “First Lady” of women’s boxing, defending her complete collection of welterweight belts with a near-shutout decision over Klara Svensson on Friday in Oslo, Norway.

Svensson’s best round was the second, in which she managed to buckle Braekhus’ legs with a right hand. It wasn’t clear if Braekhus was truly hurt by the punch — she held on and then got an extra few seconds to recover as the referee warned her for hitting behind the head — but she was soon beyond a doubt in control of the fight. By Round 4 she was owning Svensson with power punches, and a round later the Swedish challenger was showing the fatigue of her impossible mission.

Braekhus was just the better fighter in every way. While Svensson bounced around erratically and launched inaccurate, flailing attacks with her head down, Braekhus remained calm and rock-steady, always watching for the chance to deliver her more disciplined, accurate punches. There were a handful of body shots but the fight was almost exclusively a headhunting contest.

Comparisons to Floyd Mayweather Jr. are inevitable, both for the way Braekhus fights — with her lead hand down, pretty much landing at will, blunting her foe’s attacks with adept blocking and fast feet — and for her dominance. She’s now 30-0 (8 knockouts), holds the IBF, WBA, WBC and WBO belts and sits at or near the top of every pound-for-pound list.

And this latest victory was against Svensson (17-2, 5 KOs), whose only other loss was a competitive decision against pound-for-pounder Erica Anabella Farias in 2015. Against Braekhus, Svensson was out of her league.

It was the second fight for Braekhus in her adopted homeland (she was born in Colombia) since a Norweigan boxing ban that had lasted for more than three decades was lifted. Scores were 100-90, 99-91 and 99-91.