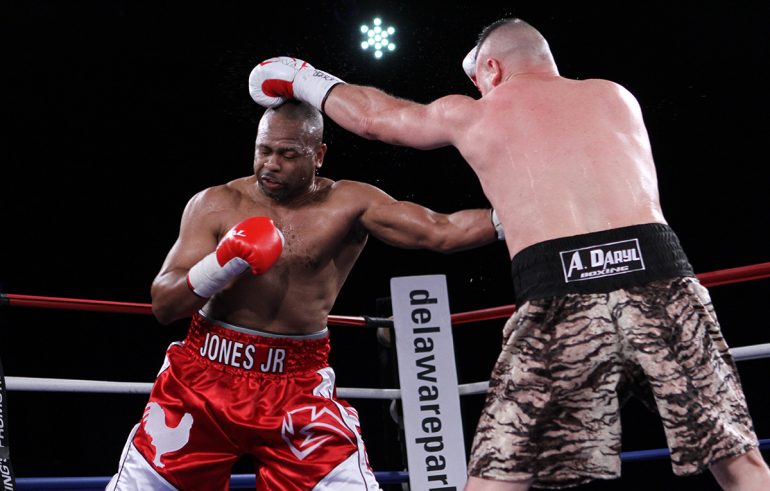 Almost 10 years removed from his last significant victory (a decision over Felix Trinidad in January 2008), Roy Jones Jr. (pictured here against Bobby Gunn in February) continues to fight despite the dangers that come with professional boxing. Photo by Mike Greenhill
18
Feb
by Joseph Santoliquito

WILMINGTON, Delaware — They filled the Chase Center on the Waterfront, 2,200 strong Friday night, all waiting to see a ghost. It’s been over a decade since Roy Jones Jr. — the real “RJ,” the multi-division world champion, the dynamo who possessed otherworldly hand speed and quickness — was last seen.

So any glimpse of that vintage version would have sufficed.

The fans got to see a good dose of it in person when Jones smacked around cruiserweight Bobby Gunn, who last fought in 2013, for seven rounds en route to an eighth-round TKO.

The reality was that it was more of a freak show than a boxing match, like Jones (65-9, 47 knockouts) imitating who he used to be. Jones and Gunn were a combined 91 years old, Jones is 48 and Gunn is 43. Once more, Gunn had not fought, at least not in the ring, in four years. He lost his last three fights to other glorious specters trying to rekindle some flicker of their pasts in Glenn Johnson, James Toney and Tomasz Adamek. A crude brawler, Gunn gamely lasted nine of a scheduled 32 rounds between the trio. To fill his time between boxing, Gunn (21-7-1, 18 KOs) chose to fulfill his fighting passion with bare-knuckle brawls in basements and smoky bars.

But Gunn’s penchant for brawling disappeared when he faced Jones.

Each time Jones moved, it was if you could hear the creaky squeak of gears in sore need of grease. And here’s the twist, he looked like he could still beat a lot of pros half his age.

The first couple of rounds were a tapfest. Jones exhibited some of that classic speed, and even flashed a smile or two. Gunn appeared content just to be in the ring with a future Hall of Famer—well, faded future Hall of Famer who, for a 48 year old, looked in great shape.

In the fourth round, Gunn finally landed a punch. Jones played along by doing a little wiggle as if he was hurt. That seemed to enliven Jones, who opened up a portion of his past with a heavy dose of single shots that began lumping up Gunn. But there was also something else that surfaced in the fifth round of the scheduled 12-rounder, Jones was laboring. He was perspiring far more after five rounds than the younger version did.

Still, Jones caused Gunn to become even more reluctant in the sixth. By the seventh round, Gunn’s face began opening up and he took two steps out of his corner in the eighth and that’s when he had enough. The fight was waved over at :07 of the round.

“I never enjoyed getting beat up so much by anyone in my life,” Gunn said. “Roy Jones’ power made me shake into my spine. I did something in my Irish gypsy traveler life, and I can say I fought the greatest fighter of all-time.”

Then Gunn took a picture with Jones.

In fairness to Jones, he was gracious in victory, incredibly accommodating to the waves of fans that filled his dressing room after the fight, taking pictures, signing gloves, doing interviews.

And he didn’t rule out continuing to fight.

“Anything is possible, I’m not going to make an immediate decision,” Jones said. “Why would I stop when I looked that good though? I know the opponent wasn’t the best of opponents, but I felt good, I looked good. I want a shot at a cruiserweight title, and I know I looked good. I have other stuff going, but right now, I do intend on fighting and we’ll see what happens in the future. I looked good.

After being serenaded by Zhanar Dugalova, the female Elvis of Kazakhstan who sang a beautiful song in a language no one in the audience understood, the co-feature was incredibly exciting, for as long as it lasted. Undefeated Kazakhstani junior middleweight Kanat Islam stopped Robson Assis at 2:12 of the first round. Islam (23-0, 19 KOs) was in some trouble early on, however, suffering a severe cut over his right eye from a head butt. Though Assis (16-4, 9 KOs) lost three of his last five fights, he made it interesting. He came at the powerful Islam, and tried playing Islam’s game of trading punch-for-punch.

But with the crimson stream running down the right side of Islam’s face, the fight carried more intrigue to the fans than what was happening. Islam’s thudding shots began taking a toll, and after a barrage of punches, Assis slumped to the canvas.

Then Islam proceeded to call out Canelo Alvarez.

“He’s avoiding me, you would see what would happen to him if he faced me,” Islam said afterward.

Alvarez probably doesn’t know who he is.