Talkbox: Still on track to see Canelo vs. GGG 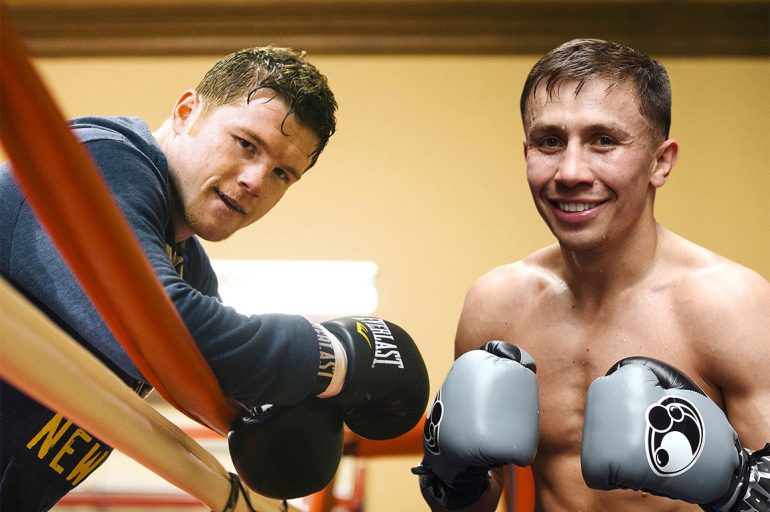 At the Tuesday taping of the Everlast podacst “Talkbox,” I had RingTV.com expert Mitch Abramson in studio, and then had veteran writer/reporter Steve Kim call in and chat.

We touched on a wide variety of topics, from the Saturday matchup of the Adrian Broner-Adrien Granados, and also what comes next for Gennady Golovkin and Canelo Alvarez, if things go to form, and each favorite gets past their next opponent. GGG next month takes on Danny Jacobs, a highly rated Brooklyn resident with some pop and fast-twitch muscle elasticity which is of the variety that could test the Kazahk’s chin more than any of us have seen.

But the logical next step after that tango and after, as we three all expect, Canelo’s structured methods of training and on-message technical chops take him past Julio Cesar Chavez Jr come May, is a fall face-off between 3G and the red-headed hitter who would find himself at Chavez Sr. level of respect within the homeland if he bettered GGG.

But the thing is this.

Some folks have gotten to feeling like that we have gone beyond marination and into a spoilage stage. Me and Kim and Mitch debated the possibility of us fight fans all being rewarded with a fall fest of fistic fury, pitting Golovkin against his younger rival who has to be hoping that GGG slips a notch or so because of time passages’ inevitable deteriorating effects. Now, we writers are guessing. We aren’t in those war rooms. We aren’t on those jets where the big boys talk future plans of takeovers and the like. One guy who is, is Eric Gomez, President at Golden Boy Promotions. He and GBP CEO/Founder Oscar De La Hoya are building their boxing brand around the redhead.

So, I put it to Gomez on Wednesday, the day after we touched on the subject at “Talkbox.” Eric, I asked, is the plan to make Canelo versus Golovkin this fall? I mentioned September. “Yes, absolutely,” Gomez told me. “That has been the plan for awhile.”

He didn’t hem or haw or talk about this element or that which needs to be attended to, he didn’t leave wiggle room. That’s the fight that all the parties are aiming toward, he made clear. On the show, it was said by one of us that the howling from fans if the GGG-Canelo tango didn’t come this fall would be heard from NY to New Zealand. This one has to get made, if the best laid plans for GGG and Canelo go as conventional wisdom suggests. Gomez admitted that he will be quite nervous that Jacobs could mess up the pathway and also noted that Chavez is right now at a good weight, working well with Nacho Beristain and will have personal and professional pride up for grabs against Canelo. In other words, let us see how the next for GGG and then Canelo play out..and if the oddsmakers have it pegged right, and both favorites perform to expectation, then your patience will be rewarded and September will see the most anticipated prize fight of the year come to fruition.