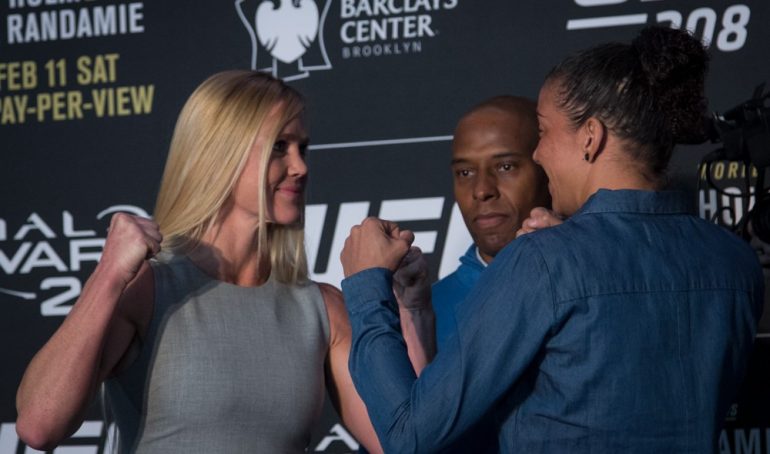 BROOKLYN – Germaine de Randamie outpointed former bantamweight champion Holly Holm over five rounds on Saturday to win the inaugural 145-pound title at UFC 208 in Brooklyn, New York. All three judges scored the bout 48-47 for de Randamie in a fight that was very difficult to score.

The win gives De Randamie her first UFC belt and also answers critics that condemned her previous opposition, who combined for a 0-6 record in the Octagon.

“It was a close fight. She caught me in the third round,” De Randamie said. “It was a good kick but you won’t knock me out that way and I kept coming. She didn’t want to fight me but I am a warrior and I came here to fight.”

Holm now drops to 0-3 since her stunning knockout of Ronda Rousey at UFC.

With the crowd clearly on her side, Holm, a Jackson-Wink MMA product, briefly knocked de Randamie down with a head kick in the third to turn the tide her way. The former boxing champ hurt de Randamie with a knee to the body and a hard-straight left-hand in the fifth but she still could not finish the Netherlands native.

Controversy struck the fight in the middle rounds, as de Randamie landed two clear punches after the bell to end the second and third rounds without being disciplined. A point deduction would have made the fight a draw on the score cards and could have even gave Holm the momentum boost she desperately needed.

“I think she landed the punches after the bell on purpose and they were two of her hardest punches of the night,” a disappointed Holm said. “It’s very disappointing to not to be able to get the job done because my coaches gave me all the tools to win I just didn’t execute tonight.”

In the co-main event, Anderson “Spider” Silva displayed some his classic counter-punching skills at 41 years old.

Despite being past his prime, Silva (34-8) had enough dominating moments to win over the judges and defeat middleweight contender Derek Brunson via unanimous decision. Many had the fight going Brunson’s way, but Silva did just enough to get his first official win since 2012 and snaps a four-fight losing streak.

RingTV.com scored the fight 29-28 in favor of Silva.

“I’m too old to fight. These young guys are fast and strong. But I put it in my heart.”

All three rounds were close, as Brunson out-landed Silva in total strikes 118-to-54. He was also credited with two takedowns, one in the final round. To Silva’s credit, he stuffed six of Brunson’s takedown attempts and fought with great urgency in the third round knowing the fight could go either way.

For Brunson, this decision was heart-breaking as he has lost two-fights in a row after a five-fight win streak ended in November.

“Everyone is telling me that I won. I feel terrible,” Brunson said in his post-fight interview. “It’s not Anderson’s fault or the UFC’s fault. I took this fight on short notice and to have this happen is just crazy to me.”

“I take this seriously. This is my job. I put everything into this and I got robbed. It sucks.”