Collazo likely out until summer after cut in win against Vasquez 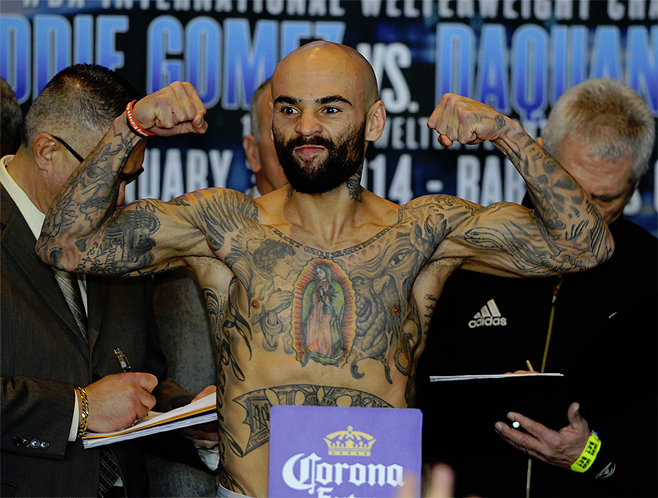 Luis Collazo, who leveled Sammy Vasquez with a one-punch knockout last Thursday to revive his career, will be out until the summer as he recovers from a cut above his right eye that required stitches, his advisor, Keith Connolly, told RingTV.com.

“Per doctors’ instructions, he could be back in five months and be 100% healthy,” Connolly told RING. “So, we’re thinking early summer to mid-summer. But we want to go directly to a big fight. There’s no one that we’ll turn down. Luis thinks he can compete with any of the top guys.” Collazo (37-7, 20 KOs) sustained the cut in the third round, the result of a punch. Moments later, however, Collazo dropped Vasquez (21-2, 15 KOs) with a short right with a minute left in the round, a sign of things to come.

“He said he got some stitches, nothing that won’t heal in a few months,” Connolly went on. “He definitely has to take a couple months off but he’s going to get back into the gym in a few weeks, he said, just to stay in shape.”

Collazo, a former welterweight titleholder, called out Shawn Porter in the in-ring interview following the win, a sixth-round knockout courtesy of a short right in Tunica, Mississippi. A bout involving Porter would be welcome, but Connolly expanded the wish-list of opponents to also include Amir Khan (in a rematch), the winner of Danny Garcia-Keith Thurman (or even the loser), Andre Berto (in a rematch), Errol Spence Jr. if he wins the belt from Kell Brook, among others. In a phone conversation with Collazo on Friday morning, Connolly said the 35-year-old southpaw singled out Porter and Berto as the preferred opponents.

“He doesn’t think that Berto would fight him but that was a name that he threw out there,” Connolly said. “He’d like to have the rematch in that fight. And he also mentioned Porter because he thinks that’s a top, competitive fight that the fans want to see. He knows Shawn Porter isn’t a guy that ducks anybody. He’ll fight all comers and Shawn Porter is looking for a fight right now.”

Ironically, Berto and Porter have had talks about a possible fight in the spring. Connolly said that if Berto “was hesitant to begin with (to face Collazo), I think after last night he’d be a lot more hesitant now. I don’t think he wants any part of Luis. I think a guy like Shawn Porter, who would fight anybody, would be the most likely candidate. But we’ll fight any of the top guys.”