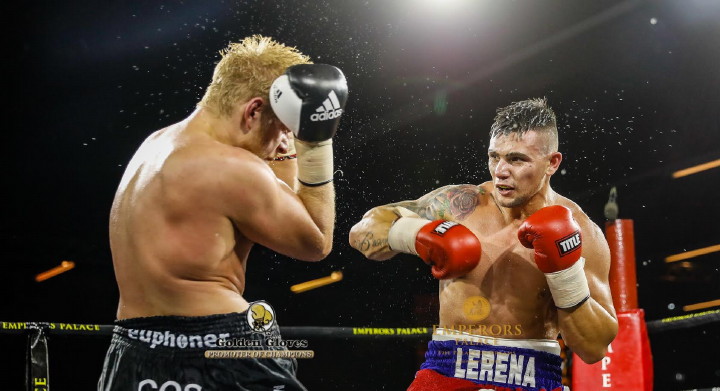 Best night of pro career: Lerena is most pleased with his most recent performance when he won the “Super Four” tournament, besting Micki Nielsen in the final round by majority decision.

“(My) best performance is (against) Micki Nielsen,” Lerena told RingTV.com. “He was unbeaten and was ranked in the Top 10 in the world at the time.”

Worst night of pro career: Unsurprisingly, Lerena feels most disappointed with the lone blemish on his ledger.

Next fight: On Saturday, the South African will face the experienced Vikapita Meroro (28-5, 14 KOs). The scheduled 10-round contest takes place at the opulent Emperors Palace, Kempton Park, which is just 25 minutes from his home.

Lerena is respectful of what the Namibian brings to the bout: “Meroro is a credible opponent. He brings a lot of experience and ring craft to the table.”

Meroro, 31, has been inactive for 21 months prior to this fight, which isn’t ideal. However, he is durable and, despite the layoff, will be expected to give Lerena rounds. Meroro has only been stopped once in his decade-plus career.

He has lost when he has stepped up in class, notably against Isaac Chilemba (UD 12), Juergen Braehmer (UD 10) at light heavyweight and, most recently, he was stopped in six rounds by Russian wrecking ball Dmitry Kudryashov.

Why he’s a prospect: Although Lerena didn’t have an amateur career, he turned pro and was able to learn on the job. With that, he’s won all, bar one, of his fights to date. He was able to rebound from the loss with two wins before gaining a measure of revenge, stopping the only man to beat him. That shows Lerena’s been able to adapt and progress.

Of his 17 fights, 16 have taken place in South Africa. The one time he traveled, he went to Denmark, admittedly against a journeyman but it provided a valuable learning curve.

Lerena is currently ranked by three of the four sanctioning bodies, the WBA ranks him at No. 13, the WBC at No. 11 and the WBO at No. 5).

His promoter, Rodney Berman of Golden Gloves SA, is very high on his young fighter.

“Kevin Lerena brings loads of charisma, matinee-good looks and is a role model for youth, with a great work ethic and clean living,” enthused the veteran promoter. “Incredibly he’s never had an amateur fight, yet he is a natural and every fight brings him on in leaps and bounds. (He’s) fast becoming a real threat in what is now a very viable division. He will be making his USA debut with Banner Promotions shortly.”

When asked what he feels his strength as a boxer is, Lerena said, “My best attribute as a fighter is that I think and I’m smart.”

Why he’s a suspect: At this point, Lerena appears to have settled into the pros very well. However, could his lack of amateur experience become apparent as he reaches world-level, in a talent-laden division?

In his five-year career, Lerena has experienced weight fluctuations, weighing in excess of 200 pounds for seven of his bouts. To his credit, he’s been more disciplined of late and has weighed just inside the cruiserweight limit in his last four outings. He needs to remain disciplined if he is going to make his mark at 200 pounds.

Although, he is nicknamed “The KO Kid,” Lerena’s knockout ratio is 47 percent and he only has one stoppage in the last five fights. He seems to have developed his all-around game and is no longer relying on his power.

Lerena feels there is work to be done before he is able to fight the top cruiserweights in the world, estimating he’s around a year away from those challenges.

“I need to sharpen up my skills to an even higher level,” he said, “so I can take the boys on at the top and beat them.”

Story lines: Lerena grew up in Johannesburg on a farm. His family has a deep horse racing background. He played various sports but horse racing was his first and only love.

His uncle Tex is a former jockey, who, until recently, was the chairman of the South African Jockey’s Association. His cousin Gavin is considered an all-time great in South African horse racing circles, having been National Champion and riding a record 283 winners, during his apprenticeship.

“I grew up in a horse racing family,” he said. “It’s all we knew. I started riding at 12 and had my first race at 15, which I won. I was still a boy. But at 16, I suddenly shot up in size, from 58 kilograms (approximately 128 pounds) to 68 kilograms (approximately 150 pounds, a 22 pound difference) in about a year. I had dreamed to be a jockey from around the age of nine, so I was pretty devastated…It was the end of a dream. For many years, I had nothing else on my mind.”

He had learned to box and his reason for taking up the sport was simple: “I didn’t want to be bullied, so I decided to learn the fistic art.”

Until 2011, Lerena was a keen rugby player; he also dabbled as a bouncer at nightclubs and formed a security firm that looked after global star Justin Bieber ahead of a concert in 2014. But boxing was where he felt his future lay.

His intentions are to make a name for himself and leave a lasting legacy behind.

Lerena has a full life away from boxing. He is married to wife Gina and the couple have a young son Brooklyn, both being his No. 1 motivation. The 24-year-old loves to play golf and still follows horse racing. He also enjoys sport shooting and is a regular on the shooting range.