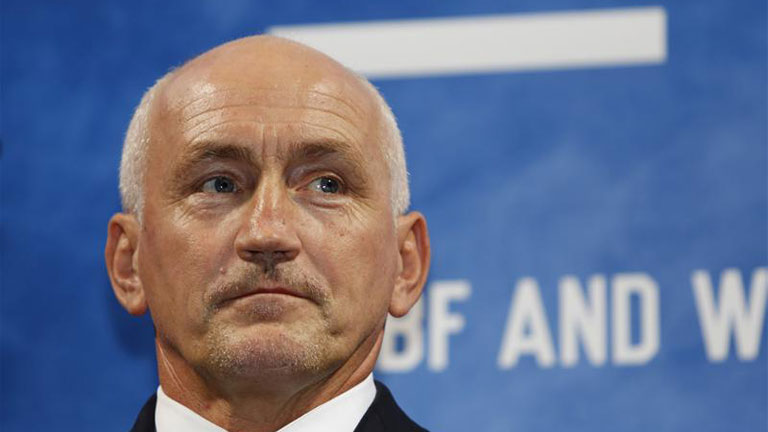 Editor’s note: This article originally appeared in the December 2016 issue of THE RING Magazine. Carl Frampton faces Leo Santa Cruz in a rematch Saturday in Las Vegas. To subscribe to the print or digital editions, click here.

It’s Friday, Aug. 12 and newly-anointed WBA featherweight titleholder Carl Frampton, a 29-year-old from Belfast, Northern Ireland, prepares to soak up acclaim from thousands of fans at Belfast City Hall. But he’s stumped by a slight problem: He has yet to receive his title belt. Fifty-five-year-old Barry McGuigan, meanwhile, his longtime manager and a former WBA featherweight champion in his own right, has an idea, one that requires him to locate the belt he won back in 1985, dust it down and then hand it over for Frampton to use throughout his homecoming celebration. And the new? Hardly. Still, Frampton appreciates his fellow Irishman’s generosity and later poses for photographs with the belt slung over his shoulder and wrapped around his waist. Most who see the pictures have no idea the belt belongs to McGuigan. It’s their little secret.

“They look pretty much the same but Barry’s looks a bit older,” Frampton says. “It’s 31 years old. It’s not going to look great.”

Oh, but it did. Look past the scuff marks and frayed leather and the spectacle was great in every way possible. Think about it. Barry McGuigan hands over the actual title he won in 1985 to the man he has nurtured since 2009, a man who became part of the belt’s lineage when he impressively dethroned Leo Santa Cruz on July 30 in Brooklyn, New York. How poignant. How powerful. How perfect.

“It’s a nice feeling, it really is,” Frampton says. “I knew it would be nice to win that title back, but, no disrespect to Barry, I was doing this for myself and for my family and for the whole team. I was doing it for us all.”

Barry McGuigan was 24 years of age when he defeated the great Panamanian Eusebio Pedroza over 15 rounds at Loftus Road Stadium in London to lift the WBA featherweight belt. As a career high point, the night of June 8, 1985, had everything. It had the fighter’s father, Pat, singing “Danny Boy” before a crowd of 26,000, it had 19 million people watching at home, it had an aging yet still supreme champion dragged to Britain and stripped of his belt in a bear-pit, it had 15 rounds, it had drama, it had Irish Catholics and Protestants uniting in the name of one man, it had Barry, the Catholic, and his wife Sandra, the Protestant, and it had the ghost of Young Ali, an African boxer who tragically passed away following a fight with McGuigan in ’82, overseeing it all. (Indeed, the fight was dedicated to Ali.)

Last year, on its 30th anniversary, Barry gathered some of those closest to him in a house in Battersea, not far from the McGuigan gym, and played the Pedroza fight in its entirety on a television screen. Ostensibly a history lesson, Carl Frampton showed up for class, as did a number of other young boxers from the gym, all keen to learn, all keen to see Barry at the peak of his powers. Other McGuigans were also present. One of them, Barry’s son, Shane, is Frampton’s coach and has this year emerged as one of the most astute young cornermen in the sport. He too was an interested observer.

“I had to move my head so much in that fight,” Barry remembers, shifting his head now, side-to-side, some 31 years later. “Pedroza kept hitting me on the Adam’s apple and my neck was so sore after the fight. I couldn’t swallow for about three days.

“In the end, I subdued him because I kept so busy. I knew he needed time and liked to slow the pace down, and I knew the only way to beat him was to make sure he didn’t have that luxury.

“I remember hurting him with a left hook to the body in the fifth round,” Barry continues, winding back his left hand to mimic the shot, “boom, boom, boom! Pedroza gasped. He was impassive and kept a poker face, though, so I wasn’t sure I’d properly got him. He shoved me away and the bell went. He then lifted his leg up before walking back to his stool and that was the sign. I knew I’d got him. I could see my brother, Dermot, at the side of the ring getting animated and jumping up and down. We were getting to him.”

Frampton watched McGuigan watch the fight that day in Battersea and marveled at his ability to recall the finer details and lose himself in the drama all over again. “He wasn’t sitting still at any moment,” Frampton says. “He was moving his head like he was still fighting Pedroza. Also, it was very emotional for Barry because he saw images of his brother, Dermot, who was a big part of his team and is no longer with us.

“To be honest, that fight means so much to Barry and to a whole generation. Nineteen million people watched it on television. We’re never going to get those numbers again because of the way TV is these days and the fact the big fights are on pay-per-view. I try to explain to people my age just how popular Barry McGuigan was but it’s difficult unless you were around at the time. It’s a bit like if David Beckham walked past you in the street. That was what it was like for Barry back then. That’s the sort of fame he had.”

It’s this kind of fame that led to Frampton being lazily compared to McGuigan for the majority of his own seven-year professional career. That and Ireland’s hunger for The Next McGuigan. “First of all, Carl is not me,” says McGuigan. “He is a different fighter to me. He has more tools than I ever had. He’s perhaps not as good as I was coming forward but he’s an awful lot better than I was boxing on the retreat and using his skills. The bottom line is, he’s his own man.”

“It’s nice to be compared to Barry but it’s lazy journalism to compare our fighting styles,” adds Frampton. “We don’t have a similar style at all. Being talked about in the same breath as Barry is great, though. It’s an honor. But it’s just as nice to step out of his shadow and be considered a good fighter in my own right.”

The idea of eventual separation (from comparisons rather than contracts) following lengthy association has been the aim ever since McGuigan first set eyes on Frampton at Ireland’s National Stadium in 2007 and decided there and then that he wanted to be part of his journey in the pros. “I spotted this amateur kid at featherweight, my old weight division, and was immediately attracted to him,” he recalls. “I thought, ‘Wow, this kid can fight.’ He was brilliant on his feet, had great in-and-out movement, could punch in bunches, pick single shots and seemed to have it all. He stood out like a sore thumb. I’d had a thousand people over the years ask me to manage them and I just looked at this guy and said, ‘I want to look after this guy.’ I didn’t know where he was from. It didn’t matter.”

Later, McGuigan and Frampton posed together for a picture. It’s tough to decipher who asked whom. McGuigan then discovered Frampton hailed from Belfast’s Midland Boxing Club, a gym run by Kenny Beattie, a man with whom McGuigan went to the Commonwealth Games in 1978, and also that Frampton was a Protestant kid dating a Catholic girl. Fate, Barry discerned, must surely have brought him and Frampton together.

“When it was announced Barry had signed me, I remember saying at the press conference something like, ‘If I haven’t won a world title by the time I finish my career, I will be very disappointed.’ That was always the goal,” says Carl. “I knew I had it in me.”

With McGuigan by his side, often sitting ringside bobbing his head as though Pedroza’s still aiming for his throat, Frampton landed his first world title, the IBF’s junior featherweight crown, in September 2014 with a comprehensive points win against Spain’s Kiko Martinez, and then 17 months later added Scott Quigg’s WBA junior featherweight strap to the collection via split decision at a sold-out Manchester Arena. “Quigg, in my opinion, was a Sky television hype-job,” Frampton says now. “I’m just going to be honest. I don’t think he’s a very good fighter. I was winning rounds in the first half of that fight without really doing anything. I didn’t have to get out of second gear. I don’t know what he was doing.”

“That has been mentioned because I beat Santa Cruz and Quigg, but I don’t think I’m there yet,” says Frampton. “I believe that with the right fights I could be, though. There are still big names for me to fight and I have the potential to move up to (junior lightweight) and win a world title in a third weight division. I’d like to do that and stand on my own. Steve Collins is the only other boxer from Northern Ireland to win world titles in two weight classes. So, if I did it in three, that would be amazing.”

McGuigan calls his own time at the top “all too fleeting.” He considers Pedroza at Loftus Road his best night, a 1985 win over Juan Laporte his best performance and the defeat to Steve Cruz in ’86, amid the sweltering desert heat in Las Vegas, his bravest performance but very worst night.

Frampton, unbeaten in 23 fights, wants more, of course, but is just as wise to and envious of the fact McGuigan retired from boxing at 28 and is now considered one of the lucid and lucky ones. “Barry packed it up early and got out at the right time and I admire him for that as much as anything,” Frampton says. “He listened to the signs.

“I’m 29 now and still feel like I’m getting better. The last fight was probably my best performance. But I understand it’s a hard game and Barry felt burnt out by the training and the fighting and wanted to spend more time with his family. I feel like I’m missing out on my kids growing up too. I feel like I’m missing out on a lot. That’s why any sign of deterioration, or me going downhill, or losing the speed, and I’ll get out. If I’m still a fighter when I turn 33, I’ll be very disappointed.”

Forget the belt and the shoehorned style similarities, most of which don’t exist, Carl Frampton and Barry McGuigan are bound by one time-honored, universal boxing dream – to remember and to be remembered. So far, the signs are good.