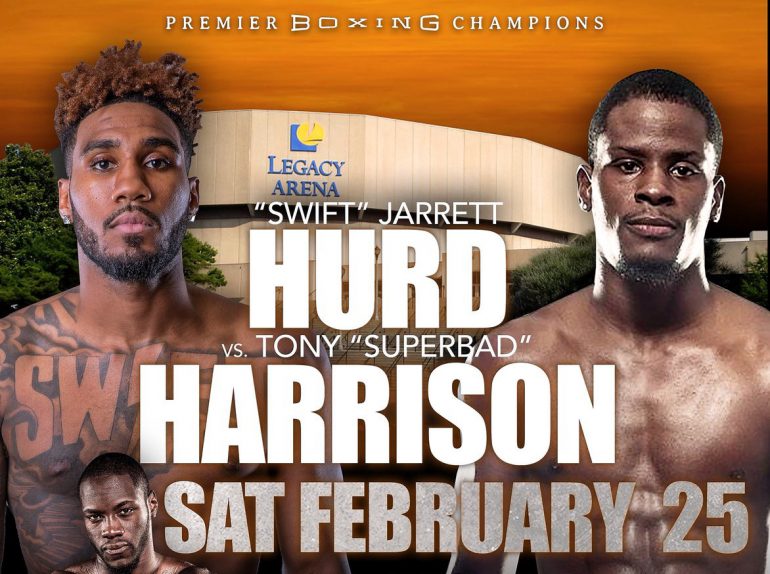 Really and truly, the 154-pound division has fashioned itself in the last six moths or so into a quite compelling weight class. It went up a notch when Jermall Charlo kayoed fellow young gun Julian Williams last month, and with the presence of the Charlos and Demetrius Andrade and rising Erickson Lubin and for ever how much longer Canelo Alvarez stays there, 154 is a hot spot.

Another athlete could leap off the page and make that neighborhood even buzzier, with word that Tony Harrison of Detroit will tango with Jarrett Hurd of Maryland on Feb. 25th, in Alabama, on the undercard of a Deontay Wilder title defense versus Pole Andrzej Wawrzyk.

This scrap is an IBF title shot eliminator. Jermall Charlo holds that belt, though he’s threatened to go to 160. Harrison is rated No. 2 while Hurd is No. 6. A win here, especially in a shot manner, will stir a fan mini frenzy, to see the victor in with Jermall.

The Harrison versus Hurd scrap on a PBC event represents the new reality in the PBC sphere, that playtime is over, and everyone has to be done with introducing themselves to boxing nation; now they must make an impact by taking 50-50 bouts and letting the chips, or hopefully the other guy, fall.

Harrison was a Manny Steward protege, and at 26, holds a 24-1 record, with 20 KOs. He impressed beating Sergey Rabchenko last July in Brooklyn, scoring a ninth-round TKO win. He’s won three straight, over Cecil McCalla and Fernando Guerrero, too, after taking his first L, to Willie Nelson in 2015 (TKO9). He’s a positive presence in his hood, and reps prizefighting pridefully. It looks like he’s back on track mentally after tasting the sour taste of the L.

He can sometimes be too patient, and leans too much at times, if we’re nit picking. He has an active jab, oftentimes, and does well coming forward. He will feint at Hurd, and Hurd will need to be aware he has quick hands, and is proficient at timing a foe coming in. Nelson had luck when he imposed his physicality on Harrison and backed him up. Might Hurd, who darn well does invest smartly to the body,  think Harrison is prone to slowing down late in the game and being susceptible to having trouble in the deep waters? Or was it an aberration that Nelson was able to dig in with power shots in round 9?

Hurd is also 26, and owns a 19-0 with 13 KOs mark. The Marylander stopped Frank Galarza in 2015, and then Oscar Molina,  then 13-0-1 before taking out Jo Jo Dan in November. He’s more refined and skilled than a mere 19 pro fights would normally indicate. He likes to advance, has fast reflexes, long limbs, and ask Molina about his right uppercut. He is ultra patient, so impressive for his youth. Harrison will have to be wise to being countered and will have to know one, two, three jabs will be thrown at him by a very smooth hitter. Hurd can work outside, but also is comfy in tight, because he stays relaxed and aware and can generate power from close quarters.

The Hurd v Harrison tussle will run on Fox, before the Wilder title defense, for the record.