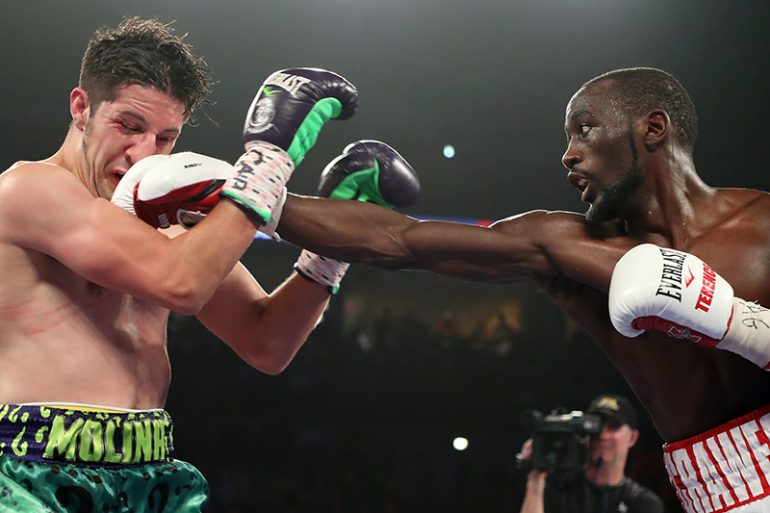 John Molina is a pretty good fighter. Terence Crawford is looking more and more like a very special one. Thus, the result of their fight was predictable.

The always-game Molina never stopped moving forward but the more he stalked, the more punishment he took. And he took a lot, which is really all he accomplished.

The crowd in Omaha, Crawford’s hometown, seemed to appreciate the vicious beating and the beauty of Crawford’s skill set. However, boxing fans from any other city probably were less enthusiastic with an obvious mismatch after the first few rounds.

The vast majority of viewers had to be relieved when the slaughter was stopped at 2:32 of Round 8.

Crawford (30-0, 21 knockouts) was asked afterward whether the lopsided nature of the matchup could somehow sully his victory.

And what a fighter.

To be clear, the wipe out has more to do with Crawford’s ability than Molina’s lack thereof. Remember, Molina not only came in overweight, which might’ve been an advantage on Saturday, he also was coming off a unanimous-decision victory over Ruslan Provodnikov in June.

Molina (29-7, 23 KOs) is solid. Crawford is just that much better, as he demonstrated in all three of his fights this year. He stopped Hank Lundy in five rounds in February, won the RING title and unified two sanctioning-body titles by dominating Viktor Postol in July and then destroyed Molina on Saturday.

Crawford thinks he did enough in Saturday’s fight to clinch Fighter of the Year for 2016.

“Of course, of course. I showed everything in this fight,” he said.

Crawford would like a much bigger challenge next, Manny Pacquiao. A victory over the future Hall of Famer would enhance both his reputation and bank account but Pacquiao might not be willing to take the risk at this stage of his career.

No one will be surprised if he gets them.