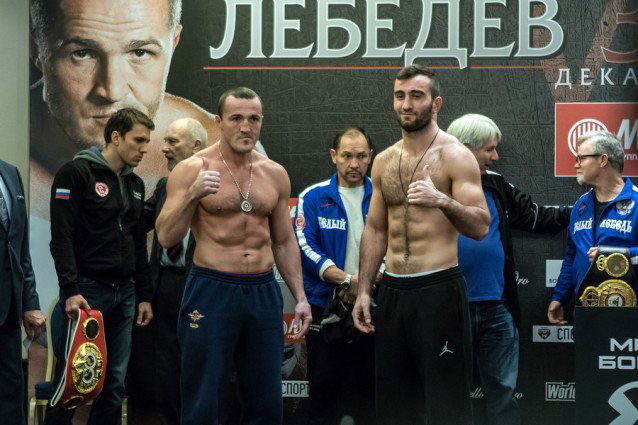 Unbeaten Russian Murat Gassiev (No. 10 last week) staked his claim as a major player at 200 pounds by earning a split-decision victory over countryman Denis Lebedev (No. 1 last week) on Saturday in Moscow.

As a result, Gassiev (24-0, 17 knockouts) moves up to No. 2, behind only Ukrainian sensation and new No. 1 Oleksandr Usyk. The cruiserweight championship is vacant.

Billy Joe Saunders (No. 3 last week) received a stiffer-than-expected challenger from unrated Artur Akavov but emerged with a unanimous-decision victory Saturday in Paisley, Scotland. Thus, he remains at No. 3.

Julius Indongo (unrated last week) stunned Eduard Troyanovsky (No. 4 last week), stopping the previously unbeaten Russian only 40 seconds into their fight Saturday in Moscow. Indongo, from Namibia, enters the Top 10 at No. 8. Troyanovksy drops to No. 10. Jose Ramirez (No. 10 last week) is pushed out.

We also used this opportunity to shuffle the 140-pound ratings slightly. Here’s the new Top 10:

Denis Shafikov (No. 7 last week) defeated Richard Commey (No. 5 last week) by a split decision in Moscow, Commey’s second consecutive split-decision setback against a top-level opponent on the road. He lost to Robert Easter in September.

Shafikov and Commey switch places in the ratings, the former moving up to No. 5 and latter dropping to No. 7.

Tevin Farmer enters the ratings at No. 10 after easily outpointing Dardan Zenunaj (unrated last week) on Friday in Philadelphia. Saul Rodriguez (No. 10 last week) drops out.