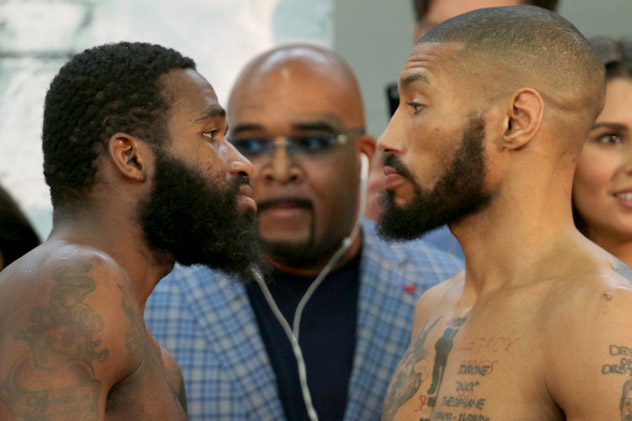 There is in fact life after Adrien Broner.

Nearly eight months to the day after Ashley Theophane was stopped by an overweight Broner, the Floyd Mayweather Jr.-promoted Theophane will step back into the ring. Theophane (39-7, 12 knockouts) is set to face Yakubu Amidu, who has lost four straight, in the main event Friday at the Sam’s Town Live! performance venue in Las Vegas, Mayweather Promotions formally announced on Tuesday.

“It’s been said that this is my redemption fight,” Theophane said in a prepared statement. “I have been faced with many challenges in my career, with my back up against the wall and have bounced back. This fight is like any other fight, and I plan to come out victorious.”

Broner stopped Theophane in the ninth round on April 1 at the DC Armory, ending an unprecedented week for Broner, who missed the 140-pound limit by .4 at the weigh-in and was stripped of his junior welterweight title. Broner was only allowed to participate in the fight after consenting with the Hamilton County (Ohio) authorities to turn himself in the following Monday to deal with charges of felonious assault and aggravated robbery. The charges were dropped in September. Despite the craziness surrounding Broner, Theophane couldn’t take advantage of his first title shot.

Amidu (19-8-2, 17 KOs) is rising a weight class to take on Theophane after campaigning as a lightweight for most of his career. Though he has lost four straight, it’s been to stellar opposition. Yakubu surrendered a decision to Jamel Herring in October of 2015; he lost on points to Jose Felix Jr. in June of 2015 while trading knockdowns; he retired after the sixth round against Ivan Redkach in January of 2015, and he lost a split decision to Chris Rudd in 2014 in ESPN’s Boxcino lightweight tournament quarterfinals to start the losing streak.

Sugar Shane Mosley: ‘Jake Paul is a YouTuber, but he’s training like a real fighter’

Politics, Problems, and Power at the New York State Athletic Commission: Part One

Murodjon Akhmadaliev: ‘I think that Daniel Roman is the most proven champion – this motivates me a lot’