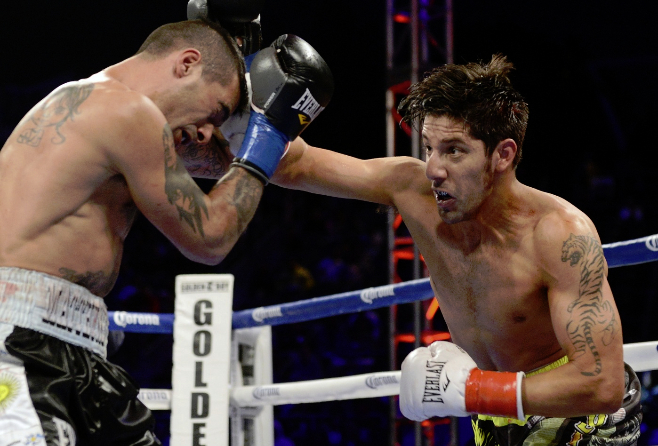 The last time John Molina Jr. challenged for a world title, he was vaporized in just 44 seconds by lightweight Antonio DeMarco in September of 2012. Regardless of the controversy over the stoppage, it was a mortifying result for Molina, regarded as one of the sport’s tough guys.

Molina rebounded from that disaster. He is a face-first climber with guts running through his veins, and he will face RING and unified junior welterweight champion Terence Crawford on Dec. 10 at CenturyLink Center in Omaha, Nebraska on HBO. It’s a second chance at a first title for Molina, who understands that while the past cannot be erased, it can at least be understood.

“I’ve learned to expect that no matter where I go in the world, that will always be hanging over my head,” Molina told RingTV.com on Tuesday of the debacle against DeMarco. “I hold the record for the fastest knockout in lightweight history in a title shot. It’s not one I’m very proud of. But I’m a better fighter because of it.”

That wasn’t noticeable early on. Molina would lose four of his next seven fights — all to top fighters — before bouncing back with an improbable win against elite brawler Ruslan Provodnikov in June. That vaulted him to his next Mission Impossible assignment against Crawford, who is fifth on RING’S pound-for-pound list. Molina is No. 8 at 140 pounds in RING’S rankings and is expected to lose, perhaps even in terrible fashion. Molina doesn’t expect another DeMarco debacle.

“If you’re going into this fight thinking it’s a landslide victory for Crawford, well, I’ll just tell you to tune in on Dec. 10 and watch and enjoy,” Molina said in a phone interview. “I’ve always been the underdog. And I think I’ve come back with the most upsets and comebacks in recent times. I think I’m one of the most dramatic fighters because you never know what’s going to happen in a fight with myself.” He added of past opponents who tried to deny Crawford, “I’m not Postol,” a reference to former titleholder Viktor Postol who lost to Crawford in July in wide fashion. “I don’t find our styles to very similar. All you can compare is our stature and that’s it.”

Molina (29-6, 23 KOs) has been keeping tabs on Crawford (29-0, 20 KOs) ever since he beat Breidis Prescott in 2013, sizing him up then as a possible future opponent. “I don’t want to say I see things that I can take advantage of,” Molina said of flaws he may have picked up in Crawford’s armor. “But every fighter has two hands and a heartbeat, just like me, so it’s going to be a very special night on Dec. 10.”

Molina was asked if he expects Crawford to start fast in the hopes of eliminating him in the first round like DeMarco once did. “I think Terence is going to come into the fight with a lot of tricks,” he said. “Terence Crawford moves extremely well and boxes and has a very high IQ in the boxing ring. I’m expecting the best Terence Crawford on Dec.10.”

And of course, Molina knows he will have to be at his best, perhaps even perfect to beat Crawford and capture that elusive first championship.