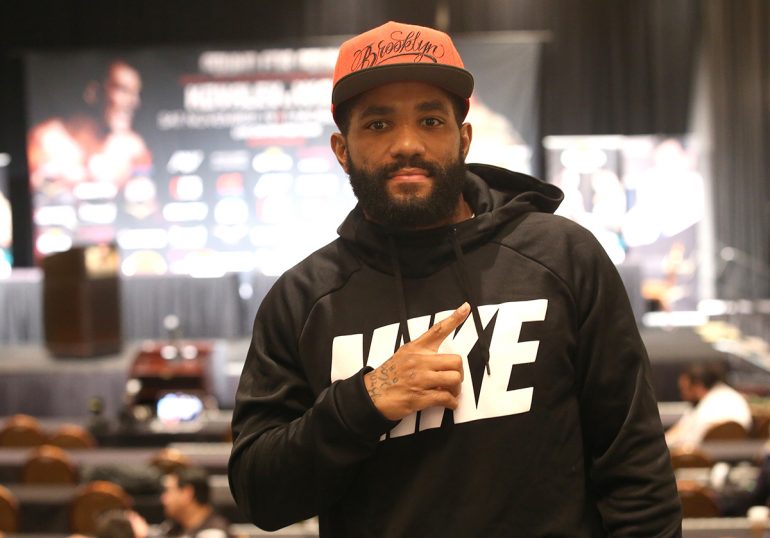 He is also becoming very good at throwing counter or lead right hands to the head. Whatever Stevens feels like throwing, whether it come in the form of a punch or a verbal jab, Stevens does it with assertiveness and for it to hurt.

He will look to land plenty Saturday night when he faces James De La Rosa at the T-Mobile Arena in Las Vegas. The 10-round middleweight bout will open the HBO Pay-Per-View broadcast, beginning at 9 p.m. ET/ 6 p.m. PT.

Stevens (28-5, 21 knockouts) is one of the more explosive punchers today. The Brooklyn, N.Y. resident has become synonymous with highlight-reel knockout wins.

He had one of those in his last fight on May 7, stopping Patrick Teixeira with a lead right hand to the head. Teixeira was dropped and, although he beat the count, was in no condition to continue.

Stevens could get another opportunity to thrill fight fans against De La Rosa, who has lost his last two bouts and three of his last five. Odds have Stevens a heavy betting favorite, but he is not looking past De La Rosa.

“(De La Rosa) is someone who is in my way,” Stevens told RingTV.com in a phone interview. “I’m taking this fight seriously. Whether this fight is easy or heard, he’s coming to win.”

If Stevens had it his way, he would be fighting fellow middleweight contender David Lemieux.

A Stevens-Lemieux fight would be a competitive bout between two aggressive punchers. There have been assumptions a fight could be made with the winner fighting the likes of Canelo Alvarez.

Instead, Lemieux ended up fighting Cristian Rios of Argentina on Oct. 15.

While he may be frustrated the jawing between the two, including on social media, has not produced a fight, Stevens believes the two will ultimately meet.

“We fought on the same card on May 7,” said Stevens, who is promoted by Main Events. “Lemieux would look at me in the hotel. He talks about me in interviews, but he doesn’t man up. He’s a little (expletive). When the fight is over (this) Saturday, I’m going to call him. Fans want the fight.”

“Let the winner fight Canelo. I’m all for that. Is he?”

Stevens’ newfound success could be traced to trainer John David Jackson. Stevens worked with Jackson in Oxnard, Calif., where he was able to enjoy the warmer weather and running along the beach.

While his uncle taught him how to box, Stevens credits Jackson with implementing more to hi skill-set.

“Jackson has added more to my repertoire. I’ve always had power, but I’m using my right hand more. I’m having more fun while I’m training.”

Life is great for Stevens at the moment. He could be a Lemieux fight or a world title fight away with a win over De La Rosa.

“I feel I’m at a rebirth of my career. I have a new trainer and a fresh start.”

“I know I could be a step away from a championship fight, but I’m taking my life and boxing one step at a time.”

Francisco A. Salazar has written for RingTV since October of 2013 and has covered boxing in Southern California and abroad since 2000. Francisco also covers boxing for the Ventura County (Calif.) Star newspaper, RingTV, and Knockout Nation. He can be reached by email at [email protected] or on Twitter at FSalazarBoxing