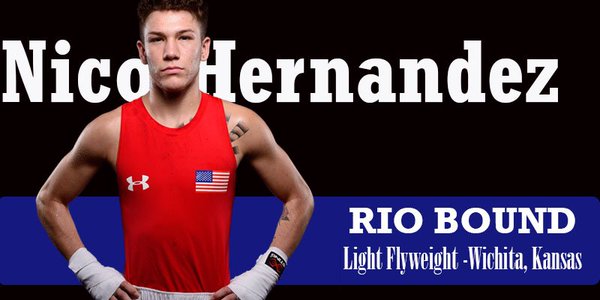 U.S. Olympic bronze medalist Nico Hernandez is set to make his pro debut on Dec. 10 underneath another Midwest product he hopes to emulate in Terence Crawford.

The 20-year-old’s father, Lewis Hernandez, confirmed a one-fight deal with Top Rank to fight on the Crawford-John Molina Jr. show at CenturyLink Center in Omaha, Nebraska. Hernandez remains a promotional free agent but his father and trainer expressed admiration for Top Rank in the hopes of following in the footsteps of Crawford, who they look up to because of his Midwest roots.

“This was a great opportunity for us to make his debut in the Midwest,” Lewis Hernandez told RingTV.com on Friday. “We know Crawford and think he’s a great fighter, one of the best. So it’s an honor to fight on the same card as him. It’s also a good opportunity for Top Rank and others to take a good look at him to show what he can do.”

Crawford is a product of Omaha while the Hernandez family is from Wichita, Kansas. The elder Hernandez expects four to six busloads of friends and family to make the nearly five-hour drive to see him fight. Hernandez, who claimed a bronze at light flyweight, will campaign at junior bantamweight, seven pounds heavier; no opponent has been selected yet, he said.