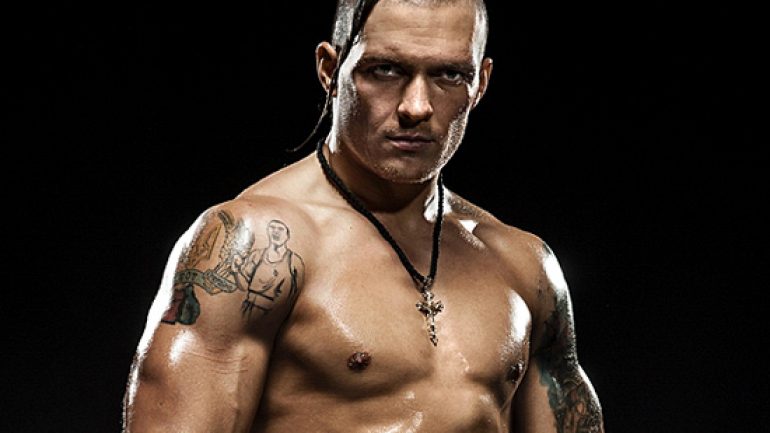 Promoter Tom Loeffler didn’t have to look far to find parallels between cruiserweight titleholder Oleksandr Usyk and another decorated champion.

Exactly three months after he won a cruiserweight title, Usyk will make his first defense on the Dec. 17 HBO broadcast headlined by Bernard Hopkins’ farewell fight against Joe Smith Jr., it was announced on Wednesday. Usyk, a former Ukrainian Olympic gold medalist who is a stablemate of Gennady Golovkin, is set to open the telecast against Thabiso Mchunu in his U.S. and HBO debut at The Forum in Inglewood, California.

In the same way that Golovkin made a splash with his HBO unveiling against Grzegorz Proksa in 2012, Loeffler hopes that Usyk has a similar effect in his maiden voyage with the network. The co-feature to the Hopkins-Smith tripleheader is a featherweight bout between former U.S. Olympian Joseph Diaz Jr. and Horacio Garcia.

“I just see his potential in being the next star in boxing,” Loeffler told RingTV.com on Wednesday of the 29-year-old southpaw. “His character and personality outside the ring — his entertaining style inside the ring — I just think he’s going to provide a lot of entertaining fights for the boxing fans around the world. We’re looking at the same situation with Usyk (as with Golovkin on HBO). We’ll build Usyk and try to get him as much exposure as we can in the big media markets, similar to what we did with Gennady. This fight is in Los Angeles but I can easily see him fighting in New York in the near future, as well.”

The 6-3 Usyk (10-0, 9 knockouts) will look to further his legend after he dominated previously undefeated Krzysztof Glowacki on Sept. 17 in Poland to wrest away the WBO title, breaking Evander Holyfield’s record of fewest fights (12) before winning a cruiserweight title.

“This is a great opportunity,” Usyk said in a prepared statement. “I’m very excited to fight for the first time in the United States and on HBO. After winning the world title in September, fighting in America was the next goal and I promise the fans in Los Angeles and those watching on HBO a great performance.”

The bout with Mchunu (17-2, 11 KOs), who once upset Eddie Chambers is 2013, is meant to showcase Usyk’s skills to a national audience. Moving forward, Loeffler can see Usyk eventually facing the other titleholders in the division, such as Denis Lebedev (IBF/WBA) and Tony Bellew (WBC) before moving up to heavyweight. Loeffler also mentioned Marco Huck as another possible foe at cruiserweight. (Lebedev will face Murat Gassiev, who is trained by Golovkin trainer Abel Sanchez, on Dec. 3 in Moscow.)

“From my standpoint, I think Usyk has the size, the talent, the skills to make the transition when he’s ready to be a small heavyweight, using his boxing technique, his speed and movement in the ring to also become a heavyweight champion,” Loeffler said. “But right now he’s focused on the cruiserweight division and there are some great cruiserweights out there.”