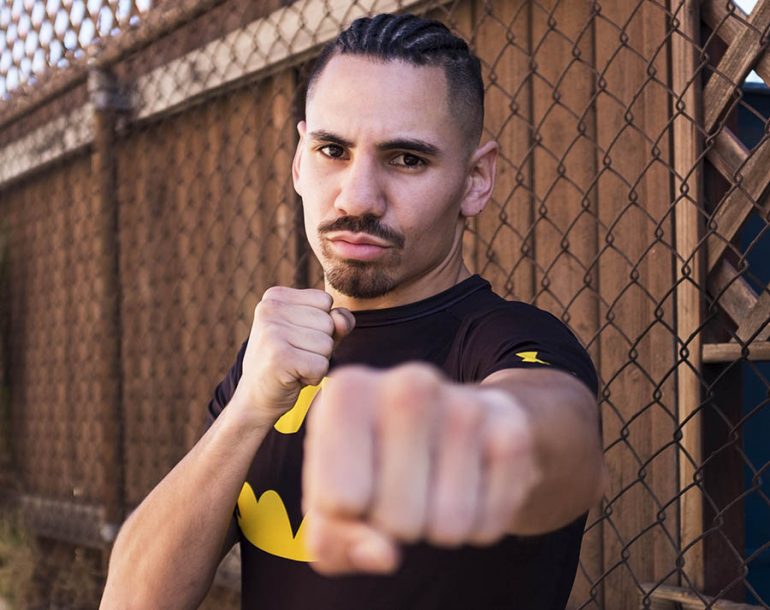 As night dropped on another 80-and-sunny November day in Los Angeles, LA Fight Club again convened at the Belasco theater, and it was local featherweight Manuel Avila winning the main event with a split decision over Jose Ramirez in an ugly 10-round bout.

The hyper-aggressive Ramirez, of Mexicali, Mexico, got a warning in the first round for weaponizing his skull, but the taller “Tino” stayed composed under pressure, grappled on the inside and tried to score from a distance.

By Round 4 Ramirez’s lunge-and-maul technique was beginning to get under Avila’s skin and on the crowd’s nerves as a few boos filtered through the partisan cheers. Clearly the underdog was convinced that victory lay deep inside Avila’s personal space, not the hearts and minds of the crowd, and wouldn’t hear otherwise from referee Lou Moret. When he wasn’t headlocking, arm-barring or otherwise trying to rough Avila up, Ramirez burrowed his head into his foe’s chest and threw blind punches at whatever was within reach.

To be fair, there were a few legit punches from Ramirez also. He led off Round 5 with a flush overhand right that seemed to stun Avila, but later had a point taken for hitting on the break. Avila continued to land the prettier shots here and there, but simply couldn’t get any breathing room to work his combos and looked lost. Like a bulldozer stuck in gear, Ramirez ignored any warnings and continued to do his thing with no effective resistance. In fact, in the final rounds, Avila seemed to give up on the idea of fighting and just tried to land one good shot before again falling into the octopus’ grip. And most of the time he didn’t land even that. Ramirez lost another point at the start of Round 10 after putting Avila in a headlock. It was not good. For anybody.

When the fight ended, Ramirez (28-7, 16 KOs) ran from corner to corner proclaiming his victory and people were too confused to even boo. Moret barely acknowledged him.

The co-main event was between Diuhl Olguin and Emilio Sanchez, who won the junior featherweight contest by unanimous decision.

Olguin (11-5-3, 9 KOs), of Guadalajara, Mexico, had the craziest stare of the night but might’ve been a little too intense for his own good; his body looked really wired and his movements were stiff. It made him an easy target for the quicker Sanchez, but he still slipped in some heavy left-hook counters when the local favorite left himself open.

Olguin went southpaw for a couple rounds but seemed to have less success, so he switched back and again found Sanchez with some effective shots. His rigidity remained a liability, but it was impossible to call Sanchez’s offense very meaningful.

Sanchez (13-0, 8 KOs), of Pacoima, California, turned it on in the eighth and landed more big punches than he had in the previous seven rounds, but Olguin responded and the best round of the fight broke out.

Setting the theme of California vs. Mexico in the six-round TV opener, junior featherweight Pablo Rubio Jr., of Whittier, put a beating on Francisco Dominguez (7-9, 1 KO), of Juarez, and won a unanimous decision.

Rubio (8-0, 3 KOs) kept Dominguez’s defense active with a multi-leveled attack and kept his own upper half well protected despite having several more inches of height to cover up. Dominguez picked up his own offense in Round 2 and fared a bit better, but the early signs of fatigue were already there.

The two chopped at each other in the third, but Rubio’s higher workrate and the variety of angles he used continued to drain the steam out of Dominguez’s arms. By Round 4, the Mexican was clearly overwhelmed and underconditioned, but he hung tough even while getting nailed with rapid-fire uppercut/bodyshot combos in the fifth. Another three minutes seemed too much to ask, but Dominguez endured until the final bell.

A four-round featherweight bout between local fighter Luis Coria and Juan Bryand, of Texas, concluded strangely after Bryand suffered some sort of injury to his right elbow and was counted out one second before the end of Round 1. The lanky Coria, in his second pro fight, was doing fine with a variety of punches when suddenly Bryand (1-6-1) slumped in his corner clutching his arm in obvious pain. The cause was unclear from ringside, but word was that a previously injured tendon in Bryand’s joint had been clipped by a body shot.

Tenochtitlan “T-Dog” Nava brought a ton of chanting fans to watch him fight, and they went home happy with a majority-decision win, but it wasn’t his best night. Nava (4-0, 1 KO) tried to reach fellow junior lightweight Ricky Vasquez (6-3-1, 2 KOs) but often came up short as his rangier opponent stayed on the outside and countered. Most of the work was instead hammered out in the ubiquitous clinches (in Round 3 Vasquez picked Nava up and looked like he was considering a suplex). Things were working out pretty well for Vasquez, but not well enough to spend the last round leisurely riding his bicycle at a safe distance, which is what he did — and it cost him. Scores were 38-38 and two 39-37 cards for Nava.

The show opened with lightweight Azat Hovhannisyan knocking out the overmatched Israel Rojas at the halfway point of Round 1. Hovhannisyan (10-2, 9 KOs), who hails from the Armenian enclave of Glendale, California, punctuated his all-powershot assault with a left hook that landed just above Rojas’ beltline. As soon as the pain had traveled from his liver to his brain, Rojas (9-14, 3 KOs) crumbled and the fight was waved off.