Time for Melindo to get serious ahead of interim title fight 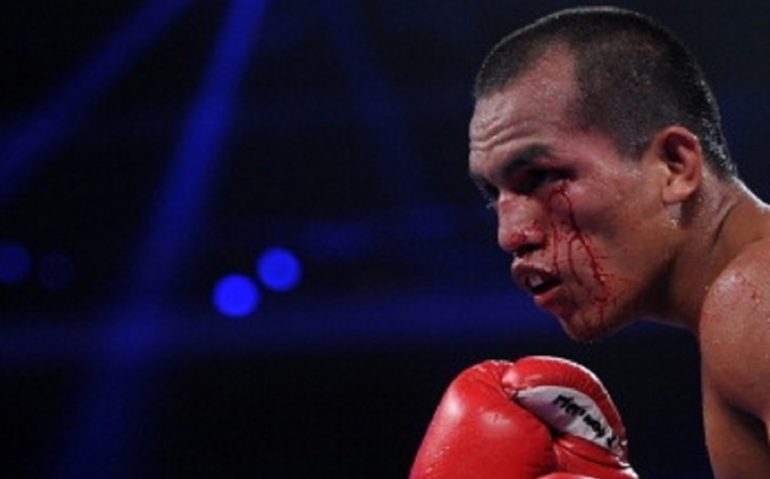 MANILA, Philippines – The best – and perhaps last – chance for Milan Melindo to become a world champion will be a two-step process, with the first step coming on Nov. 26, when he fights Thai Fahlan Sakkreerin Jr. for the interim IBF junior flyweight title at Cebu Coliseum in Cebu City, Philippines.

Melindo (34-2, 12 knockouts) finds himself nearing a third world title opportunity after an eliminator with ex-champ Javier Mendoza, who beat Melindo in a headbutt-shortened fight in May of 2015 before losing the 108-pound title to Akira Yaegashi last December, was canceled due to Mendoza sustaining a back injury in training. Melindo, rated No. 5, was thus the highest available challenger for Yaegashi, but the Japanese fighter had sustained a torn rotator cuff in a tougher-than-expected defense against Martin Tecuapetla this past May and informed the IBF that he wouldn’t be ready to go in time for an autumn defense.

IBF Championships Chairman Lindsey Tucker told RingTV.com in an email that Yaegashi has a “medical exception” due to the injury until March 29, 2017. “I expect Yaegashi to defend the title as required,” said Tucker.

For Melindo, his immediate concern centers on his own inconsistencies. For all of his promise, the 28-year-old from Cagayan de Oro City, Philippines has fallen short of the top level at flyweight and junior flyweight. He made a brave stand in his 2013 decision loss to then-WBA/WBO flyweight titleholder Juan Francisco Estrada, rocking him in Round 1 with a left hook before surviving a late onslaught to make the final bell.

In two subsequent outings since the Mendoza loss, Melindo fought a careless fight and nearly lost to an unknown Mexican Victor Emanuel Olivo, edging out a split decision. Then this May, Melindo missed weight by nearly five pounds and failed to impress in a technical decision win over Maximino Flores, who took the fight on two weeks notice after replacing Mendoza.

“It’s nothing. It happens sometimes in boxing,” Melindo tells RingTV.com of his weight flop.

After Melindo missed weight, promoter Michael Aldeguer of ALA Boxing could only shrug when asked what had happened. After the Olivo fight, Aldeguer wondered aloud about Melindo’s focus. “Milan has his own mind. I think we need to sit down with him and see what’s in his head. Right now it’s either he wants to move forward or he wants to fight entertaining fights.”

A win over the 23-year-old Sakkreerin (31-4-1, 16 KOs) would put Melindo on the path towards fulfilling some of the promise with which he turned pro in 2005. Sakkreerin, a long-armed counter-puncher with a three-and-a-half inch height advantage over Melindo, scored his lone significant win in 2013, knocking out former WBA strawweight titleholder Ryo Miyazaki in three rounds before losing a decision to Takuma Inoue, who was fighting just his second pro fight.

Sakkreerin lost a technical decision to Katsunari Takayama for the IBF strawweight title in April of 2015 but has beaten four journeymen since then.

“I know his style, he’s good. Basic style. He knows fundamental basics in boxing,” said Melindo, who is rated No. 6 at 108 pounds by THE RING.

Aldeguer has hinted that this could be the last shot Melindo has at the top, saying it was a “big decision” to pursue a belt at 108 pounds after Melindo blew the weight so big his last time out.

Melindo says he returned back to training six days after the Flores fight and has rededicated himself to his career.

“It’s a real world championship fight. I’m really confident to get my weight easily. This is the moment I waited for,” said Melindo.

The undercard for the event being billed Pinoy Pride 39 will feature the return of junior featherweight Albert Pagara (26-1, 18 KOs), who will make his first appearance since suffering his first defeat, an eighth-round stoppage against Cesar Juarez in July. The 22-year-old will face Ghanaian Raymond Commey (16-3, 9 KOs) in a 10-round bout. Older brother Jason Pagara (39-2, 24 KOs), who fights in the junior welterweight division, will face the heavy-handed but chinny Jose Alfaro (28-10-1, 24 KOs) in a 10-round bout.

Alfaro won the vacant WBA World lightweight title in 2007 with a decision win over Prawet Singwancha but lost it in his first defense to Yusuke Kobori in three rounds. The Nicaraguan has lost to many name fighters, including Antonio DeMarco and an aging Erik Morales, with seven stoppages among his defeats.