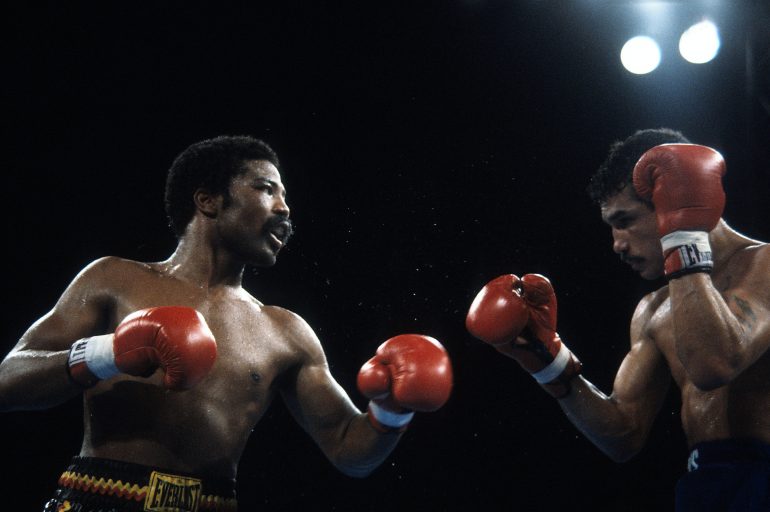 Aaron Pryor's epic first showdown with Alexis Arguello was The Ring's selection as Fight of the Decade (1980s). Photo by The Ring/ Getty Images
10
Oct
by Anson Wainwright

Note: This edition of “Best I Faced” originally appeared in the April 2013 issue of THE RING Magazine.

Aaron Pryor is considered by many to be one of the greatest fighters who ever lived.

“The Hawk” was a reported 204-16 as an amateur and narrowly missed fighting for the U.S. in the 1976 Olympics. As a pro, between 1976 and 1990, he is fondly remembered as a marauding punching machine who drew comparisons to the legendary Henry Armstrong.

Pryor (39-1, 35 knockouts) won the WBA junior welterweight title in 1980 by knocking out fellow Hall of Famer Antonio Cervantes in four rounds. He held the title until 1983, making eight successful defenses. He beat a number of very good fighters but he is defined by his two fights against another Hall of Famer, Alexis Arguello. In 1982, the rivals waged war for 14 brutal rounds before Arguello succumbed to Pryor’s swarming attack in THE RING Magazine’s Fight of the Decade. Pryor also won the rematch in 1983, this time in 10 rounds.

He vacated the WBA title before winning the inaugural IBF championship in 1984 and made one successful defense. He retired in 1985 but two years later returned to suffer his only loss, a seventh-round TKO against Bobby Joe Young in 1987. He retired for good in 1990 after beating three journeymen.

Today, Pryor, 57, is a regular attendee at the International Boxing Hall of Fame’s induction weekends. He graciously spoke with THE RING about the best he faced in 10 categories:

Alexis Arguello: He boxed and he punched with me in (the first) fight and a lot of people didn’t see what he was doing. It was a great fight; it went 14 rounds and he got stopped in the 14th, but up until then it was anyone’s fight. Alexis Arguello was all class.

Akio Kameda: I would like to say Akio Kameda from Japan. He was a good puncher and boxer, he was left-handed, he was 6-feet (tall) and he had a lot of heart. I wasn’t expecting to get hit by no left hand jab; he did a good job with his jab. I liked the way he boxed. I out-punched him but he was a good boxer.

Norman Goins: A guy I always remember is Norman Goins from Indianapolis. He was the one who was consistent. He was an international boxer as an amateur. We fought in 1973 in Denver at the Golden Gloves. He was one of the only guys who hit me and hurt me, and they stopped the fight. I was only 16; he was 20. He hurt me with a body shot. So when I was 20 and he was 24 we fought again in Cincinnati and I knocked him out in the ninth round. 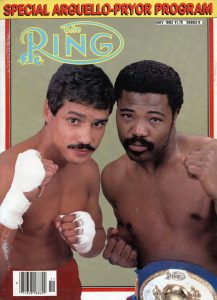 Arguello: Well, you know who had the best chin. I had 40 fights and 35 were knockouts. I think Alexis Arguello; I can never take anything away from him. If you look at that fight, Alexis took punches nobody else had before. He got hit time and time again on the chin and he shook it off and kept coming. A lot of guys I hit, they went down. Alexis in the first fight went 14 rounds and then the second fight 10 rounds. Fourteen rounds taking all the punches. He took a lot of punishment. I respect that.

Al Ford: Before I became a light welterweight, I had about 11 fights (at lightweight). There was a guy named Al Ford. I was thinking about what he had achieved in boxing. He already had an international name, in the amateurs and as a professional. He had lightweight hands.

Arguello: The person to me was Alexis Arguello; he had the quickest feet I ever saw.

Arguello: I think Alexis Arguello was the smartest fighter I fought. He was fighting for his fourth world title; he had won three already. I take nothing away from him.

Arguello: I always said if I’m going to die, I’m going to die right here in the ring cause this is what I know how to do. This is what I love. I think (Arguello) thought the same way. The longer the fight went, the harder it got. I was shocked. I had a lot of energy throwing punches but Alexis Arguello, he stayed in there. It was a real hard fight for 14 rounds.

Cervantes: Looking back on my career, I would like to say a guy by the name of Antonio Cervantes. Cervantes had 100 fights, held the championship for about 10 years (in two separate reigns) until he fought me. He knocked me down in the first round, I got back up and knocked him out. I think Cervantes was one of the greatest I ever fought.